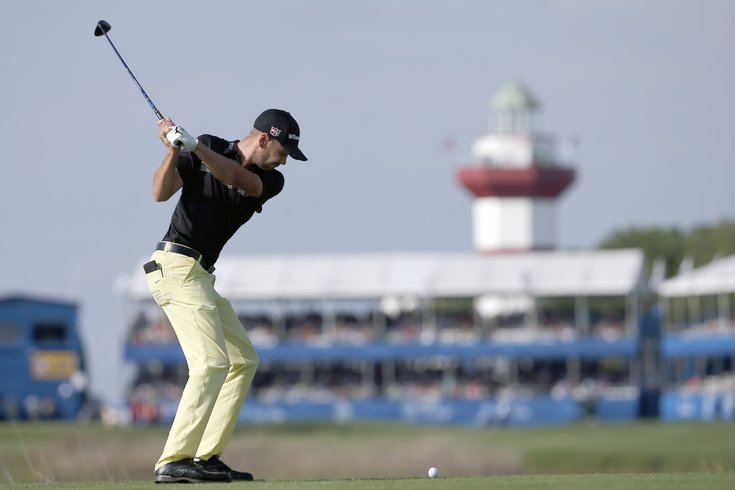 Troy Merritt hits off the 18th tee during the third round of the RBC Heritage tournament Saturday in Hilton Head Island, S.C.

Merritt shot a 2-under 69 to take a three-stroke lead over defending champion Matt Kuchar, Brendon Todd and Kevin Kisner. Jim Furyk, No. 10 in the world, was four shots behind, with Masters champ Jordan Spieth another stroke back and eager to win another jacket — this one tartan.

"I was starting to feel the fear and being afraid, like I would when I was an amateur," Merritt said. "It's not a bad fear; it's the fear of being caught. And I think it's worked for me in the past. "

Merritt finished at 14-under 199, two off the 54-hole scoring record set by Justin Leonard in his 2002 victory.

Furyk led a group another stroke behind after a 68, with Spieth five shots back, also following a 68.

Brice Garnett and Branden Grace were tied with Furyk in fifth. Garnett shot 65, and Grace 66. Bo Van Pelt was 9 under along with Spieth after a 67.

The pack of seven players at 8 under included 2013 winner Graeme McDowell, past British Open champ Louis Oosthuizen and former world No. 1 Luke Donald.

All of them will have to chase down Merritt, the 54-hole leader for the first time in his career. His best finish on the PGA Tour is a second in Memphis last year.

Merritt moved to the top and built a four-shot lead Friday with his course-record tying 61 at Harbour Town Golf Links. He lost nearly all of that on the front nine Saturday before regrouping.

Merritt explained how that fear calms him and reminds him not to press and take chances to keep the edge. "You go out there, play solid golf, take care of your business and you see how the other guy is doing," he said.

That worked in the third round after Merritt put a ball in the water on the par-4 eighth hole — "It was a spectacular splash," he said — leading to a double bogey and reducing his lead to a stroke.

That's when Merritt regrouped and responded, making a birdie on the ninth to regain his rhythm.

"I was going to try and get the momentum back," he said. "And I was able to do that."

Spieth thrilled the gallery with his bounce-back 62 on Friday and it was a full house around the first tee when the 21-year-old Texan got started. But Spieth played more like he did in Thursday's opening 74 than in the second round, fighting to put shots close and make putts on the way to his 68.

Still, it was Spieth's 18th time breaking par in his past 19 rounds, a monthlong run of success that included the Valspar Championship title, seconds at Texas and Houston and that record-tying Masters win from last week where he matched Tiger Woods' mark of 18-under from 1997.

And the fans continued to celebrate that accomplishment, shouting and applauding Spieth wherever he walked. One more round and Spieth can get some rest: He's not playing the Zurich Open next week.

Spieth isn't counting out his chances of another round like Friday's. "There's a low one out there and I think it's certainly possible" to win, he said.

Only Bernhard Langer in 1985 followed a Masters win with success at the RBC Heritage.

Kuchar overcame a double-bogey 5 after hitting a tree on the seventh hole to keep within reach of playing partner Merritt.

"There's a tree that hangs out over the green protecting that, and it was a Dikembe Mutombo swat away from the basket," Kuchar said. "That was tough."

Kuchar proved tougher, bouncing back with birdies on the next two holes.

Divots: The threat of rain Sunday had the tournament organizers moving up tee times. Groups of three will go off the first and 10th tees between 7:30 a.m. and 9:30 a.m. ... Tom Watson was first on the course Saturday and his five birdies on the first 14 holes had the 65-year-old thinking he might shoot his age. But Watson had bogeys on two of the final four holes to finish with a 69. ... Two-time RBC Heritage champion Boo Weekley shot a 77 on Saturday, his highest round ever in 35 career rounds at Harbour Town.