Meteor spotted in Bucks County sky and across the Northeastern U.S. 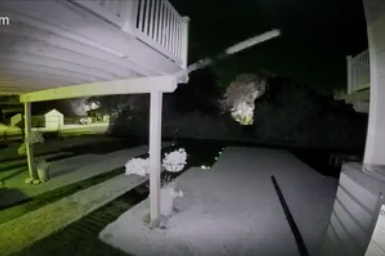 A meteor was captured by a front door camera in Bristol, Pennsylvania on July 24, 2019. The American Meteor Society received more than 350 reports of the fireball across 12 states.

More than 350 witnesses across the Northeastern U.S. reported seeing a bright meteor streak across the sky Wednesday night, including at least one person in Bucks County who captured the event on video.

The American Meteor Society, which collects and maps reports from across the country, said the meteor was reported in 12 states along the East Coast.

If you saw this event, please report it here: https://t.co/evqkWyLdwG

A video of the meteor was shared by Bristol resident Joy Borsavage, whose front door camera recorded the fireball zipping across the sky.

Another video caught the meteor in the sky above central Massachusetts, while the AMS uploaded two additional videos submitted by witnesses.

Fireball meteors can occur several thousand times each day in Earth's atmosphere, although most fall over the oceans or are obscured by daylight. It's a relatively common event to see a meteor disintegrate before reaching Earth's surface.

At least four widely reported meteor events have now occurred on the East Coast in 2019. The uptick in reports seems to be a matter of greater awareness of fireballs and more cameras deployed to passively detect them, as well as the work of organizations such as the American Meteor Society.