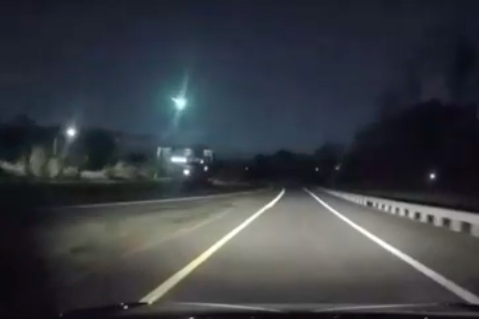 Several hundred witnesses spotted a fireball meteor along the East Coast of the United States around 11 p.m. on April 16, 2019.

For the third time this year, reports of a bright "fireball" meteor are streaming in from across the East Coast of the United States, including New Jersey and Pennsylvania.

The American Meteor Society noted receiving 325 reports of the fireball around 11 p.m. on Tuesday night. They separately noted another fireball reported over Germany last night as well.

A preliminary 3D trajectory computed by the AMS showed the fireball traveled from north to south before crashing into the Atlantic Ocean off the coast of Bethany Beach, Delaware.

One person who witnessed the fireball provided clear dashcam footage of the meteor streaming across the night sky. The AMS did not provide a location for the video.

Fireball meteors can occur several thousand times each day in Earth's atmosphere, although most fall over the oceans or are obscured by daylight. It's a relatively common event to see a meteor disintegrate before reaching the the Earth's surface.

On March 29, more than 250 witnesses reported another fireball sighting along the East Coast. Video of the meteor was taken from a camera stationed in Douglassville, Pennsylvania.

RELATED: Artist who blew off half of his hand with homemade explosive wages war for justice

Earlier, on Jan. 29, a fireball was spotted over West New York, New Jersey, with reports coming to the AMS from more than 150 witnesses.

While the uptick in witness reports this year seems unusual, it's likely a product of growing awareness of fireballs, more cameras recording them and the existence of organizations like the AMS to collect and analyze witness reports. Here's a look at both of the April 16 fireballs.

2 #FIREBALLS CAUGHT LAST NIGHT
- one over #Germany, one over #Maryland -
More info to come. pic.twitter.com/TLlfK7PfGq