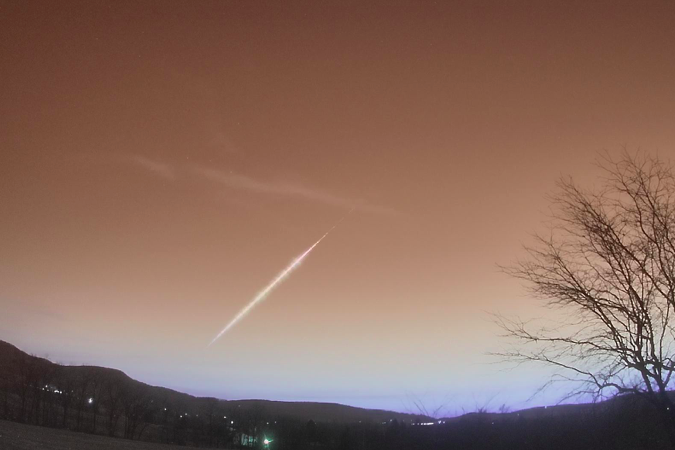 Meteor observed by camera in Douglassville, Berks County, around 6:13 am EST on Thursday, March 28, 2019. Witnesses across the East Coast described seeing a fireball in the sky that morning, including to people in Philadelphia.

For the second time this year, witnesses across parts of Pennsylvania and the East Coast have reported seeing a bright fireball dart through the sky — and once again, there's video evidence to prove it.

The American Meteor Society has received more than 260 witness reports of a fireball flashing possibly above the Ashokan Reservoir in New York on Thursday morning.

A video of the fireball submitted to the AMS came from Douglassville, Pennsylvania resident Peter Deterline.

A fireball is essentially another name for a very bright meteor. The AMS says they are generally brighter than magnitude -4, about the same brightness as planet Venus is to an observer in the morning or evening sky.

Fireball meteors can occur several thousand times each day in Earth's atmosphere, although most fall over the oceans or are obscured by daylight. It's a relatively common event to see a meteor disintegrate before reaching the the Earth's surface.

A look at the witness report map from Thursday's event shows at least two people in Philadelphia saw the fireball. One man said the fireball could be see from his windshield while driving north out of the city.

"Amazing experience," said another person from Northeast Philadelphia. "I have never seen anything like this before."

In January, another fireball was observed and captured by a camera in West New York, New Jersey. More than 150 witness reports from across the region came in to the AMS in the 24 hours after the meteor appeared.