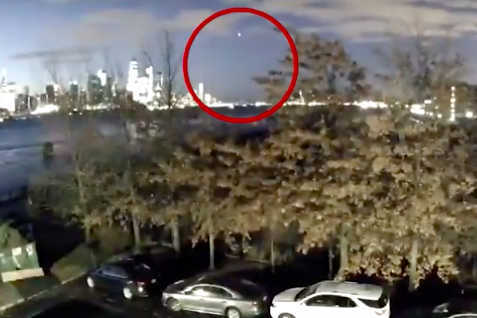 Fireball seen from West New York, New Jersey, on Jan. 9, 2018. The bright meteor was seen from New York down to North Carolina.

If you saw a giant ball of burning light fall toward Earth this morning along the East Coast, you're not alone. Multiple reports of a meteor have surfaced over the course of the day Wednesday, ranging north from New York through New Jersey, Pennsylvania and south to Virginia and North Carolina.

RELATED: Two New Jersey women may have found a meteorite while walking on the beach

165+ reports so far about a #fireball seen over the East Coast this morning at 6:35am EST. More info: https://t.co/AMVzEl5yWY - #meteor seen from #Delaware #Maryland #NewJersey #NewYork #NorthCarolina #Pennsylvania #Virginia pic.twitter.com/BvhddlIRlO

The best available video of the burning object was captured by a camera in West New York, New Jersey.

#Fireball over East Coast this morning. First video thanks to @JeremySettle
More info about this event: https://t.co/AMVzEl5yWY pic.twitter.com/TlRSTKDLmu

The non-profit American Meteor Society said most reports of the fireball were consistent with a timeframe between 6:35-6:45 a.m. on Wednesday morning. Other witnesses in eastern North Carolina and Virginia said they saw a red fireball with a "glowing white train" around 11:40 p.m. Tuesday night.

"Based on our first analysis, it looks like the event was a fireball," the AMS wrote in a blog post on the event. "A fireball is another term for a very bright meteor, generally brighter than magnitude -4, which is about the same magnitude of the planet Venus as seen in the morning or evening sky."

These fireball meteors can occur several thousand times per day in Earth's atmosphere, though most fall over the ocean or are obscured by daylight. It's a relatively common event to see a meteor disintegrate before reaching the the Earth's surface.

Several witnesses provided descriptions to the AMS, which were logged on an interactive map.

"It was very interesting and bright and I am sure I am not the only one who saw it," said Tracy S. of Bala Cynwyd. "Would love to know what it was."

"A GIANT WHITE BALL OF LIGHT WITH ONLY THE SLIGHTEST TAIL could be seen," added Trae S. of Feasterville-Trevose. "IT DISAPPEARED AS IT APPROACHED THE HORIZON LINE OF PHILADELPHIA."

Dozens of Twitter users also reported seeing the object along the East Coast.

Did you just see that fireball in the Eastern sky? #fireball #shootingstar #meteor

Bright #fireball #meteor as I traveled S on the Garden State Parkway. Just W of South, it came straight down and disappeared behind treeline. #awesome #shootingstar

O man! What a fireball that just was. Was traveling South toward work. Saw it for 4 seconds traveling away from Jupiter and Venus. #meteor #fireball #astronomy

As fascinating as it is, the AMS tracks these events all over the world. Here's one from the U.K. on Tuesday.

They're still happy for you, though.

"If you saw this one: congrats, it’s a nice way start the year!"