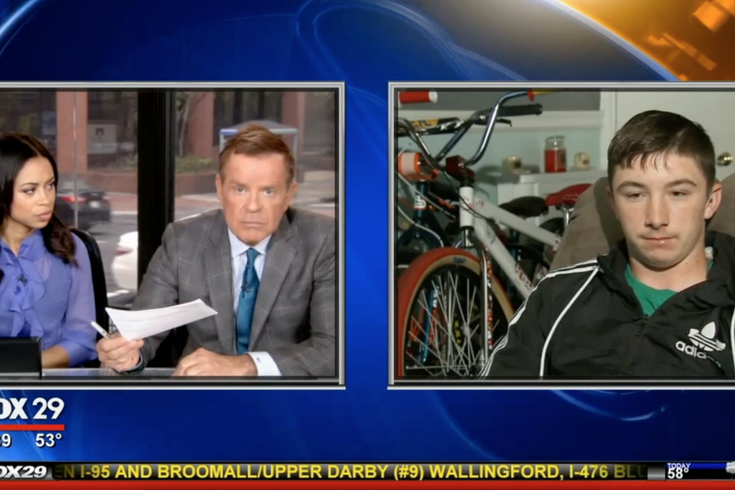 One thing is clear – FOX29's Mike Jerrick was not amused by the hundreds of teens who rode their bikes on the Vine Street Expressway and blocked traffic over the weekend.

"One Way" Corey Murray, the 16-year-old who is largely credited as the leader of Philadelphia's youth bike scene, appeared on "Good Day Philadelphia" on Tuesday morning to talk about the event, which was widely captured on social media.

Videos show hundreds of young people riding bicycles along I-676 – aka the Vine Street Expressway – in Center City on Saturday evening.

The Philadelphia Police Department said there were no injuries or arrests related to the ride as of Tuesday, while FOX29 in a broadcast Monday reported that the event was in celebration of Murray's birthday.

An Instagram picture on Murray's profile – he's got nearly 95,000 followers – displayed a flyer promoting a group "birthday rideout" on Saturday.

During the "Good Day" interview, Jerrick and co-host Alex Holley first asked Murray several easy questions – like, how long he's been riding and why he helped organize the ride.

Then Jerrick said, "So, let's get into this," and his questions got more pointed – he asked Murray if he's ever been arrested; what his grades are like at South Philly High School; and if he was aware of how dangerous the stunt was. (Watch the FOX29 "Good Day" segment below.)

Jerrick interrupted, "Well, I don't think anyone really gives a rat's ass ... Excuse me, gives a darn ... about if you guys get injured, I think we're more worried by drivers being injured. All of us being injured, not you."

"I mean, we've got control of our bikes so as long as they don't try to come near us, they're good," Murray replied.

Murray said it's "more fun" to ride "pedal bikes" in the street and said he doesn't think of the risks of riding in traffic.

Jerrick said Murray is trying to be "a rebel" and the South Philly teen more "Pee Wee Herman than a Hell's Angel."

The co-host proceeded to ask Murray if he takes English classes in high school and if his mom was nearby while the interview was being conducted.

"Does she want to be on camera?" Jerrick asked. "She must be proud."

Murray responded that "no, she don't want to be on camera," which Jerrick said was a "double negative." He said it was a "shocker" when Murray told him his grades "weren't too good."

Video of the interview circulated social media Tuesday, where some came to Jerrick's defense, remarking that the group had no place on the highway, where it's illegal to bike.

Others called the FOX29 co-host behavior to the teen "unprofessional" and "degrading."

Neither FOX29 nor Murray immediately responded to requests for comment Tuesday afternoon.