A mixed bag for Maurice Edu in Bethlehem rehab appearance 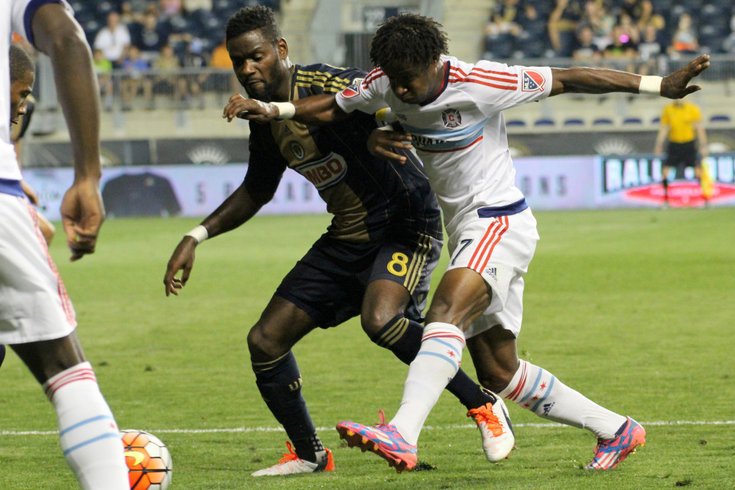 Union captain Maurice Edu has been on the shelf since September 30th of last season.

It's been 342 days since Maurice Edu last appeared for the Philadelphia Union.

The club captain has been on the shelf since September 30th of last year, due to a stress fracture that formed as a setback in the rehabilitation of sports hernia surgery.

Sunday's rehab start with Bethlehem Steel was Edu's first appearance at any level since the 2015 U.S. Open Cup final, a game he specifically prepared for pre-surgery. Edu missed seven of eight league matches leading up to the final and entered the game having played just 90 minutes in the five weeks prior.

He was shut down for the season after the penalty shootout loss.

Edu looked understandably rusty to start the game against the New York Red Bulls' second team. He was used as a defensive midfielder, a number six, playing alongside recent homegrown signing Derrick Jones.

Early in the game, he knocked out some of the cobwebs with this sequence, a battle for possession and wayward back pass that struck makeshift center back Bolu Akinyode.

If Edu hasn't played for nearly a year, it's been even longer since he played as a defensive midfielder.

He was used as a center back for the majority of 2015, and that's the spot where he played in the U.S. Open Cup final. Edu started last season in the midfield, but the disappointing performances of Steven Vitoria pulled the Union captain out of his preferred position and back into defense for the second straight year.

The experience at both positions makes Edu an excellent tackler, and he went to ground for the first time on this fourth minute play:

For the most part, Edu kept it simple and didn't try to do too much. Red Bull easily controlled possession and Bethlehem Steel couldn't create much going forward, so there weren't a ton of opportunities for Edu to attack.

In one of those rare forays forward, Edu starts the sequence with a good midfield tackle. Eric Ayuk loses the ball up top, Edu picks up possession, holds off two Red Bulls, and wins a dead ball opportunity in the opponent's half of the field.

One of the knocks on Edu as a number six is his positional discipline or lack thereof.

Edu is a naturally gifted athlete and a guy who could probably perform well at any spot on the field. Sometimes that results in a touch of wanderlust, with random forward ventures at the expense of the back four.

Most of his action in this game took place in combative midfield battles. Edu didn't shy away from any challenge and won a few fouls while also conceding a few.

Towards the end of his shift, he got caught in possession and gifted a sloppy turnover, then earned a yellow card after the play for an off-the-ball grab while recovering in transition.

By design, Edu came off after 32 minutes.

Is it too late for Edu?

I read fan forums and Facebook comments, and I notice some supporters wondering whether or not it even makes sense for Edu to play in 2016.

It's a legitimate concern. After all, the Union has stayed near the top of the Eastern Conference this season without any contribution from Edu. The coverage from Brian Carroll and Warren Creavalle has been sufficient, if unspectacular, at defensive mid. Does adding Edu to the midfield destabilize the shape?

This is a team that has competed all year long and will be competitive in the playoffs with or without Edu.

But the truth is this:  Maurice Edu still tops the Union depth chart at two different positions. A healthy Edu is the best center back and the best defensive midfielder on this squad.

Is Edu an improvement over Carroll and Creavalle? Would you rather have Josh Yaro, Ken Tribbett, or Maurice Edu at right center back? Those are the questions to ask yourself.

For all the talk of moving Mo back into the midfield, I still think he's a best-eleven caliber center back in Major League Soccer. This is a guy who has played CB for the United States' national team and represented the Union in the 2014 all-star game. The pedigree and the experience is there.

I also think he improves the squad at defensive midfield. I don't see why he can't come in and play the number six alongside Alejandro Bedoya. That's a pairing that would start for pretty much any team in North America. Add Tranquillo Barnetta, Chris Pontius, and Ilsinho, and that's one hell of a midfield.

For me, it's never been a question of ability. Edu has been jerked around for the majority of his Union career and consistently performed at a high level.

It's just a question of health. If he's 100 percent, I put him in the starting lineup as soon as possible.