Mixed outing for Okafor as lack of outside shooting dooms Sixers

In the Sixers’ opening game at the creatively titled “Utah Jazz Summer League,” Billy Lange’s group dropped a tight one to the summer version of the San Antonio Spurs, 74-71. It was easily the Spurs’ most important moment of the last few days, some rare good news for a franchise that consistently has been down on its luck.

From the Sixers’ perspective, the real story was 3rd overall pick Jahlil Okafor’s sort of debut in a Philly (or Phila, now) uniform, which was a bit of a mixed bag. Here is a look at his line:

Obviously, those 20 points did not come with the efficiency Okafor often had in college. Context is everything, though, and there are a couple of ways to look at the performance. Let’s start with the glass half-empty version: Okafor got his shot blocked a couple of times by the Spurs’ frontcourt and he missed all four of his shots from the line. Athleticism (although not as much on the offensive end of the floor) and making free throws are two areas that were considered question marks on Okafor’s scouting report. BUST!

Now let’s do the glass half-full part: Summer league is a vastly different game than the NBA, and the Spurs were allowed to be very physical with Okafor because the individual foul limit is ten in 40 minutes of play. Cady Lalanne, the man who he was matched up against primarily, picked up eight fouls in just over 26 minutes of play. You can’t play that way in a real game.

I mentioned Duke earlier, and it had to be quite a culture shock to go from the Blue Devils’ pristine floor spacing to whatever this is. Get used to it, big fella, at least for the short term: 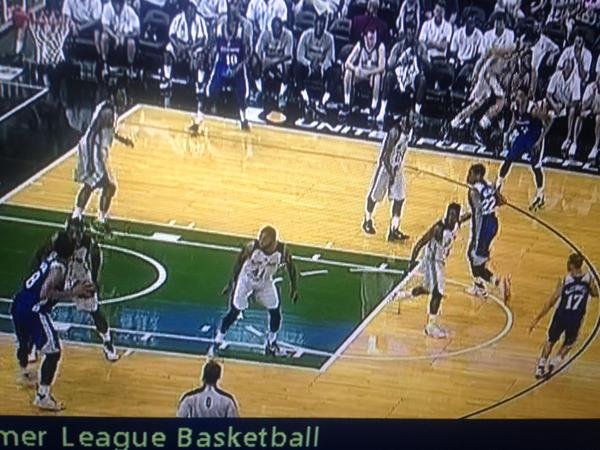 “We’ve been preparing him for everybody coming in and trying to make a name for themselves against him,” Lange said. “He wants to win, he wants to please, he’s a great kid, and his heart is so pure that he was probably pressing himself a little bit. But once he settled into the third quarter and we’re drawing plays up for him and getting him the ball in spots he probably hasn’t seen in a long time, I thought he did really, really well.”

My personal litmus test tends to be a bit more subjective: Does it look like you belong?

Yeah, it looks like he belongs just fine. We can talk about things like the impressive post passing, the decent defensive effort, and the lack of deep post position for hours. But there is another game tonight, and hopefully 82 more later this season that actually count, and then maybe even a few more after that in Jahlil Okafor’s career. There should be plenty of time to talk about him then.

•    Besides Okafor, one of the Sixers’ major bright spots was second rounder Richaun Holmes, who scored nine points on six shots, grabbed three boards, and collected a block. Similar to Grant, he can become a very interesting player if his three-point shot can go down consistently.

•    Jordan McRae scored 15 points and made some shots late, but this wasn’t as impressive as some of his outings in Vegas last year. Plus-minus can have a lot of noise, but his -11 feels fairly accurate after watching the game.

•    This is in part due to the poor shooting, but seven assists on 29 made field goals is no bueno. Besides T.J. McConnell and Okafor, nobody on the team was able to create for others.

•    Speaking of McConnell, the former Duquesne and Arizona point guard (who once upon a time gave Philly prep power Neumann-Goretti all they could handle in a state title game) needs to consistently make catch-and-shoot threes if he wants to stick. With Okafor also in the fold on both summer league teams, he’s going to have plenty of open shots.