The playoffs have been off and running for three days already, and, thankfully, two of the four games could lead to managers finally ditching ‘the book’ when it comes to deciding when to bring their best relievers into a game.

Even the bitterest of Phillies fans have to admit that Terry Francona (the last manager before Pete Mackanin this season to guide the team to a second straight 90-loss season) handled his ‘pen a lot better on Thursday than three-time Manager of the Year Buck Showalter did two nights earlier.

Francona’s shorthanded Cleveland Indians can go for a 2-0 series lead today, when they send former Cy Young award winner Corey Kluber to the mound against Boston (4:30 p.m., TBS). On the other half of the American League Division Series, former Phillie J.A. Happ will look to put this Toronto Blue Jays up 2-0, too (1 p.m., TBS) after his former rotation mate, Cole Hamels, was hit hard on Thursday afternoon.

We looked at the American League series yesterday. So let’s move onto the National League Division series, which both get underway tonight.

But it’s difficult to imagine it gets any better than Clayton Kershaw vs. Max Scherzer.

Kershaw is the best pitcher on the planet … at least until October, when Bumgarner owns that title. Kershaw’s career postseason numbers are mostly uninspiring (4.59 ERA in 13 games, 10 starts) but his postseason kryptonite, the St. Louis Cardinals, didn’t make the playoffs this year.

Still just 28 years old, Kershaw has plenty of time to bolster his postseason credentials and he pitched fine in last year’s LDS against the Mets. He’s simply too good of a pitcher not to own a postseason one of these years, and he’s sure looked like his dominant self after returning from the disabled list a month ago (1.29 ERA, 27 strikeouts, two walks in 28 innings over five starts).

Scherzer, with a 3.73 ERA in 12 postseason games (10 starts), also has the ability to carry a team all by himself in a postseason. And while you might think without looking that he has a better supporting staff behind him in his rotation, when compared to Kershaw, I’m not certain that’s the case: Washington has Tanner Roark but is without oft-injured Stephen Strasburg; Los Angeles has Rich Hill (1.83 ERA in six starts since joining the team) and durable and dependable rookie Kenta Maeda.

This is also a series when we’ll see multiple members of the 2008 World Champions Phillies begin a pursuit of their second World Series rings. The Dodgers (Chase Utley, Carlos Ruiz, Joe Blanton) outnumber the Nationals here (Jayson Werth), too.

Still, on paper, the Nationals should probably win. Bryce Harper is going to bust loose one of these Octobers and take his stardom to a new level and the Nats lineup is deeper than its Dodgers counterpart.

But Harper, the reigning NL MVP, had a mostly subpar regular season while battling a back injury. Current MVP candidate Daniel Murphy has been banged up recently.  And catcher Wilson Ramos is out for the rest of the season with a knee injury.

The Dodgers are my sleeper pick to win the World Series. So I think they’ll take care of business in D.C. this weekend before moving a step closer to their first World Series since 1988 when they finish off the Nats in Chavez Ravine early next week, without having to use Kershaw in a winner-takes-all Game 5.

This is obviously the year the Cubs end one of those droughts, right? The Cubs were world beaters in the regular season, winning 100 games for the first time since 1935. They averaged just under five runs per game (4.9) and have a rotation with a 2.96 ERA, led by the two pitchers in the NL that rank 1-2 in ERA (Kyle Hendricks and Jon Lester) and reigning NL Cy Young Award winner Jake Arrieta.

But wouldn’t it be cruel (a word apt for many a Cubs' postseason) if Chicago’s run at their first World Series title in 108 years is derailed by a team that’s won three titles in the last six years?

The Cubs and Giants met in the NLCS 27 years ago, with the Cubs holding home field advantage and sending a pitcher who is arguably the best in the sport’s history to the mound in Game 1. The Cubs got beat up in that game and lost the series, too. 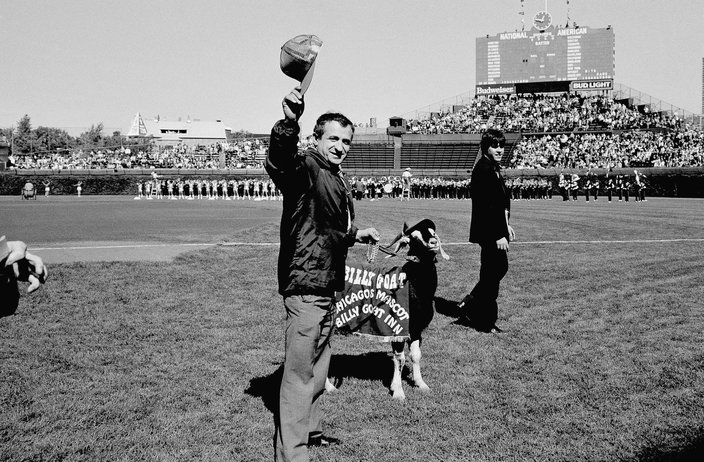 Sam Sianis, owner of the Billy Goat Tavern in Chicago, acknowledges the crowd along with his goat prior to a National League playoff game between the San Diego Padres and the Cubs in Chicago in 1984. Sianis and his pet goat, Murphy, were asked to leave a World Series game in 1945 because fans were bothered by Murphy's smell. The Cubs have not been back to the World Series since.

History might be the Cubs greatest opponent. But with a roster constructed by Theo Epstein, who overcame similar demons in Boston, Chicago has enough playoff-tested vets to complement their rich collection of youth, arguably the best in baseball, to thwart Bartman, the Billy Goat, and whoever else might be lurking in the famous Wrigley Field ivy.

If Madison Bumgarner is able to get on the mound twice in this series, I’d be leery of an upset. But I think the Cubs are just too talented to get knocked off in the first round.