There are only three days left to go before our long local nightmare is over. Or not. Friday’s 4 p.m. trade deadline is inching closer and closer, which means the clock is ticking on the Phillies’ last chance to trade both their top starting pitcher and closer before having to place them on waivers first.

The Toronto Blue Jays and Colorado Rockies kicked the deadline festivities off in earnest a little earlier than expected with Monday night’s surprising Troy Tulowitzki blockbuster. Here is a roundup of the reports and rumors concerning the Phillies from the past 24 hours. 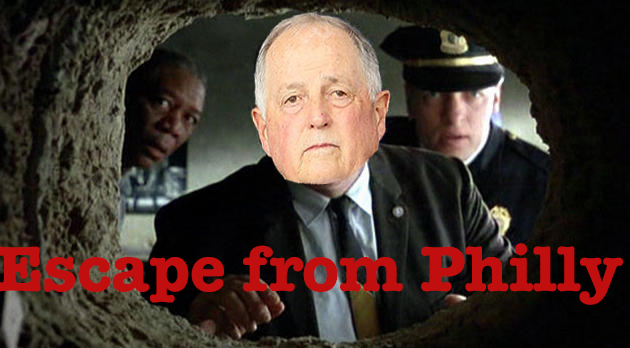 Monday: Texas in the lead
Tuesday: Papelbon to the Nats
Wednesday:
Thursday:
Friday:

Papelbon on the way out

Notice there isn’t a question mark at the end of the title. That is because CSN Philly’s Jim Salisbury is reporting Jonathan Papelbon will be out of Philly sooner rather than later. Here is the important part of Salisbury’s report:

“Papelbon will be traded,” a baseball source with knowledge of the situation told CSNPhilly.com on Tuesday.

The question is where? And when?

Papelbon’s $13 million contract option for next season (which becomes guaranteed when he finishes 14 more games) makes it likely he would clear waivers, which would make him eligible to be traded after Friday’s 4 p.m. non-waiver trade deadline. But signs point to Papelbon being traded before the deadline.

As to the question of where, Fox Sports’ Ken Rosenthal is reporting that the leader for Papelbon’s services is actually in the National League East. I’m sure he would get an extremely warm reception at Citizens Bank Park in September:

Sources: #Nationals making progress on acquiring Papelbon from #Phillies. Papelbon has said he will only approve deal if he can close.

There are still quite a few “hurdles” when it comes to trading Papelbon. The closer desperately wants out of Philly, but only on his own terms:

Sources: Papelbon or his agents talking to Nats about a potential trade. Issues to resolve: no-trade, being a closer and 2016 club option.

Nats/Phillies possible trade involving Papelbon still has lots of hurdles.Very complicated. Still may not happen. If it does Papelbon closes

LATE ADDITION: According to The Washington Post, the trade is getting close to the finish line.

Per ESPN’s Jayson Stark, the Phillies want all Cole Hamels suitors to push their chips into the center of the table by tomorrow. Here is exactly how the request was phrased in Stark’s piece:

The Philadelphia Phillies have told several teams interested in acquiring Cole Hamels that they'd like to get their "best" offers by Wednesday, sources told ESPN.com. The team would then make a decision about where -- and whether -- to trade him.

Stark also mentioned that the Houston Astros are making “a late push” for Cole Hamels, which backs up something that his colleague at ESPN Jerry Crasnick had previously tweeted out:

The #Astros remain in the thick of the Cole Hamels bidding, even after Kazmir trade. They're making big push, source says.

This doesn’t have anything to do with where Hamels gets traded, but it does make an impact on how the week unfolds: The 31-year-old ace is scheduled to start Thursday night at Citizens Bank Park. On a CSN Philly appearance, the New York Post’s Joel Sherman said the Phillies should move Hamels’ start back one day:

"... It's a risk not worth taking to put him on the mound one more time. He's clearly healthy. You don't throw the ball 94, 95 miles per hour as consistently as he did in his last start unless you are healthy. You don't no-hit a pretty good team in the Cubs unless you're healthy. And it just feels like there's no more auditioning needed."

According to MLB.com’s Todd Zolecki, the Phillies are thinking along the same lines:

Cole Hamels will NOT pitch Thursday as scheduled. He's scheduled for Friday, but that's after the deadline. Phils don't want to risk it.