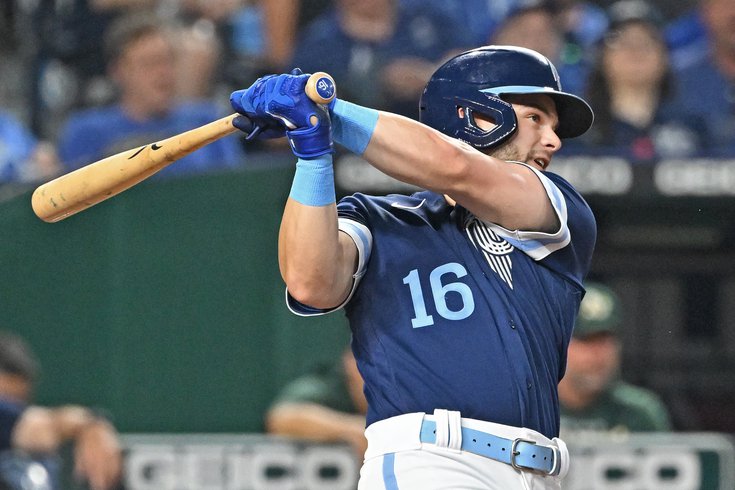 The dog days of summer are approaching and so are the trade rumors.

The Phillies are still after a postseason push, but with Bryce Harper expected to miss significant time due to a broken thumb, they are going to need help to do it.

Royals outfielder Andrew Benintendi could be an option, per MLB Network's Jon Morosi.

The 27-year old outfielder is putting up All-Star numbers with Kansas City, is in the final year of his contract, and has a connection to Dave Dombrowski as he was on the World Series-winning Red Sox team that the current Phillies president built in 2018.

Plus, with the Royals at the bottom of the AL Central, they'll be looking to collect for the future.

Andrew Benintendi is one name to watch if #Phillies trade for an outfielder, as I mentioned on @MLBNetwork a short time ago. He's on an expiring contract, is having an All-Star year with the #Royals and won a World Series title in Boston with current Phillies GM Dave Dombrowski.

Obviously, he's no replacement for Harper, who is the reigning NL MVP and was one of baseball's best hitters before a pitch hit his thumb over the weekend. But Benintendi would give manager Rob Thomson a reliable option in the lineup and the field. Considering the hole that has been in right due to Harper's previous UCL tear and the constant instability in center, player of Benintendi's caliber is needed in a big way.

The Royals are reportedly already exploring trade options for Benintendi and have until the August 2 trade deadline to make a deal.

The Phillies, at 39-36 and third in the NL East, have cooled off a bit after a hot start to June, but are three games back in the NL Wild Card hunt with a lot of baseball still to play.