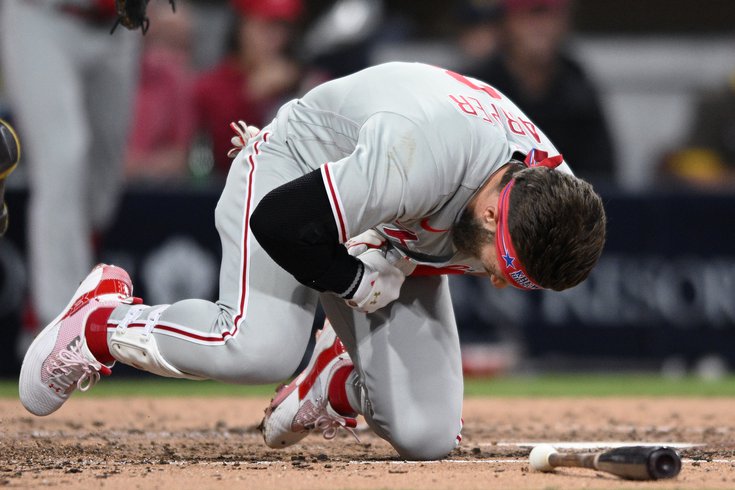 Bad news for Bryce Harper, the Phillies and their fans. According to a new report from the Inqurier's Scott Lauber, Harper is "expected to need surgery" on his fractured left thumb, an injury sustained after he was hit by a pitch from the Padres' Blake Snell on Saturday.

Here's what Lauber said regarding the reigning National League MVP:

How much time will Bryce Harper actually miss?

Harper is expected to need surgery on his fractured left thumb, multiple sources indicated, which would put his recovery time beyond the best-case scenario of four to six weeks. But even though only 14 weeks remain in the season, the reigning National League MVP is said to be hopeful of playing again this year, possibly even before the end of August.

If that timetable does come to fruition — team officials have thus far said only that he will be out “indefinitely” — the Phillies would need to at least tread water without their best player for a minimum of eight weeks. [Inquirer]

Obviously, the longer Harper remains out of the lineup, the odds of the Phillies ending their playoff drought get slimmer and slimmer. If it's a situation where Harper misses four to six weeks, as Lauber mentioned, the Phillies could potentially hang tough with some key acquisitions before the July 31 trade deadline. If Harper isn't back until right before Labor Day Weekend, that playoff drought is getting an extra year added to it.

The Phillies enter their first series post-Harper injury on Tuesday night, as they start a three-game home set against Atlanta.

Bryce Harper will require surgery to stabilize break. There is optimism he will play again this season after recovery of six weeks, give or take.