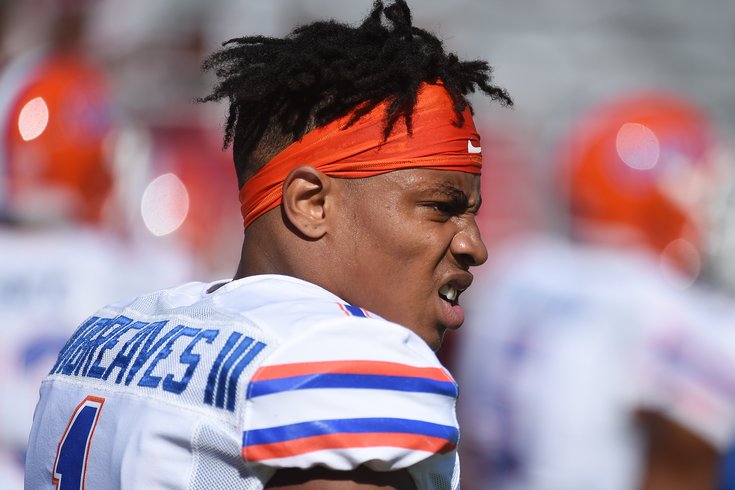 BOCA RATON, Fla. – Since the last time we aggregated mock drafts from national draft analysts, the Eagles moved up from 13th overall to eighth overall, opening up a whole new host of options for the Eagles to choose from. Let's see what players they're projecting to the Eagles.

General manager Howie Roseman made it clear he wanted to land inside the top 10, making it appear he had a specific player targeted at this spot. It could be Elliott, with DeMarco Murray gone and Ryan Mathews perhaps a step behind him. It also could be someone such as Florida CB Vernon Hargreaves III. Elliott could be an exceptional back, and like Todd Gurley a year ago, this isn’t exorbitantly high to take a running back.

Word is the Eagles are shopping Ryan Mathews, and they already traded DeMarco Murray. It would make sense for the team to look for a new bell-cow back.

The Eagles have been very active with trades, signing their own players, and attacking free agency. Elliott would be a solid piece to this offense, especially if they trade Ryan Matthews (sic).

The Eagles need to get more explosive in the backfield and Elliott would be a perfect fit.

Elliott gives the Eagles an instant bell-cow back and replacement for DeMarco Murray. He can take pressure off of Sam Bradford and the passing attack.

With DeMarco Murray now in Tennessee and Ryan Matthews also on the trade block, the Eagles are looking for a new identity at running back. Elliott has the talent to be the featured piece of Doug Pederson's offense.

Jimmy says: A week ago we published a long analytical piece saying that drafting Ezekiel Elliott with the eighth overall pick would be a bad use of resources, for the following reasons:

Also, while it would not surprise me if Ryan Mathews is traded, the Eagles do not appear to be actively shopping him as many of the analysts above are suggesting.

Hargreaves’ 2015 season did not match 2014, but it was far from bad or even average. The Eagles might value size and length at corner that Hargreaves does not offer. That is tough to know at this moment. But Hargreaves does offer athleticism (he’s more athletic than 97 percent of NFL CBs) and is an aggressive player.

It's a savvy move to get up in the draft by Howie Roseman here, especially with it helping him dump salary and replace Byron Maxwell's hefty deal with a cheaper, better option.

We had Miami taking Hargreaves here last week, and now that the Eagles have the pick we're sticking with the same player. Philly basically spent the first week of free agency undoing all of Chip Kelly's moves from last offseason. Byron Maxwell was arguably the biggest move that didn't work out, but now that he's gone, the Eagles still need a No. 1 corner. Hargreaves is the best available.

As much as the Eagles might wish it, simply trading away free-agent disappointment Byron Maxwell isn't likely to be a case of addition by subtraction. This remains a leaky secondary, and in a division with Dez Bryant and Odell Beckham, Jr, that won't work. Hargreaves is a three-time All-SEC pick with terrific agility, instincts, ball-skills and physicality as a tackler.

Jimmy says: Makes sense. The Eagles have Eric Rowe at one corner, and a logjam of marginal starter types who would be competing for the other starting job opposite Rowe. Hargreaves paired with Rowe would give the Eagles a pair of good, young corners for the foreseeable future.

With Jason Peters entering the twilight of his career, the Eagles could grab his successor at this point.

It’s easy enough to drop Elliott at this spot—the Eagles likely had someone in mind when they moved up as part of their recent trade with Miami, and Elliott is a top-five talent in this class. But Stanley also won’t slip far behind this. Philadelphia has to make plans for Jason Peters’s eventual departure, whether it comes this year or in the near future.

The Eagles traded up with Miami to get into the first eight picks, and it was worth the effort. Stanley has been a rock for the Fighting Irish, and I have seen most of the games because my son Austin played for the team. Stanley will be a 15-year cornerstone at tackle on an offensive line that needs help. You could argue the Eagles need more help inside, but Stanley is one of those key cornerstones you can’t pass on. He is not as athletic as Laremy Tunsil, but a player who will be better than 75 percent of NFL tackles by his second year. Stanley needs to get stronger against bull rushers, but he is quick off the ball and uses his long arms to his full advantage. He also has plenty of quickness to get to the second level and make plays in the screen game. On the negative side, Stanley can look a little awkward sometimes trying to recover when getting beat, but he is NFL-ready today. Eagles left tackle Jason Peters has been one of my favorite players for a long time, but his injury issues are starting to be a concern, and the Eagles are a different team without him. Stanley is not as athletic as Peters, but he has to be the pick here.

Jimmy says: I had Stanley as the Eagles' pick in my latest Eagles-only mock draft, but I'm beginning to question that. We'll have more on Stanley later this week.

Sam Bradford isn't the long-term answer. Chase Daniel isn't either. The word is they are eyeing a quarterback, which this move up helps. They can take a player who can learn for a year or so.

Jimmy says: If the Eagles really like Lynch, then sure, go get him. However, I think this pick made more sense when they were at 13 than where they moved to at eight.

This isn’t a fit many people are talking about, but it makes a lot of sense considering the Eagles sack leader last year was DL Fletcher Cox. Connor Barwin will be 30 this season and has a big cap hit next year, while Spence can offer an immediate impact on passing downs as a rookie. Myles Jack and Jason Spriggs will also get plenty of consideration here.

Jimmy says: This isn't a fit many people are talking about because it isn't one. The Eagles are loaded at DE with Brandon Graham, Vinny Curry, and Connor Barwin. Tight end aside, defensive end is probably the least of the Eagles' needs heading into the draft. While Spence is a really good player, it's not like he's some sort of Top 5 "can't pass this guy up" kind of talent where you'd take him over some of the other options likely to be available at 8. I can also say with certainty that Jason Spriggs will get zero consideration as the Eagles' pick here.