A modest proposal regarding cheesesteak tweets during the DNC 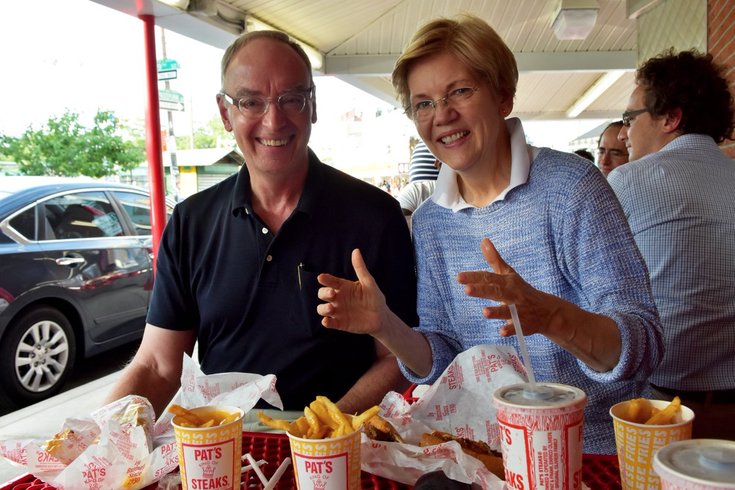 U.S. Sen. Elizabeth Warren posted a photograph of her outside Pat's King of Steaks upon arrival in Philadelphia for the Democratic National Convention.

Well, the big week is finally here. The Democrats have come to our bluest of blue cities, as have the eyes of the world and the voices of protesters.

I contemplated a couple of things over the weekend that I want to share before heading down into the maelstrom of DNC events both scheduled and, as of yet, unknown.

First arrived the thought of how Philadelphia will look in the wake of Republican presidential nominee Donald Trump’s dystopian view of America Vers. 2016. Specifically, whether images of protests will be co-opted as representative of a nation fraying at the seams.

This isn’t to say that thousands of people who came here to be heard shouldn’t exercise their First Amendment rights. They will and they should.

Here’s hoping they’re able to get their points heard in a fashion that doesn’t turn up in dramatically scored “look at these liberals and their callous disregard for the values that make America great again.” They will, but it shouldn’t, for airing grievances is part of what’s made American great all along.

The other thing I contemplated arrived when I saw a tweet from a sweater-sporting-in-sweltering-sun U.S. Sen. Elizabeth Warren, who went public with her traditionally rote first-stop photo-op. She said on Twitter that she went straight to Pat’s King of Steaks after landing at Philadelphia International Airport.

It’s an easy thing to do, shouting out one’s cheesesteak-chomping bona fides upon arrival in America’s birthplace. But then, I delved into the comments left upon said tweet, always a dicey proposition when reading responses to a politician’s #content.

Philadelphians should refrain from making suggestions on each and every cheesesteak tweet this week. My column: pic.twitter.com/cCvxDG8cdN

I meant what I wrote and I wrote what I read.

There will be hundreds if not trillions of cheesesteak-related tweets emanating from town this week. It will be as irksome as those cheesesteak-prep bumpers that make their way into every sporting broadcast hitting the airwaves from South Philly.

But if we’re truly going to be welcoming of our weeklong guests, lecturing them about their choice of cheesesteak eateries will become even more tiresome by Tuesday afternoon.

Cheesesteak-splaining could become a pox upon us all. Instead, let us embrace the wide spectrum of culinary tastes. As in the political world, we may not all agree on the issues, but part of what makes America great is a free market that affords us so many cheesesteak options.

I will close with one important caveat, though.

None of this applies to tweets from those who somehow made their way up to Roxborough and posted photos of themselves eating steaks from Dalessandro’s. Because those are the best cheesesteaks in town, no matter what a rigged poll said a couple months back.