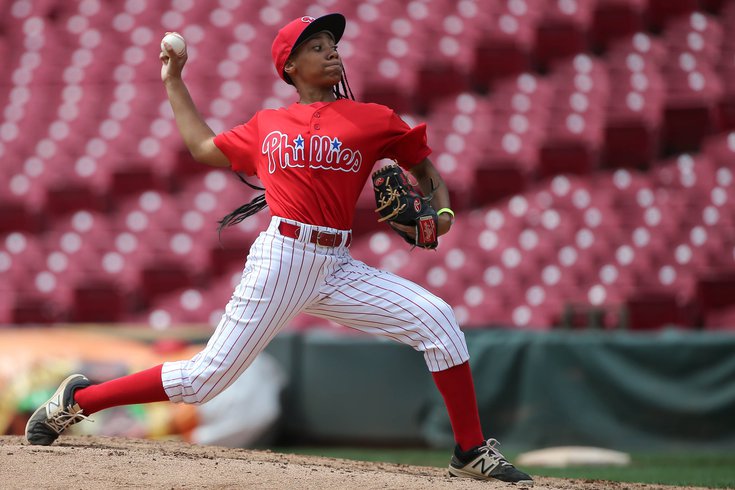 South Philly native Mo'ne Davis will return to the Little League World Series as a broadcast analyst for ESPN in 2021. Davis made history as the first girl to pitch a shutout and win a game at the annual tournament when she led the Taney Dragons to Williamsport in 2014.

Seven years after Mo'ne Davis took the Little League World Series by storm, the former phenom from South Philly is returning to Williamsport.

Davis will be in the broadcast booth for ESPN as an analyst during two KidsCast presentations, according to a report from the Associated Press. She'll call the MLB Little League Classic between the Los Angeles Angels and Cleveland Indians on Aug. 22, which you can watch on ESPN2, and one Little League World Series game at 7:30 p.m. Aug. 24 on ESPN.

Davis became a star when she led South Philly's Taney Dragons to the Little League World Series in 2014. She made history as the first girl to pitch a shutout and win a game at the tournament held annually in Williamsport. Her dominant run on the mound landed her on the cover of Time Magazine, and she was awarded the ESPY for Best Breakthrough Athlete in 2015.

Now, at 20 years old, Davis is hoping to become a household name as a broadcaster. A communications major at Hampton University in Virginia, she spent the summer as an intern calling games for the DC Grays, a college summer league baseball team in the nation's capital.

"I just love being around sports, and being able to talk about them from my standpoint is really cool," Davis told the Washington Post. "Especially sports that I’ve played, being able to see them from an outside perspective and relate them to people, it’s something I’d like to do in the future, something that I’m still working on."

Davis called a few games in Williamsport during the 2019 Little League World Series. This year, she'll be joined in the booth for the KidsCast by play-by-play announcer Ian Nichols, analyst Zoe Alter and reporter Hayley Galindo.

"I know the team has a lot of fun things planned for the broadcasts that will be of interest to kids and MLB fans of all ages," Davis told the Associated Press. "Since 2019 I’ve had some practice and feel more prepared than ever. I can’t wait to work with some new people and get back at it in Williamsport."

After her run with the Dragons, Davis played softball, basketball and soccer at Springside Chestnut Hill Academy. She plays infield for the Hampton Pirates.

After a one-year hiatus due to the COVID-19 pandemic, the 2021 Little League World Series begins Thursday. Tune in and cheer on Montgomery County's Upper Providence Little League, which is the first team to represent the Philly region since Davis toed the rubber seven years ago.