'Discovering the Impressionists' shows how one man helped them succeed 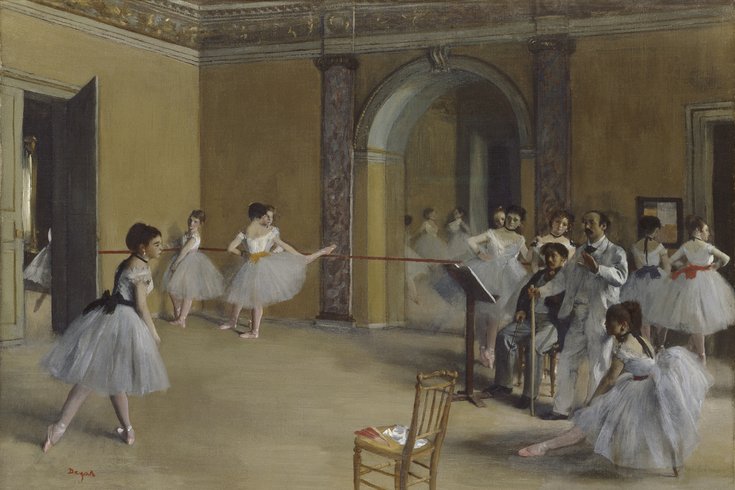 The Philadelphia Museum of Art/for PhillyVoice

The Dance Foyer at the Opera on the rue Le Peletier, 1872, by Hilaire-Germain-Edgar Degas (Musée d’Orsay, Paris: Bequest of Count Isaac de Camondo, 1911).

Though now the Impressionist painters of the late 19th century are beloved, their style was not fully embraced by the public or art collectors until years after the movement took hold. Claude Monet, Pierre-Auguste Renoir, Édouard Manet, Camille Pissarro and Edgar Degas, now favorites of even casual art lovers, struggled to make a living through their art. One man, Parisian art dealer Paul Durand-Ruel, was their champion.

Philadelphia Museum of Art's latest exhibit, "Discovering the Impressionists: Paul Durand-Ruel and the New Painting," examines Durand-Ruel's immense influence on keeping the Impressionist movement (and, as Monet joked, its artists) alive. Over 40 years, Durand-Ruel purchased around 12,000 pictures, including, roughly, 1,000 by Monet, 1,500 by Renoir, 400 by Degas, 800 by Pissarro and 200 by Manet.

"Discovering the Impressionists," which opens Wednesday, June 24, traces the development of Impressionism through all its ups and downs and delves into the role Durand-Ruel played. Using masterpieces by the artists above, plus historical photographs and documents, the exhibit will take guests on a journey through this milestone in art history.

Philadelphia Museum of Art, the National Gallery, London, and the Réunion des musées nationaux, Grand Palais in collaboration with the Musée d’Orsay, Paris, have collaborated to open this exhibit. Philadelphia will be its only venue in the U.S.

Discovering the Impressionists: Paul Durand-Ruel and the New Painting