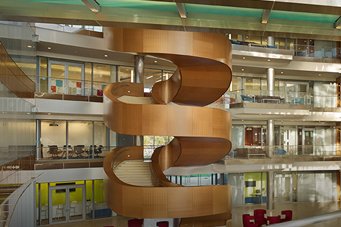 The Navy Yard Corporate Center in Philadelphia is one of the development projects of the Liberty Property Trust.

As the Philadelphia Business Journal reported, the Malvern-based real estate investment trust sold 41 office buildings and a 20-acre lot in the Montgomery County town for $245.3 million.

Workspace Property Trust bought the portfolio with the help of a $200 million loan from JPMorgan Chase Bank.

As one company decides to back out of the suburbs, another is taking its place. Workspace Property, formed as a partnership between several experienced players in the real estate scene, told the Business Journal that it wants to buy up "high quality, well-positioned suburban real estate assets throughout the Northeast." This is its first real estate deal.

Meanwhile, Liberty has sold $536 million of assets this year in an effort to pare down its portfolio to core projects. The $8 billion trust, known for projects like the Comcast Center and the Navy Yard, owns 104 million square feet of industrial and office space in the U.S. and U.K.

Though it has exited some suburban markets, that doesn't mean the trust has slowed down in other areas. In September, the company announced a massive, $1 billion development project on the Camden waterfront.

The properties in Horsham (see the full list here) took up 2.4 million square feet and were 84.3 percent leased.