Narrated by Ursula Rucker, OverTime encourages users to reflect on what sites and monuments mean to them 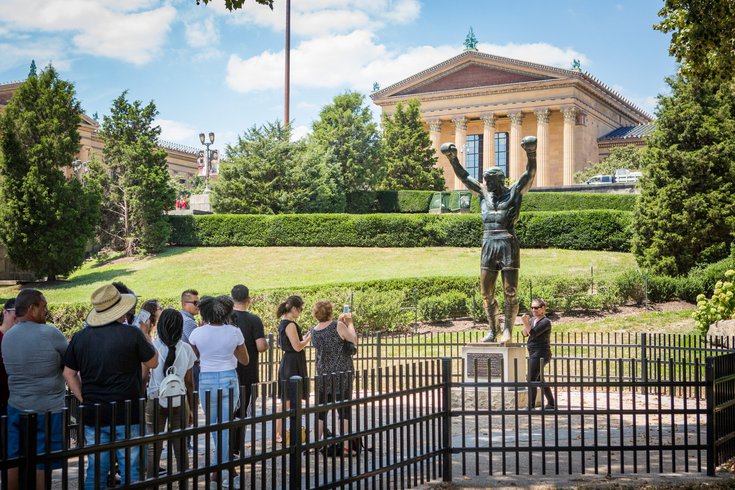 Monument Lab has created a new augmented reality app that allows user to tour portions of Philadelphia using their phones.

In OverTime, that backdrop is Philadelphia, where users currently can take a self-guided tour of the art museum area narrated by local poet Ursula Rucker.

To participate, users can head to the steps of the Philadelphia Museum of Art — where the tour begins. Scanning the ground with a phone prompts Rucker to appear on the app. User can select one of three tour options, including one that tells the story of the Rocky statue and other public memorials.

Users also can take the tours remotely from wherever they please — an option intended to include people who cannot access the area or wish to avoid crowds for public health reasons.

"Led by a virtual tour guide, the app opens an imagined outdoor art and history museum, so that users can access histories of an important street or intersection; explore stories and memories; and visualize new ways to access and share their own perspectives and knowledge of that site," Monument Lab posted on Instagram.

Throughout the tour, Rucker will ask participants questions, like "What has happened here?" and "What does this statue mean to you?" Users can submit their reflections through the app, adding to its interactive features. They will be accessible on Monument Lab's website.

The New York Times Style Magazine highlighted OverTime on Thursday in a list of new recommendations. The magazine praised the app, saying it allows users to engage in a discussion that gained traction during the Black Lives Matter protests last summer surrounding monuments, statues and other public art.

"Each route enables participants to explore the hidden narratives underfoot, like the fact that the museum's steps — and part of the building itself — were designed by the African-American architect Julian Abele in the early 20th century, or that before the arrival of William Penn in 1682, the land was inhabited by the Lenape, the Indigenous people of the area," the magazine wrote.

iPhones users can download OverTime at the Apple App Store. Android users will be able to download the app later this year.

OverTime was launched with support from Dream Syndicate, a Philly-based tech company that developed the augmented reality side of the app. It was created in collaboration with the Center for Public Art & Space at Penn's Weitzman School of Design and is sponsored by the Knight Foundation.