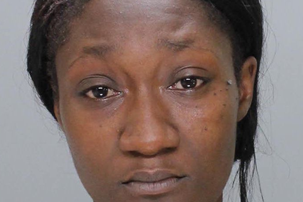 Cleaira Bell is facing criminal charges after police found her unattended toddler on the roof of her apartment building.

A 22-year-old woman and a 17-year-old girl are facing criminal charges after police rescued an unattended toddler from the roof of a three story home Monday in Northeast Philadelphia.
Police say they found also found a 1-year-old male attempting to climb out of a window when they responded to a call on the 4700 block of Leiper Street at 1:36 p.m.
Cleaira Bell, 22, and the 17-year-old allegedly left their children alone in their third-floor apartment.
Bell, the mother of the two-year-old male who found his way onto the roof, was arrested and charged with endangering the welfare of a child and recklessly endangering another person. The mother of the 1-year-old faces the same charges as a juvenile.
Police responded to the apartment after receiving a report of a toddler on the roof  Monday afternoon. The officers forcefully gained entry into the apartment and rescued the children.
The mothers of the children returned shortly after while police and fire personnel remained on location, police said.
The mother of the toddlers were transported to the Special Victims unit for further investigation. The children were taken to St. Christopher's Hospital for observation.