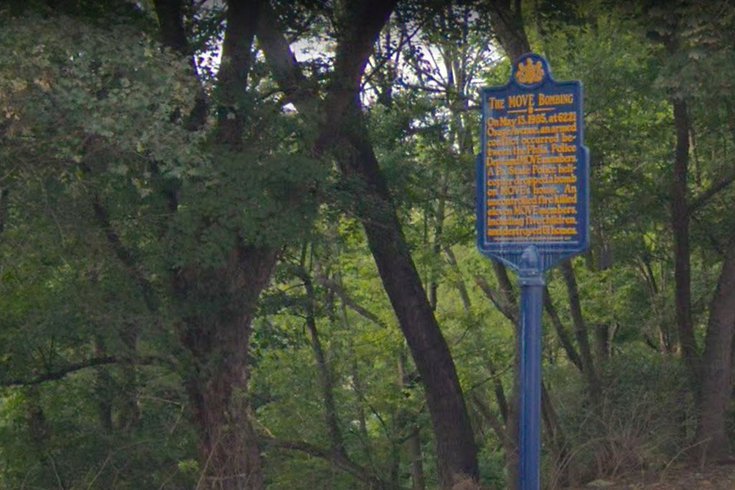 Hundreds of protestors calling for an end to police brutality gathered at the site of the MOVE Bombing in West Philadelphia Saturday, where Philadelphia police famously bombed the home of a black liberation organization and killed eleven people inside in 1985.

Hundreds of people gathered at the site of the 1985 MOVE Bombing in West Philadelphia on Saturday to protest police violence and racism following the killing of George Floyd.

Protestors gathered at noon in West Philly at Osage Avenue and Cobbs Creek Parkway, near where the MOVE Bombing occured. In 1985, the Philadelphia Police Department (PPD) famously bombed the home of a black liberation group, killing eleven people inside and destroying dozens of homes in the neighborhood.

Saturday marks the third consecutive week of daily demonstrations across Philadelphia after George Floyd, an unarmed Black man, was killed by Minneapolis police officers while being arrested on May 25.

The protest was called "Protest Philadelphia Police Terror," and was organized by several groups including the MOVE Organization itself, Black Lives Matter Philly, Philly for REAL Justice, and more.

Protestors spoke on the recent apology issued by former Mayor Wilson Goode, who was in office at the time of the event. Goode's written apology in early May said he regretted that the bombing happened. He called on Philadelphia officials to also issue a formal apology.

"Former Mayor Wilson Goode had a come-to-Jesus moment and decided to apologize for what happened here on Osage Avenue," a speaker at the protest said Saturday. "We repeat back 'apology without action is meaningless'."

Attendees chanted familiar phrases of the ongoing movement, including, "no good cops in a racist system,"  "Black lives matter," and "no justice, no peace, no racist police."

The historic MOVE bombing occurred after years of tension between MOVE and the PPD. The PPD had labeled MOVE a "terrorist organization," and charged nine of its members with third degree murder after a 1978 standoff resulted in the death of one police officer. All members of the MOVE 9 have since been released.

On the day of the bombing, another police standoff occurred, ultimately resulting in the decision to drop a bomb on 6221 Osage Avenue. Eleven men, women, and children who were inside died.

Once the bomb was dropped, police were then famously instructed to "let the fire burn," causing the damage to spread to other houses that were not involved in the conflict, but located nearby. More than 50 homes in the neighborhood were ultimately destroyed, leaving 250 people displaced.