A winter storm watch has been issued for the Philadelphia region 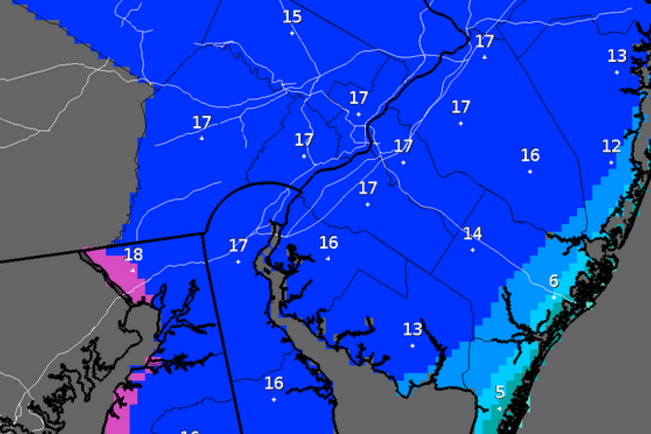 The National Weather Service released this snowfall prediction map for the Philadelphia and South Jersey regions for this weekend's storm.

A winter storm watch was issued Wednesday afternoon for Friday night through Sunday morning, and forecasters in the agency's Mount Holly office are predicting 12-16 inches of snow in the vicinity of the I-95 corridor. The northern suburbs of Philadelphia, central New Jersey and northern Delaware, will see less accumulation, between 8 and 12 inches. Accumulations of 2 to 4 inches are seen over southern Delaware, where a changeover to rain is anticipated.

The snow is expected to move in after the evening commute on Friday, then continue heavy at times through Sunday morning. Temperatures will be in the low 30s.

There is worst-case potential for an inch of snow on the ground by 8 a.m. Saturday.

The nor'easter will bring a swath of very heavy snow and strong winds from Virginia to New York.

But it's not yet clear where the storm will hit the hardest, said prediction center meteorologist Rich Otto on Wednesday.

"There's a lot of details that are yet to be seen," Otto said. "Subtle changes can make a big difference. We've seen that in storms in the past."

Snow amounts will depend, in part, on the extent of warmer ocean air changing snow to a mix or rain in some areas for periods of time. Any mixing or rain that does occur will return to snow as the system moves northeastward and cooling takes place on its west side, forecasters say.

On Wednesday, the weather service issued blizzard and winter storm watches for parts of Maryland, Washington, Virginia and West Virginia. The watches start as early as Thursday and stretch into Saturday.

Muriel Bowser, mayor of the District of Columbia, said Wednesday that the city was preparing for blizzard conditions and up to 2 feet of snow. The city has requested Humvees from the National Guard to reach isolated people and places if necessary.

"If this is a blizzard and we have sustained winds and people lose power, that would be my biggest concern," Bowser said at a news conference. "We can move the snow. We will move the snow." 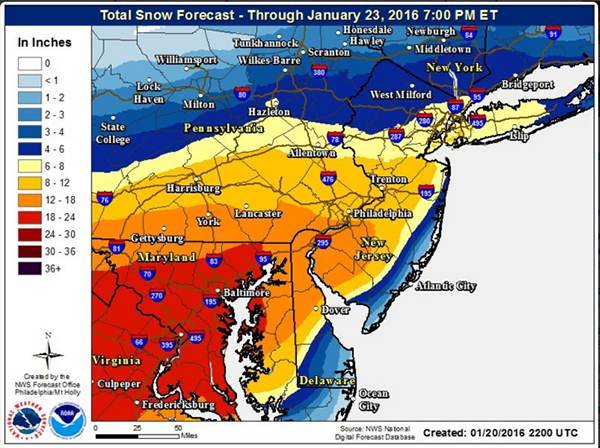 As yet, there is no such weekend storm, but energy sliding across the plains is expected to move eastward across Mississippi and Tennessee through late Friday, forecasters say. It will become a closed low as it moves to the East Coast into Saturday morning, driving cyclogenesis just off the Virginia-North Carolina coast, where rapid intensification should occur before tracking northeastward.

Some recent weather models are indicating the storm may trend southward (and result in less snow for points north of New York), but forecasters are not making any changes to the track for now.

The impact will be significant. While dry snow is likely at the start, it will become wetter snow possible, creating concern that it will stick to trees and power lines and cause electrical outages, the National Weather Service said. Strong winds, especially near the coast, may result in damage, though the extent will depend on severity and duration. That wind will result in considerable blowing and drifting if the snow is dry enough and many roads in the Philadelphia region will become impassable.

In the areas where blizzard conditions are possible, the weather service warns that travel will be limited if not impossible and the strongest winds and potentially life threatening conditions are expected Friday night through Saturday night.

One of the most significant effects of the storm will be felt at the Jersey Shore, with major coastal flooding on Saturday, as strong winds will combine with already higher-than-normal tides due to the full moon. With 60 mph gusts possible on the coast on Saturday, waves of 12-15 feet are possible on the beaches. Forecasters, however, said Wednesday it is possible that the strongest winds associated with the storm may not reach shore.

With temperatures expected to drop near 20 degrees Wednesday night, Camden County officials have announced a Code Blue Emergency from 6 p.m. Wednesday to 7 a.m. Thursday, which alerts municipalities with homeless populations, situational homeless or transient populations are expected to activate their response plan to accommodate their immediate needs.

So far this winter Philadelphia has recorded a half-inch of snow (it fell last weekend), which is about 6.5 inches below average for this point in the season. That appears likely to change by Sunday.

Here's the forecast through the weekend from the National Weather Service:

Snow, mainly after 1am. Low around 23. Northeast wind 6 to 11 mph increasing to 12 to 17 mph after midnight. Winds could gust as high as 32 mph. Chance of precipitation is 100%. New snow accumulation of 2 to 4 inches possible.

Snow could be heavy at times. High near 31. Blustery, with a northeast wind 20 to 22 mph, with gusts as high as 34 mph. Chance of precipitation is 100 percent. New snow accumulation of 7 to 11 inches possible.

Snow could be heavy at times. Low around 23. Blustery. Chance of precipitation is 90 percent.

A chance of snow before 11am. Partly sunny, with a high near 35. Chance of precipitation is 30 percent.

Partly cloudy, with a low around 18.