This dedication of the public artwork marks the start of Mural Arts Month, which runs through October 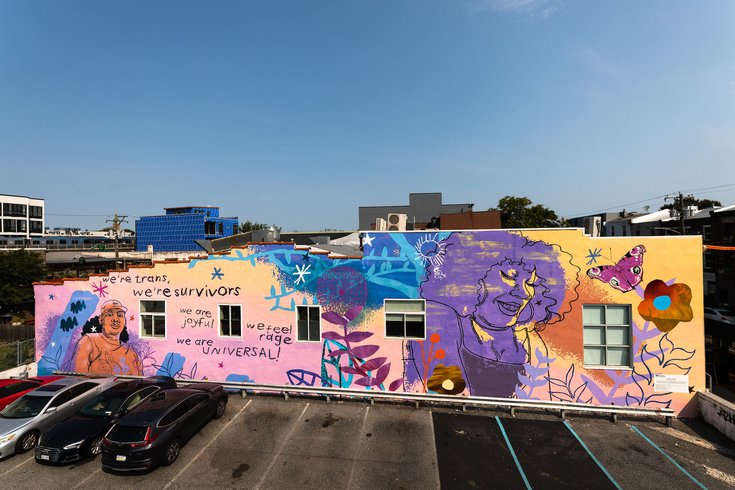 Mural Arts Philadelphia dedicated its first mural honoring the transgender community Tuesday. The 100-foot wide mural in Fishtown is the first of several new murals to be dedicated for Mural Arts Month.

The mural, "We Are Universal," was painted by Kah Yangni, and it is a project by Mural Arts' Porch Light program, a joint collaboration with the city's Department of Behavioral Health and Intellectual disAbility Services.

The mural runs along a 100-foot wide wall that is painted in a gradient of pink to yellow, covered with a collection of sketchbook-style designs and figures along with the words: "We're trans, we're survivors, we are joyful, we feel rage, we are universal."

The words painted on the wall originated from a workshop with residents at the Morris Home, which is the only residential recovery program in the country that offers services specifically for the trans- and gender-nonconforming community.

"It’s really exciting that, in the city that has thousands of murals, we get our first one," Yangniu told WHYY "I think that’s so cool."

Philadelphia's poet laureate Trapeta B. Mayson spoke at the mural's dedication, alongside organizers and leaders from Mural Arts Philadelphia and Yangni. "We Are Universal" is located at 1306 Frankford Ave. in Fishtown.

The dedication marks the start of a slate of activities for Mural Arts Month taking place in the coming weeks.

The theme for Mural Arts Month this year is "resilience," which is geared toward recognizing and celebrating the people and art that make Philadelphia the "Mural Capital of the World," the organization said in a press release.

Several murals dedications will occur in October, along with panel discussions, community events, film screenings and running and walking mural tours. For a full list of the Mural Arts Month events, head to the Mural Arts website.