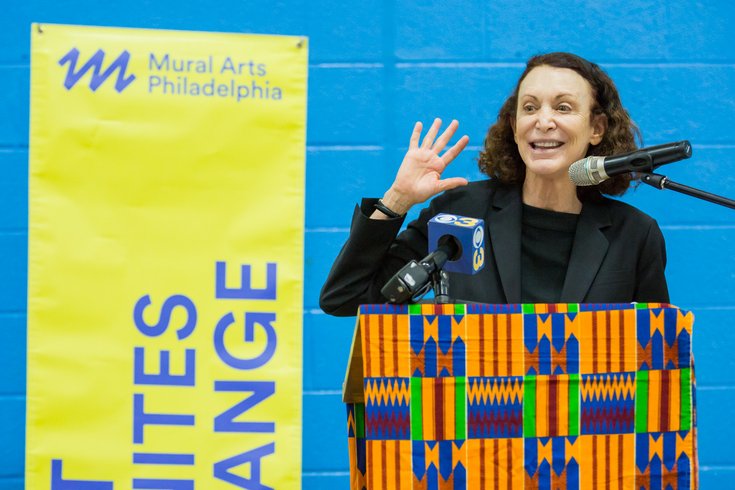 Philadelphia Mural Arts will soon expand its therapeutic prisoner training program with the aid of a $200,000 grant from the recently established Art for Justice Fund, an outgrowth of the Ford Foundation aimed at systemwide criminal justice reform.

The grant comes as part of $22 million in awards distributed to 30 organizations around the country. Mural Arts Philadelphia, the only visual arts organization selected, joins other programs across five areas of focus, from bail and sentencing reform to educational and employment access.

The local nonprofit's Restorative Justice program works year-round on public art projects in communities impacted by crime and incarceration. It also provides classes and a work release program, known as the Mural Arts Guild, for individuals on probation to build practical arts-based skills.

Philadelphia Mayor Jim Kenney announced the grant in a news conference Monday, outlining the goals the city will pursue with the additional funding.

Mural Arts has received one the inaugural grants from the Ford Foundation’s Art for Justice Fund. The grant will support our effort to reduce our prison population by 33% over 3 years. pic.twitter.com/5OIzuFIbjb

The following efforts will be prioritized in the year to come:

• The launch of a new major public art project in collaboration with Philadelphia’s MacArthur Foundation Safety and Justice Challenge, which will explore the causes and impact of an oversized county jail population on communities, public finance, and public safety

• Expansion of the Mural Arts Guild program to include one new cohort in 2018 (10 individuals), addressing the city’s priority to expand alternatives to incarceration for those who violate the terms of their probation

• A new fellowship program that provides opportunities and resources to up to five formerly incarcerated artists working around the country, inspired by Guild alumni who have gone on to become acclaimed professional artists, with priority given in 2018 to artists interested in issues aligned with the MacArthur Foundation Safety and Justice Challenge

• A collaborative partnership with the University of Pennsylvania’s School of Social Policy and Practice on an evaluation of Mural Arts’ model, in particular the Guild program, and a culminating symposium and exhibition in fall 2018 to share findings and resulting artworks

The Philadelphia Department of Prisons welcomed the grant and praised the longstanding relationship it shares with Mural Arts Philadelphia, which remains the largest public art program.

Proud to continue our long & successful relationship with @MuralArts it’s been a great benefit to all. Thanks to #FordFoundationArtforJustice grant, we continue our collaboration to train & service those who are returning to our communities. pic.twitter.com/ou1WnmKfkQ

Here's the full list of 2018 grantees for the Art for Justice Fund, whose mission is explained in the video below.