Ghösh, Soul Glo and Devil Master will open for the New Jersey group on select dates in August and September 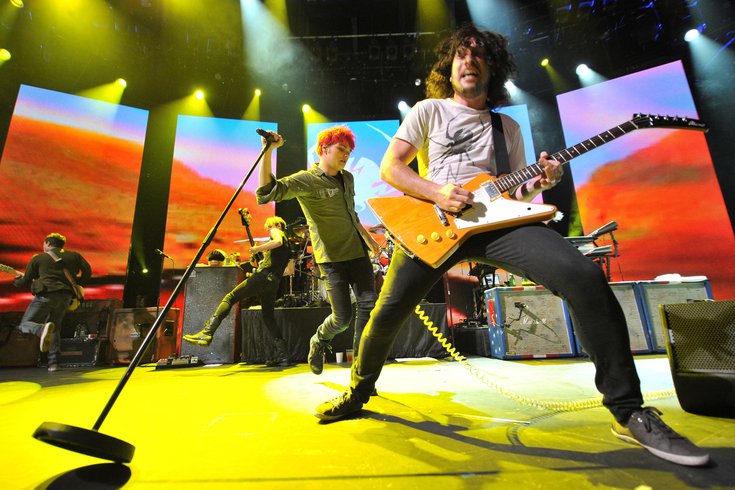 My Chemical Romance performs in London in 2011. Three Philly acts will join the band on their upcoming tour.

One of the most popular acts in the alternative rock genre will be bringing three Philadelphia bands on tour later this year.

My Chemical Romance is known for fusing melancholy pop-punk with operatic, arena-rock sensibilities and is considered one of the most quintessential emo bands, even though they've long tried to distance themselves from the genre.

The band got its start in the North Jersey punk scene in the early 2000s and found mainstream success with 2004's "Three Cheers for Sweet Revenge" and 2006's "The Black Parade," both of which have gone platinum three times over. The band started touring in Philly years before that in support of their 2002 debut album "I Brought You Bullets, You Brought Me Your Love."

In September 2003, the band opened for New Brunswick's Bouncing Souls at the Electric Factory. Nearly two decades later the roles will be reversed on My Chemical Romance's upcoming tour.

I saw My Chemical Romance open for @BouncingSoulsNJ at the Electric Factory in Philly in... 2003? Also opening was Strike Anywhere and The Casualties. What a weird weird show... https://t.co/fVSR45kO1n

Tickets for the tour go on sale on Friday at noon and will start at $130 for the band's Aug. 29 show at the Wells Fargo Center. My Chemical Romance will also be one of the headliners at thee Firefly Festival in Dover, Delaware, on Sept. 23, where the cheapest price for admission will be $300.

When the band reunited in 2019 after a six-year-hiatus, tickets for the reunion tour sold out in just six hours and were being scalped for up to $1,000. But the tour was ultimately canceled due to the COVID-19 pandemic.

Soul Glo is a popular and critically-acclaimed fixture in the Philly hardcore scene. The band's EP "Songs to Yeet at the Sun," was included on Pitchfork's list of the best albums of 2020. The band is defined by its experimental edge, which brings influences from genres like rap and shoegaze to their abrasive, fast-paced take on hardcore.

Lyrically, Soul Glo's frontman, Pierce Jordan, seeks to promote social equity, particularly regarding the issue of race, and draws influence from his experience as a Black man in the U.S.

Soul Glo is at the forefront of a new crop of bands led by people of color in the punk scene.

The band recently signed to Epitaph Records, one of the largest and most commercially successful independent punk labels, and will release their new album "Diaspora Problems" on March 25. A music video for the lead single, "Jump!! (Or Get Jumped!!!)((by the future))," debuted on YouTube earlier this year.

Soul Glo will be joining My Chemical Romance at their show in Raleigh, North Carolina on August, 28.


But not every act My Chemical Romance is bringing on tour is a rock band in the traditional sense.

Ghösh bills itself as "digital hardcore" on their Bandcamp. They bring together electronic elements to the traditional punk rock sound.

On their latest release, "Alien Nation," the duo's frontwoman, named Symphony – another Black bandleader – raps over the compositions of Zachary Devereux Fairbrother, which vacillate between hyperpop, hard rock and more ethereal electronic interludes.

Symphony and Fairbrother met in 2018 while working at a pizza shop in Philly.

Ghösh will join the Bouncing Souls at the headliner's Aug. 27 show on Long Island.

Devil Master will bring an extreme metal edge to the My Chemical Romance tour.

They just released a new single, "Acid Black Metal," ahead of their album "Ecstasies of Never-Ending Night," which comes out April 29 on Relapse Records, a prominent metal label based out of Upper Darby.

The song was deemed one of the best new tracks of the week by Metal Injection, and the music video has garnered over 15,000 views in two days.

Devil Master will be playing three shows with My Chemical Romance. First at the Wells Fargo Center on Aug. 29, and then again in Dallas and Houston on Sept. 28 and 29.