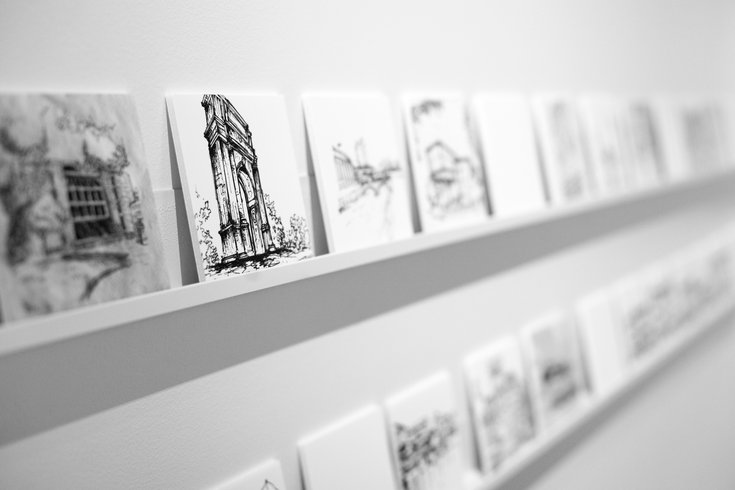 A collection of napkin-drawn sketches at the Center / Architecture + Design. The exhibit showcases Philadelphia through the lens of designers, architects and Philly fanatics across the country who submitted illustrations.

Though many of Philadelphia's buildings tower over us with seemingly effortless grandeur, the simple truth is that each one started with a less perfect sketch. Recognizing that, the Center / Architecture + Design's latest exhibit spotlights not just the sketch itself, but its usual canvas: the napkin.

"There’s this funny thing in the architecture industry where a napkin sketch is sort of lingo to talk about a concept sketch of something. And a lot of times, you’ll hear stories that someone is out to dinner with a client and wants to express an idea, so they just grab a napkin and sketch," Jared Edgar McKnight, co-chair of the Philadelphia Emerging Architects Committee and curator for the exhibit, told PhillyVoice. "So, [our napkin exhibit] is something very tied into the architecture and design industry; it's very tongue-in-cheek, and that’s what we like about it."

The exhibit, located at the Center / Architecture + Design at 1218 Arch St., was organized in collaboration with Center City design firm J2 for the American Institute of Architects Convention, which runs May 19-21. For the project, the organizing committee accepted submissions of Philadelphia-themed 5-by-5-inch napkin sketches from approximately 70 people across the country. Those were submitted digitally and printed onto foamcore boards, with the remaining 50 spaces on the wall of the exhibit reserved for sketches drawn on napkins during the convention. (Napkins and a pen will be situated next to a box at the exhibit.) New submissions will be placed on the wall as the convention goes on. 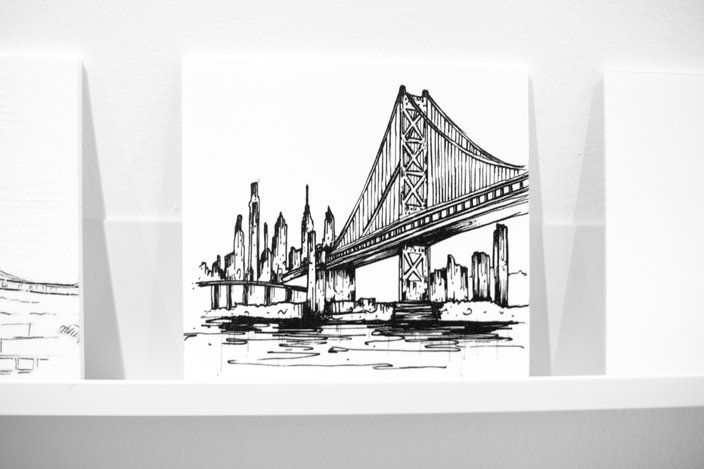 Many artists opted for recognizable buildings and structures in the city, ranging from City Hall to the Fairmount Park Welcome Center at LOVE Park, though others were more modest with their subject choices — sights that only a local or former resident of the city would recognize. Consider it part of the fun of the exhibit, as the pieces are intentionally left untitled in the context of the exhibit. 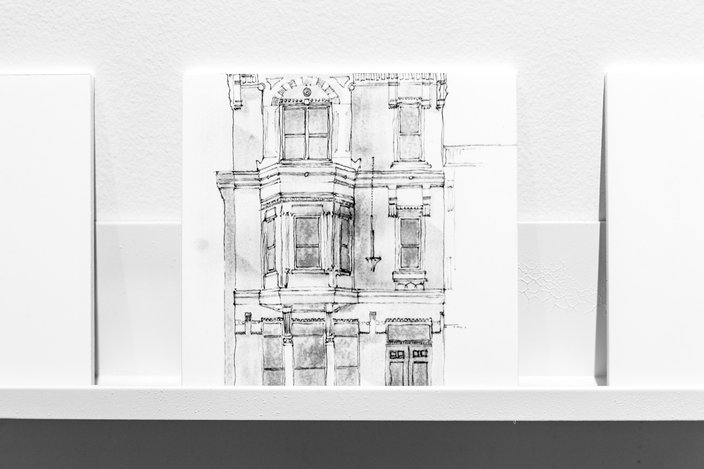 “Some are a little abstract, and some are very clear representations of something — there are a lot of the Art Museum, of the Ben Franklin Bridge, but then there's a wide range of smaller projects I wasn’t even aware of, but that means something to the artist who drew them," McKnight said. "I think that’s the coolest part about it: We definitely got a lot of the sort of ‘iconic’ Philadelphia monuments, but then also some smaller ones that people would normally maybe not even notice.”

In the past, the napkin exhibit has existed as a local competition among emerging architects. However, because the AIA Convention was scheduled for Philadelphia this year, raking thousands of architecture and design professionals into the city, the thought was to transform the exhibit into a showcase of Philadelphia. 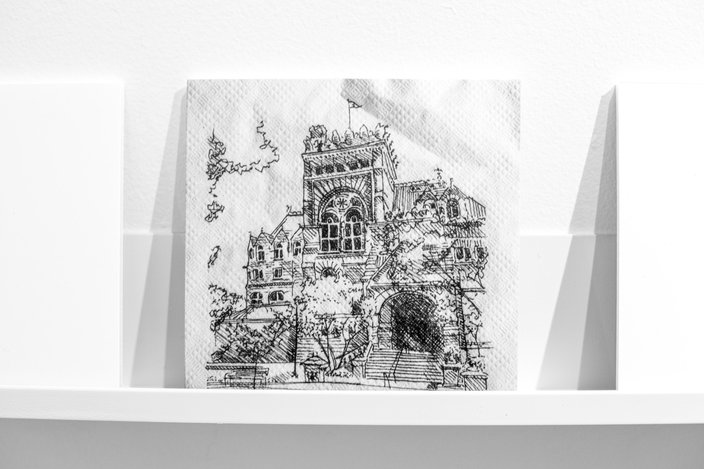 Standouts include a bold-lined illustration of the Benjamin Franklin Bridge, a detailed portrayal of the Anne & Jerome Fisher Fine Arts Library, a scrawl of a school building near Fitler Square submitted by a 9-year-old and a series of sketches that portray Elfreth's Alley in Old City. Each sketch was drawn with blue or black ink by artists, designers and just about anyone with a knack for sketching and an affinity for Philly.

The exhibit was timed for the AIA Convention, though you'll find the exhibit at the center for weeks to come, leading up to a full unveiling of the newly renovated Center / Architecture + Design in June. The center is open Monday through Saturday, 10 a.m. to 6 p.m., and Sundays from noon to 5 p.m.