Natalie Egenolf: The last time the Phillies made the playoffs... 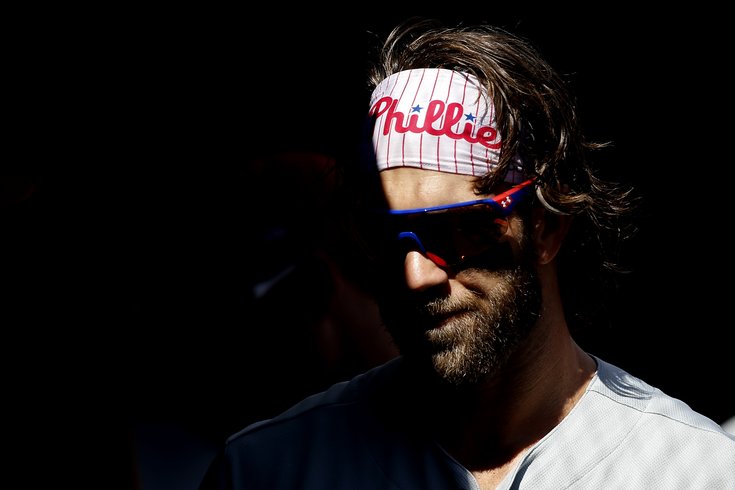 Bryce Harper's first season in Philly did not come close to fulfilling the hype.

It’s official. After losing to the Nationals, the Phillies have been eliminated from playoff contention for the eighth straight year.

The future seemed so bright in February yet, here we are again. In 2011 the Phillies finished first in the NL East and touted “The Four Aces” — Roy Halladay, Cliff Lee, Cole Hamels and Roy Oswalt (typing this sentence is making me depressed). A lot has changed since 2011 so let’s take a trip down memory lane to remember what life was like the last time the Phillies made the playoffs, shall we?

No one in Philadelphia knew the names Carson Wentz, Joel Embiid, Ben Simmons or Carter Hart

• Carson Wentz was in his senior year at Century High in Bismarck where he graduated as valedictorian (smart cookie) in 2011. He then attended North Dakota State that fall where he redshirted his first year.

• Joel Embiid had just picked up a basketball for the first time, his first team was Basketball Without Borders.

TB to when I started playing basketball 3 years ago and right before I came to the US, I WAS SO SKINNY #chickenwings pic.twitter.com/qW7zTn7yzQ

• Ben Simmons was 14 years old and playing basketball for Box Hill Senior Secondary College at the 2011 Australian Schools championship. He made his first appearance in the US a year later and was chosen to represent Australia at the 2012 FIBA Under 17 World Championship.

• Carter Hart was just 13 years old and a few years shy from his debut in the juniors in 2014 for the Seattle Thunderbirds.

In 2011, the current Philadelphia sports starts were just a bunch of teenagers at the beginning of their careers.

Speaking of our teams…..

• The Sixers were pre-processing. Current GM Elton Brand was still playing next to Andrew Iguodala, Thad Young, Spencer Hawes, Jrue Holiday, Evan Turner and Lou Williams (just to name a few blasts from the past). Andre Iguodala made his first All Star game that year and it was the last season the Sixers made the playoffs until the guys mentioned above made it happen in 2018.

• The Flyers were trying to bounce back from a 2010 Stanley Cup Final loss to the Blackhawks and made it to the second round of the playoffs only to lose to the Devils. That summer, Paul Holmgren shocked the world and traded captain Mike Richards to the Kings for Brayden Schenn and Wayne Simmons and also moved Jeff Carter to the Blue Jackets. Holmgren added Ilya Bryzgalov to the team for nine years at $51 million. While Bryz ended up being a bust, he was wildly entertaining. I have to say, the Flyers have never been the same since this time. Sad.

Instagram and Snap Chat were still in their infancy so there’s probably a good chance you were posting pics from your iPhone4 or uploading them from your digital camera to show your friends how your weekend was. Creative captions and comments were appreciated for the good candids.

Yes, it was the year 2011 when Osama Bin Laden was finally killed in Operation Neptune Spear at his bunker in Pakistan. Word spread quickly around the world, to the Phillies Mets game where fans chanted “USA! USA! USA!” after learning about the demise of America’s most wanted murderer.

Tebowing was all the rage

(So was planking, which I’m still not really sure what the point of was.)

People were so inspired by Tebow kneeling in the end zone with his fist on his head after his miraculous stint with Denver, it swept the internet.

We all were in our feels when Adele’s 21 Album dropped and was the #1 album in 2011 but it was really Carly Rae Jepsen’s ear worm “Call Me Maybe” that unexpectedly (and annoyingly) took over. Kids and adults alike were scouring for something to get it out of their brain. I apologize if this paragraph is bringing the song back.

Hopefully, whatever the Phillies decide to do this offseason, it will fix the myriad of issues we’ve witnessed over this season (ahem, we want a pitcher not a belly itcher). In typical Philly fashion, I’m going to believe next year is our year and we do not have to go through another season pining for the feelings of that 2011 run that is now so far away.