Nationally televised Harden-Embiid duel lives up to the hype

It doesn’t always happen this way, but the first two possessions of Friday night’s matchup between the Sixers and Houston Rockets foreshadowed how the game was going to unfold over the next 47 minutes.

After the Sixers won the tip, Joel Embiid immediately ran a pick-and-pop with T.J. McConnell, caught the ball at the top of the key, dribbled to the left, took a couple of extra-long type strides, and dunked on Nene about as hard as humanly possible.

“You’re not going to see a more jaw-dropping play in the league, really,” Brett Brown said. “That is jaw-dropping, for a 7-foot-2 man to pull it going to his weak hand and finish like he did.”

In that moment, perhaps the only person in the building who wasn’t awestruck by Embiid’s breathtaking play was James Harden. Never in a rush, he called for a pick-and-roll, got to his favored left hand, calmly worked down the lane, drew Embiid over and simultaneously delivered a pass to an open Nene for an easy layup:

The back and forth had been laid out, Embiid trying to harness his unheard-of combination of size and skill against Harden’s total control on the offensive end of the floor. And in the end, the latter’s wizardry prevailed as the Rockets got a 123-118 road win.

And even though Houston walked out of South Philly with a win, Embiid had earned plenty of respect from the visiting locker room.

While it might not have been apparent that Harden would finish with a seemingly impossible line of 51 points, 13 assists, and 13 rebounds on that first play, you could see that the Sixers defensive strategy was going to allow The Beard to go for a big number.

The Rockets came into the game shooting an astounding 39.7 threes per game, and they had made 37 percent of them. Pretty, pretty good. So instead of allowing Harden to pick them apart and find open shots for Patrick Beverley, Ryan Anderson, and Trevor Ariza, the Sixers chose to stick to those guys.

That put Embiid and Nerlens Noel on an island against Harden, which, um, isn’t fun: 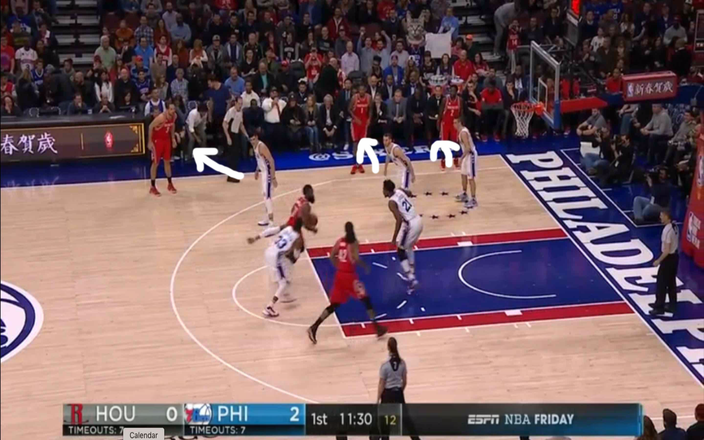 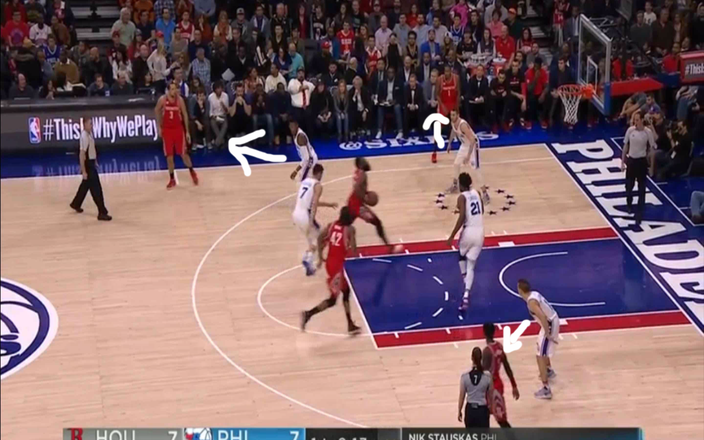 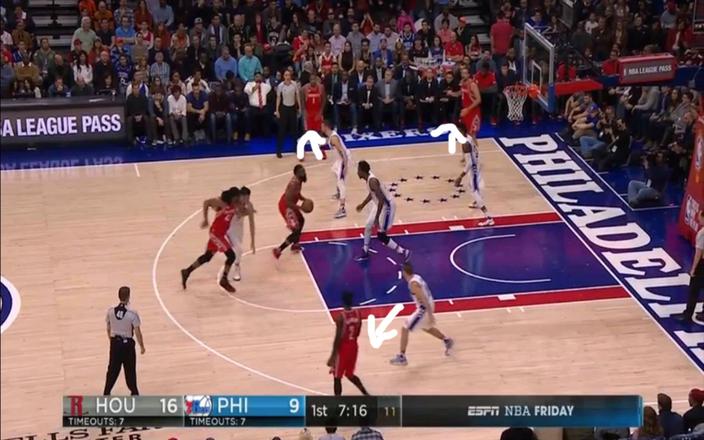 As you can see, those other three defenders are staying attached. This was very much the plan, but there was a downside.

“You have to pick your poison,” Brown said. “What sword are we going to fall on? If we’re going to die, what is it going to look like? And you saw it.”

“The way Coach D’Antoni had them set up, you give them a three or they’re going to get a pocket pass on the pick-and-roll,” Embiid said. “So, they just know how to play, so you've got to give them a lot of credit, especially coach and James.”

The scheme is only part of the reason that Harden carved up the Sixers defense. They also switched a ton with players not named Embiid, and Harden just obliterated mismatches in isolation (Poor Dario Saric was the victim of that lethal step-back jumper time and again). The Rockets also punished the Sixers off turnovers and any other sort of broken play.

And yet, they were only able to win by five.

A major reason for that is Embiid wasn’t too shabby himself (32 points, 7 rebounds, 4 assists, 3 steals, and 2 blocks). His top-of-the-key three-pointer was on target, but he also found buckets in all sorts of ways. On one highlight-reel sequence, he blocked a Harden dunk attempt in transition, dribbled coast-to-coast, and scored on Nene to the delight of what was a raucous crowd:

Whenever the Rockets seemed to get up double digits, the Sixers were able to answer back with a run of their own. Embiid was often in the middle of that.

“In general, we all walk away thinking he can be whatever he wants to be,” Brown said.

To make the performance even more impressive, Embiid wasn’t at 100 percent. The third-year rookie said his knee felt a little sore after the game, which he was told him usually takes three weeks to heal. Of course, it had only been one week since Embiid had tweaked that knee in the win over Portland.

(Embiid won’t travel with the team to Chicago for Sunday’s game for what the team is describing as rest. They play back in Philly on Monday night, which would line up with his usual back-to-back workload.)

Embiid makes no secret about how much he relishes the opportunity to play on national television, and the Sixers dropped to 0-4 in those games. Compared to the last two times, stinkers against Minnesota and the Lakers, he was fairly upbeat in the locker room afterward.

“I’m not mad,” he said. “I think we could have done a better job, especially me, but I feel better than previous times.”

Embiid knew what he had just played in. This was a very exciting game in which the MVP frontrunner outdueled a player that very much has an MVP talent level. The biggest winners of the night had to be ESPN, who flexed out Bulls-Heat for this game.