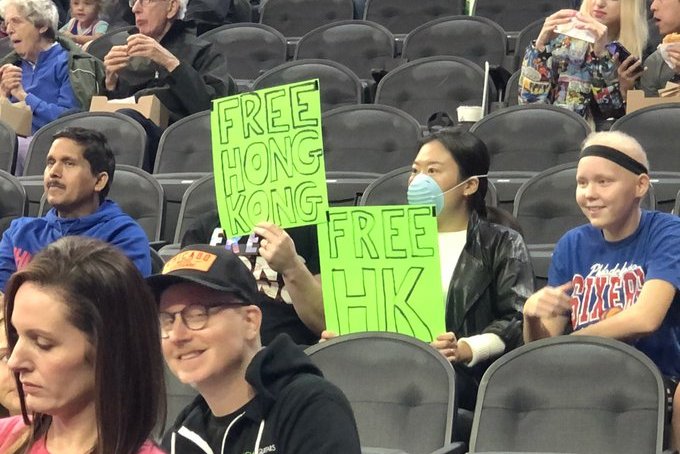 Wells Fargo Center officials said Wednesday that the two Philadelphia 76ers fans who displayed the signs during Tuesday's preseason game with messages supporting pro-democracy demonstrators in Hong Kong were ejected from the arena for "disrupting the live event experience."

The Sixers were playing an exhibition game against the Guangzhou Loong-Lions, a team from the Chinese Basketball Association, at the time.

Sam Wachs, of Chestnut Hill, and his wife held up neon green signs during the second quarter of Tuesday night's game that read "Free Hong Kong" and "Free HK."  Wachs also was wearing a shirt with "Free Hong Kong" printed on it.

The couple had been sitting near the Chinese team's bench, Wachs told NBC10. Security confiscated their signs and instructed them to leave the arena. As Wachs walked out, he yelled "Free Hong Kong."

Wachs and his wife were warned three times about the signs before being escorted out, a joint statement from the 76ers and Wells Fargo Center issued Wednesday afternoon said.

The Sixers said they received "multiple complaints from guests" about Wachs and his wife and that the couple had "verbal confrontations with others in attendance." The couple left  arena "without incident," according to the Wells Fargo Center statement.

Wells Fargo Center has rules about fans displaying signs in the arena during events. This policy affects the size and the materials of which fans' signs can be made. It also states signs should be in "good taste and appropriate for the event" and the arena's policy is "subject to change based on the Well Fargo Center management's discretion."

PhillyVoice is attempting to reach Wachs and his wife for comment but has not heard back yet.

Wachs tweeted photos of the signs Tuesday night, saying "Here are the controversial signs. I know, earth shattering right? Obvious why the NBA would have a problem with this."

Here are the controversial signs. I know, earth shattering right? Obvious why the NBA would have a problem with this. Thanks to @Christie_Ileto for sending me this photo: pic.twitter.com/Y1GydtGked

He also retweeted video of him and his wife being escorted from the Wells Fargo Center, recorded by 6ABC's Christie Illeto.

Hey @NBA @sixers - you are letting greed get the better of you. It matters who you do business with. Stand up to China. https://t.co/zeMmHR7wJ6 https://t.co/LeO0LwV7nn

Pro-democracy protests have been taking place in Hong Kong since June, instigated by proposed law that would have allowed the extradition of people suspected of crimes to Mainland China. As many as 2 million people have participated in some of the demonstrations, which began peacefully but have escalated to violent clashes between police and protestors.

Hong Kong holds some autonomy, which was granted after the former British Colony returned to China in 1997, and protestors feared the bill would subject people of Hong Kong to China's "deeply flawed justice system" and further erode the city's judicial independence, according to the BBC. The bill has been officially withdrawn and protests have since grown to support full democracy.

The New York Times has published an in-depth timeline of what has happened in Hong Kong to date.

The NBA became a part of this politically charged issue when Houston Rockets GM Daryl Morey shared a tweet in support of freedom for Hong Kong last week. Morey tweeted Friday, "Fight for Freedom. Stand with Hong Kong." The tweet has since been deleted.

In the aftermath, China has revoked sponsorships, said it will blackout Houston Rockets games set to air on the NBA's digital rights holder in China and canceled pre-season games scheduled between Chinese teams and NBA G-League teams.

On Monday, the NBA released a neutral statement, supporting Morey's freedom of expression, but noting that his tweet does not represent the league.