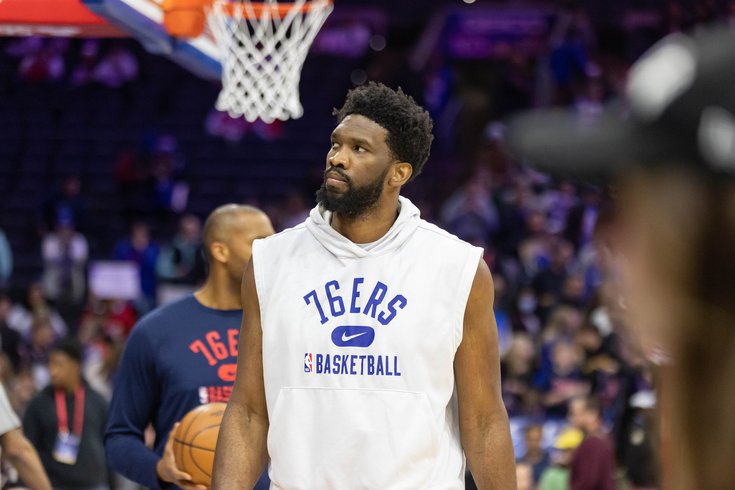 Joel Embiid stands on the court before the start of the Sixers' game against the Raptors at the Wells Fargo Center on March 20.

Nobody in Philadelphia wants to hear this, but Joel Embiid isn’t winning the MVP.

It’s not because the world hates him, nor is it because he plays in Philadelphia. This isn’t a personal vendetta that you think voters have against Embiid because you heard a soccer song regurgitated by Jason Kelce — at one of the best moments in our sports history.

The level of respect that the NBA and people who make up the league have for Embiid shouldn’t be reduced to “the world hates us” because he happens to play in an era with two other dominant forces. He’s a victim of circumstance, not of anything else.

It’s an important award for Embiid to validate his journey so far and therefore it’s important to some fans. I understand that willing of a connection despite it being a distant third for me.

I’m rooting for Joel Embiid to win a championship, be First Team All-NBA and if he wins an MVP in the process, so be it. He will be selected along with the other top four players as a First-Teamer this year, which is an amazing accomplishment seen in and around the league.

It’s not a sexy conversation for local radio shows nor whatever consists of an even worse landscape in “Sixers Twitter,” but being selected as one of the five best players – with expectations of years to come – is one hell of a feat.

Nikola Jokic most likely wins the award because he didn’t have a combination of Khris Middleton and Jrue Holiday, nor did he get mid-season help with James Harden. This isn’t about what Embiid, Jokic and Giannis Antetokounmpo do on a random night against a team 30 games below the .500 mark. It’s about where the team is, where they are going and, most importantly who else is around the MVP candidate.

After speaking to voters on multiple platforms, even off the record, the general consensus is this is one of the most difficult votes in a long time, but ultimately someone has to win. Nobody that I spoke to on a radio or digital show mentioned anything about slighting Embiid or how he needed to really do anything more.

That’s the reality of the league right now. It’s something that any true fan of the NBA would love. The star power is overflowing and it’s not an easy task to sit atop one’s peers. What happens next year? Jokic may get some help back, but Giannis isn’t going anywhere. What happens if Luka Doncic shows up in shape? Remember Ja Morant?

This isn’t going away and it’s only getting harder for Embiid – or anyone – to win this award. This should have been Embiid’s year based on what we saw and were told in prior years. He needed to play more games, be available and ultimately not be a long-term injury concern. Check. He did all of that in a year where it never even mattered. That’s what’s so tragic about him not winning the award, but there’s always a lining – even if it’s more of a bronze.

Whatever the hell it was that motivated this man worked. He’s blossomed into one of the most dominant players we have ever seen. If it was the MVP race or Charles Barkley, it worked. There are small tinkering improvements that can be made to his game, but Embiid has arrived as a top-five player and reliable force every night.

So, what happened? It’s not his availability. It’s not the world hating Philadelphia. It’s not some misguided attempt to steer people away from a history of MVPs in our city. It’s not even his diet anymore. Why won’t Embiid win the MVP?

Kurt Helin – an MVP voter and in charge of all things basketball at NBC Sports – told me this about Embiid and the award:

“I really feel bad for Joel because this would-could have been his year. He’s been good enough, but this is the toughest decision I’ve had. Triple-Double [Russell] Westbrook vs. Harden was easier and cleaner than this one. I have a feeling Philly fans are going to be shockingly disappointed with where the voting goes and it’s not fair. Most years he would win it with what he has done. This is an insane year. It’s less the last two weeks and more the fact that Harden got there; help came and the team hasn’t been better and he hasn’t necessarily been better. It feels like Jokic just had to carry more of a load. Giannis has always been Giannis.”

Helin speaks for a lot of people watching this team and the rest of the league where it’s not about anything negative nor even what more Embiid could have done. It’s about what didn’t happen with Harden arriving and really hasn’t since he’s played more games with the team. Again, it’s not saying that Harden has been bad. It's not even saying the team has been bad, but nothing got significantly better, from the optics to the floor.

Whether Jokic and the Nuggets would be increasingly better with Harden or not is moot, as he’s done it again without his top-two allies on the floor. Don’t let people who don’t watch Jokic or Giannis, or really any other team outside of who the Sixers play, reduce this race to “handoffs” or some social issue. The league is stacked right now and it’s increasingly difficult to stand atop the NBA.

One more note from Helin:

“I will add I get it from Embiid’s perspective. It’s important and very personal for him. It stings, and I get that, but for voters, it’s not personal. He was very, very good in a year other players were also very, very good. I do feel bad for him.”

The best ointment for that sting is winning the NBA Championship. It doesn’t even have to be this year. If the past few season have motivated Embiid, then imagine what we see next season. Or the year after that if Morant or Doncic or Giannis wins it.

We can simultaneously feel sorry for Embiid on a personal level without reducing it to some conspiracy theory about why he didn’t win the award.

If you’re looking for any other reason outside of that, maybe it’s ordering a steak well-done.