NBA trade rumors: Timberwolves 'badly' want Ben Simmons, but what can they offer Sixers in return? 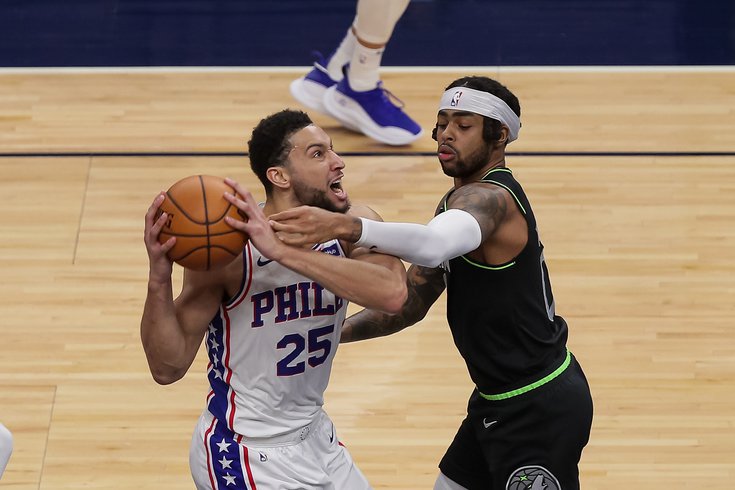 Sixers fans seem willing to line up to help get Ben Simmons out of town, and that's understandable given the way the season ended for Philly with a Game 7 loss to the Hawks after blowing multiple double-digit leads throughout the series — including a 26-point second-half lead in a pivotal Game 5.

Simmons' poor free throw shooting, his lack of aggression and assertiveness in the second halves of games and his ultimate defining moment of the series, when he failed to take a wide open dunk late in Game 7 and instead passed to Matisse Thybulle (who was in considerably worse position), all played a role in his team's early postseason exit.

Needless to say, countless stories have been written about the Sixers needing to move on from Simmons, why that's so and what they could possibly get in return. Far fewer people seem to be talking about how the Sixers can rehab not only their All-Star guard's game — both on the court and between his ears — but also his image, all of which are going to be major considerations for any team looking to acquire the 24-year-old Australian.

Despite all of that, there still seems to be plenty of teams interested in acquiring Simmons, although we don't yet know how much any of them would be willing to give up — or if any of those teams would have the types of assets to begin with that would make a Simmons trade worthwhile for Daryl Morey and the Sixers.

Teams like the Blazers (Damian Lillard or CJ McCollum) and Wizards (Bradley Beal) could offer sizable returns, but would also likely force the Sixers to throw in some sweeteners along with Simmons, something Morey might not be willing to do if he believes they'll turn into promising NBA players. For example, we saw in the postseason part of the reason why Morey was reportedly hesitant to include Tyrese Maxey along with Simmons in any potential James Harden trades earlier this year.

But what about some of the other teams out there? The Warriors have already been linked to Simmons as a guy they could pair with Steph Curry and a returning Klay Thompson next year. There are also teams who are looking to bring in a guy like Simmons to be "the guy." And before every Sixers fan rolls their eyes and sarcastically says, "Good luck," it's worth remember how young Simmons is, what he brings on the defensive end of the floor and, more importantly, that there are likely still a number of GMs who not only value those skills, but believe that in the right situation, they can get a lot more out of Simmons than the Sixers were able to get.

Right or wrong, that likely means that Morey will have more than a few rival GMs ringing him up in the coming weeks and months with offers to potentially take Simmons off his hands. The latest such team to present itself is the Timberwolves, who reportedly want Simmons "badly."

Here's more from Darren Wolfson of SKOR North in Minnesota:

How badly do the #Timberwolves want to trade for Ben Simmons?

"I texted with someone that knows Ben Simmons incredibly well, that has working knowledge of all things NBA. My text the other day — because I know the 'Wolves are fans of Ben Simmons — but my text was, 'How badly do the Wolves want to trade for Ben Simmons?' This individual sent me a text, it was one word: 'Badly.' Make no mistake, the Wolves have trade interest in Ben Simmons."

So, what could the 'Wolves offer Philly?

For starters, D'Angelo Russell would work straight up because of the money. He's only a year older than Simmons and has two years left on a four-year, $117 million deal. While he'd be a significant downgrade on the defensive end, he would likely be a much better offensive fit — not to mention that he's a much more prolific scorer than Simmons, averaging 19 points per game while shooting 39% from three.

Karl-Anthony Towns, one of Minnesota's other stars, is essentially a non-starter given that he wouldn't fit alongside Embiid and you're not bringing him in here to be a bench player. While KAT is clearer a better player, we all saw how the Al Horford experiment worked out. On top of that, they're likely not looking to move on from him in the first place.

Then there's a pair of other young guards the Timberwolves could offer, but will likely shy away from dealing given their age and affordable salaries: 2020 first-overall pick Anthony Edwards, who is just 19, and 24-year-old Malik Beasley. Obviously the Sixers would prefer the younger, cheaper Edwards to a guy like Russell, but it's doubtful that Minnesota would be willing to move on from him so quickly, not to mention that they'd still need to include some other pieces in there to get the salaries to match.

In other words, it seems like unless the Sixers are willing deal Simmons for Russell, perhaps bringing in a third team and making it a three-way deal would make more sense, not unlike the conclusion we reached regarding the Warriors' reported interest.

That's part of what's going to make it so difficult for the Sixers to deal Simmons — or at least for them to do so and get something back that will satisfy the fanbase. With Simmons making so much money, the only players who would make sense in a straight-up deal would be, 1) players who make a lot of money but deserve it, meaning their teams aren't likely to give them up, or 2) players who are overpaid, meaning the Sixers should try to stay away from them altogether. Russell at least appears to be somewhere in between these two options, a guy whose money works and isn't grossly overpaid, but at the same time a guy who wouldn't really excite the fans the way a Lillard or Beal would, even if those are pipe dreams at the moment.

That might mean that the best path to moving Simmons involves a deal including pairing him with one of their promising young players like Maxey or Thybulle. That should at least help the Sixers inch closer to option No. 1. So, how badly do you want Simmons out of town, Sixers fans?