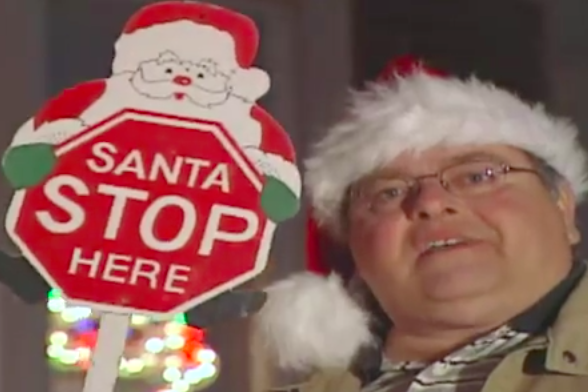 Frank Olivo in an ESPN piece that focused on his infamous Santa Clause incident.

As the Eagles prepare to face the Oakland Raiders on Christmas night, the organization is hoping to close a historical wound that grew so infected it has created a monster.

Have you ever heard about the time Eagles fans threw snowballs at Santa Claus? What a bunch of jerk stores! Any group of people willing to do that would obviously tarnish the reputation of the place where it happened and leave a deserved legacy of guilt by association available for future reference.

Tired jokes aside, that fateful day in December 1968 has stuck with Philadelphia fans for nearly a half-century at this point. Frank Olivo, the unfortunate Santa who took a pelting, passed away in May 2015. This is how he'll be best remembered, somewhat to his dismay, for reasons that warrant some critical attention.

On Friday, as fans across the Philadelphia area unwind for the long holiday weekend, the Eagles released a video in which Santa Claus and a snowball attempt a reconciliation.

As you can see, this is a rift that likely won't go anywhere anytime soon. Also, Santa seems kind of unstable here. The snowball should have just rolled out on him.

This is becoming a genre. Last year, ESPN's "30 for 30" series did a Christmas spoof on the snowball fiasco. Santa went on to become a down-and-out alcoholic in that one.

After 50 years, maybe, just maybe, this will all be something to laugh about instead of using it to criticize the character of Philadelphia.