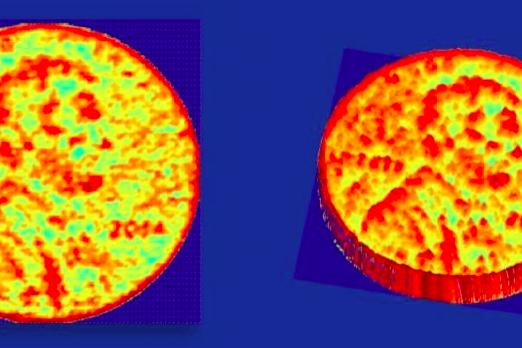 California Institute of Technology /for PhillyVoice

A 3-D scan of a penny produced using a new camera chip developed by Caltech engineers.

Engineers at the California Institute of Technology have developed a silicon chip that might be able to turn the camera on your smartphone into an extremely precise 3-D scanner, PCworld reports.
The device, which has immediate appeal in the 3-D printing industry, works using LIDAR (light detection and ranging) laser beam scanners to shine light directly on a given three-dimensional object. Detectors on the scanner pick up subtle differences in the light reflected back by the object, measuring the phase, frequency and intensity of the incoming light to create a 3-D image.
The Caltech researchers demonstrated this capability using their camera chip to produce a 3-D image of a penny from half a meter away, rendering micron-level resolution. With further development, the camera's 16-pixel array could be scaled up significantly to capture distance imaging that will help driverless cars avoid obstacles, for example.

The chips could be incorporated into phones and the data could be sent to 3D printers to duplicate scanned objects, eliminating the need to use large desktop devices.

Wider use of 3-D images to improve visualization and sharpen structural understanding is taking root in a variety of disciplines as new technologies become available. In medicine, radiology is advancing with the help of a company called Echopixel, whose software takes the 2-D images produced by magnetic resonance imaging (MRI) and computerized tomography (CT) and reconfigures them into interactive 3-D representations that doctors can analyze wearing 3-D glasses.
What may come as a surprise among all of these 3-D innovations is that in many cases, they will promise greater cost control in the industries they enhance. In the case of the camera chip 3-D scanner, the silicon chip in the proof of concept was cheap and less than 1 millimeter square.

“The small size and high quality of this new chip-based imager will result in significant cost reductions, which will enable thousands of new uses for such systems by incorporating them into personal devices such as smartphones,” said Caltech electrical engineering professor Ali Hajimiri.

That probably explains why they went with a penny for the demo.