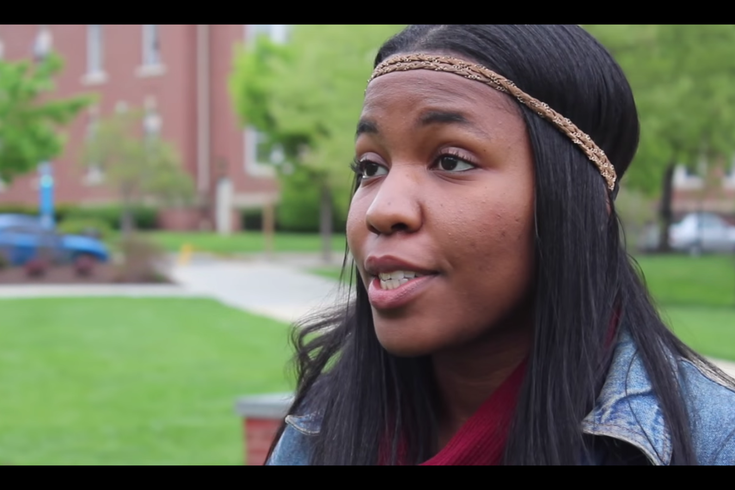 A student discusses why she chose to attend an historically black college in "Remixing Colorblind."

Rider professor Dr. Sheena Howard is well known in the academic world and beyond for her writing, her teaching, her public speaking and for being the first black woman to win an Eisner Award (the Oscars for the comic book set). One thing she's not known for? Filmmaking.

Well, not yet, anyway.

Despite having exactly zero experience in the film industry, Howard knew that her latest project would work best in the medium. And thus, just about a year ago, she embarked on creating "Remixing Colorblind," a 30-minute documentary which examines how higher education shapes our notions of race. If the advanced sell-out of the doc's premiere at The Ritz at the Bourse on Feb. 25 is any indication, Howard may be headed to the actual Oscars one day.

You'd never know from the slick trailer, though, that Howard, with some help from friends and Rider students along the way, created the film basically in her home. Or that, when a working relationship with a film editor didn't go to plan, Howard and some friends taught themselves Final Cut Pro X to edit the entire doc and trailer on their own.

Thanks to that sense of authorship, Howard's vision for the film is unfettered. This is fitting because, though "Remixing Colorblind" doesn't focus on Howard's own story, it was inspired by her experiences studying at different universities.

"I went to a predominantly black school for my Ph.D. at Howard University, but most of my education has been at predominantly white schools with the exception of the high school I went to," Howard said, "so I had different experiences at all of those institutions which I realized really shaped how I understood myself and my own perceptions of race."

This drove her to dive deep into the connection between race relations and higher education, speaking to faculty members, administrators and students at high schools, historically black colleges and universities (HBCUs) and predominantly white institutions. In the film's trailer alone, students discuss everything from the confines of selecting a race on a college application to why they should've factored diversity into their choice of school and racism they've felt on campus.

Though Howard began making the film before this fall's student protests at schools like University of Missouri, her work on "Remixing Colorblind" and the reaction to those protests taught her something important."This documentary really showed me how we always miss the mark when we talk about race," Howard said. "We’re never having the right conversations to actually get to the heart of some of the practices that we can change so that people of color are not feeling racial injustice."

Thus her mission for "Remixing Colorblind" is to explain to administrators the effects of higher education on its students' perceptions of race and motivate them to make real change in their institutions. One thing Howard suggests institutions do is to take a hard look at their core curricula to ensure it is designed to help students talk about race.

"A lot of our high school students are coming from very segregated experiences, especially in places like New Jersey and Philadelphia where students are going to high schools that are all white, all black, all Hispanic and then they’re coming onto a college campus where they might feel more diversity and they’re bringing all that baggage with them," she said. "They’re bringing all their negative associations around race, their prejudices, with them. But then at the college level, they’re not getting any sort of classroom education that’s allowing them to inform their notions of race. That’s something very simple that we can do."

Though Howard calls a second suggestion more "radical," it's based on a college tradition many know and love: study abroad. She suggests offering students at predominantly white schools the chance to spend a semester at an HBCU.

"Give them that option. A historically black college is going to give you a totally different perspective on race. You’re going to see black professors, you’re going to see black students majoring in science, technology, engineering and math," she said, "and the stigma goes away. You can’t say all these black students at, say, Howard University got in there because of affirmative action."

Howard will be taking these, and other ways universities can create truly diverse campuses -- like balancing a scale in which 79 percent of college faculty in the U.S. are white - on the road with "Remixing Colorblind." Though screenings past Thursday's premiere aren't scheduled just yet, she intends to take the film to the festival circuit and tour it at colleges and universities, paired with Q&A sessions and speaking engagements. She's also planning an online element to help higher education administrators.

"I want ... individuals [who] run universities to make sure that they pay attention to the tangible but also nontangible things on a college campus that reinforce notions of superiority and inferiority. Things like even the textbooks that we use. Most of the things that we’re reading are from white men. Diversify the writers in the work that you have. The first time that a student learns about black feminism shouldn’t be in a black feminism class. It should be in a class on feminism. The first time a student has an African-American instructor shouldn’t be in an African-American History class," she said.

"All of those things reinforce our notions of value. It reinforces our notions of what people can and cannot do, should and should not be. So I want institutions to be proactive in being prepared for the shifting demographics of students of color that are enrolling in college."

Of course, as with any film, there was plenty more content that hit the cutting room floor of Howard's first documentary. For instance, she said, addressing class and economics is something she wishes could've made the final cut. But, for now, she's looking into creating an extended version and is hoping "Remixing Colorblind" will put her in touch with others in the film industry for the future.

Plus, she's already starting on her next project -- but you won't get any details out of her just yet. All she'll say for now it's something "in the realm of comics."