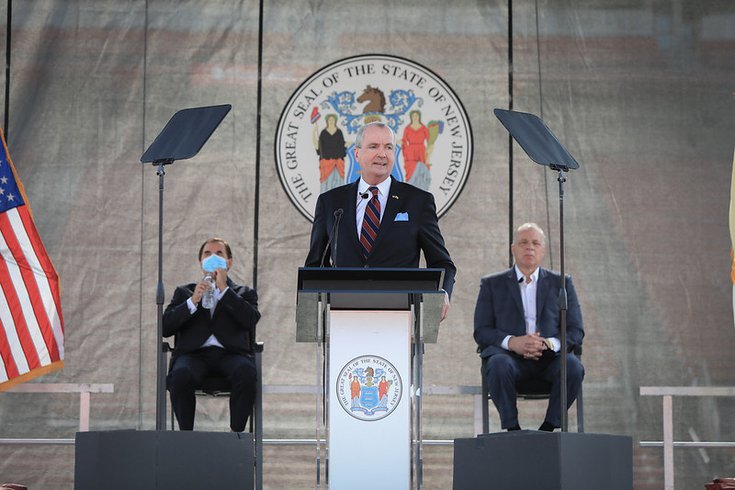 The $32.4 billion spending plan would fund the state government from October through June. New Jersey currently is operating on a stopgap budget adopted amid the strains of the coronavirus crisis.

The tax measures include a millionaires tax that Democratic lawmakers have previously resisted. It would raise the tax rate on income between $1 million and $5 million to 10.75% – an increase from 8.97%. That alone will raise about $390 million, Murphy said.

"This budget proposal is not simply about getting New Jersey back to where it used to be, but moving forward to where we need to be by building a new economy that grows our middle class and works for every single family, while asking the wealthiest among us to pay their fair share in taxes," Murphy said during his address from Rutgers University's SHI Stadium.

The goal of the proposal is to establish a $2.2 billion surplus in case a COVID-19 resurgence prompts another statewide shutdown, Murphy said.

The proposal also increases the cigarette tax by $1.65 per pack and boosts gun fees. It makes a temporary 2.5% corporation surtax permanent, reimplements a sales tax on limousines and removes the tax cap on boat sales.

The spending cuts span all executive state departments, including $336 million in Medicaid solutions and $66 million in solutions proposed by the Department of Children and Families. The cuts also include $59 million in Department of Corrections initiatives – which may result from the closure of a state prison, NJ.com reported.

The proposal also does not increase the financial burden on Medicaid recipients or cut the Child and Dependent Care Tax Credit.

The proposal also introduces the Baby Bonds initiative, which deposits $1,000 for any baby born next year to a family making up to $131,000 a year.

The initiative is expected to cover about 72,000 babies. Once they turn 18, they will be able to use the funding to pursue higher eduction, purchase a home, or pursue other wealth-generating activities.

The $4 billion in borrowing funds would mark a record amount, but it is significantly less than anticipated.

Last month, Murphy signed a bill that permitted New Jersey to borrow up to $7.2 billion between October and June. The borrowed funds must first be approved by a four-person legislative committee.

The nine-month budget must be enacted by October. The three-month, stopgap budget, which passed in June, expires once the extended fiscal year concludes Sept. 30.

The $7.6 billion stopgap budget cut about $1.2 billion in previously-authorized payments and deferred  another $1.8 billion in spending to help New Jersey meet its basic financial obligations during the COVID-19 crisis. It did not include any new revenue drivers or raise taxes.

The budget aimed to protect services that have been deemed essential to the state’s response to the coronavirus outbreak. It included a 5% reduction in funding for non-salary operating costs and a 10% cut in discretionary grants. It postponed a 2% wage increase for state workers.

It also delayed about $951 million in pension contributions and another $936 million in assistance for public schools, municipalities and NJ Transit.