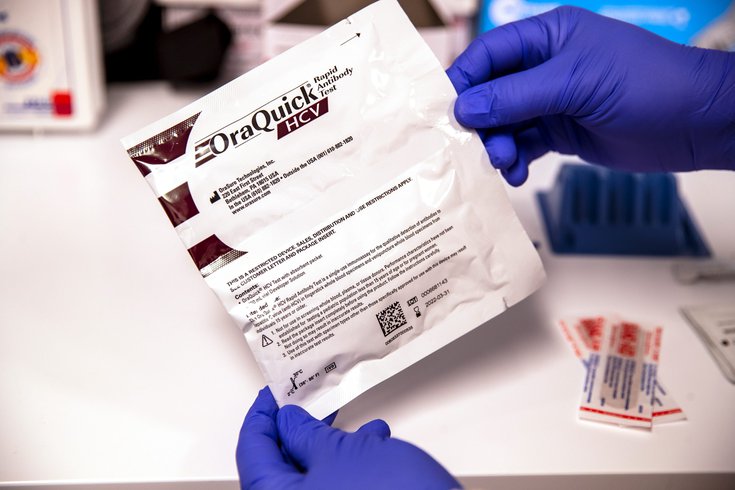 New Jersey lawmakers voted in favor of a bill that would decriminalize HIV transmission in some cases, but still retain penalties against people who do so with intent. Above is an oral HIV test.

The New Jersey legislature has passed a bill that would decriminalize HIV transmission, an effort to modernize state law so it does not discriminate against people living with the chronic health condition.

New Jersey law currently prohibits people who knowingly have HIV, AIDS or venereal diseases from engaging in an act of sexual penetration. The bill, S-3707, repeals this while maintaining provisions requiring people to inform their sexual partners of these illnesses.

"While working with advocates to identify areas to improve our harm reduction system of care, they identified updating these statutes to reflect what we now know about the transmission of certain diseases, especially in the light of the advancements of treatment, as a huge priority," said Sen. Joe Vitale, a Middlesex County Democrat and one of the co-sponsors of the bill.

Removing HIV/AIDS-specific language from the law still maintains the possibility for criminal conviction in some cases; however, the person living with the infectious disease must have "purposely" transmitted the disease to another person without their informed consent.

"This legislation is a step in the right direction of inclusivity and removing the stigmatization that surrounds individuals living with HIV," said Senate Majority Leader Teresa Ruiz, a Democrat representing the 29th District.

"Over the years, there has been criminalization targeting HIV-positive individuals, rather than those who are intentionally harming others. The criminal code is meant to punish actions that harm others, not discriminate against people living with a chronic health condition."

The bill heads to Gov. Phil Murphy's desk to be signed into state law.

According to the U.S. Centers for Disease Control and Prevention, New Jersey is one of 35 states that criminalize HIV exposure. During the early years of the HIV epidemic, many states implemented HIV-specific laws to discourage transmission and promote safer sex practices.

"After over 30 years of HIV research and significant biomedical advancements to treat and prevent HIV transmission, many state laws are outdated and do not reflect our current understanding of HIV," the CDC's resource page says. It describes many of the HIV-specific laws that currently exist across the country.

Since 2014, several states have repealed HIV-specific criminal laws. They include California, Colorado, Virginia, Illinois, Iowa, Michigan, Missouri, Nevada and North Carolina. According to the CDC, many of these updated, modernized laws also require the intent to transmit or actual transmission.

"The current law serves only to criminalize some of our most vulnerable populations, primarily those with HIV, dismissing what we know about the treatment of HIV and how it is and can be transmitted," Vitale said.

These laws often cite the use of HIV-preventative measures – condoms, viral suppression, or PrEP medication, for example — as a method of defense against criminal action.

Another New Jersey senate bill, S3009, seeks to promote harm reduction strategies by expanding the state's syringe exchange program. Sponsors of the legislation, which passed Jan. 10, say it would help vulnerable communities, including those who are HIV-positive, and would reduce the risk of HIV-transmission for those using drugs.

The South Jersey AIDS Alliance applauded New Jersey lawmakers for passing the syringe exchange expansion, noting that syringe exchange programs have a "proven history of reducing the incident rate of HIV/AIDS and other bloodborne pathogens."

Pennsylvania currently has laws that criminalize or control behaviors of those living with HIV. Rep. Malcolm Kenyatta, a Democrat from Philadelphia, spoke at a State House hearing in October to promote the decriminalization of HIV/AIDS exposure.

"HIV is not a crime but there are outdated laws that make it a crime in Pennsylvania," Kenyatta said. "We cannot have people losing lives and livelihoods because of this."