Frank James, 62, previously had been identified as a person of interest in the investigation 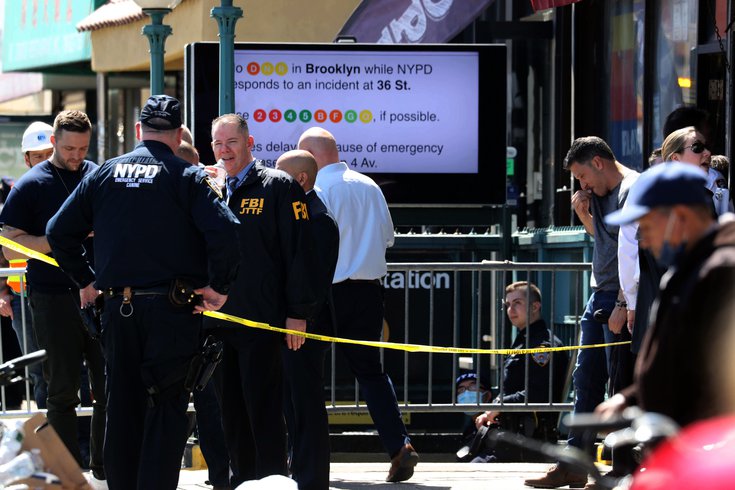 A gunman shot at least 10 people aboard a New York City subway train Tuesday morning in the Sunset Park neighborhood of Brooklyn.

Authorities said that James, 62, fired a number of gun shots that seriously injured 10 people inside a subway car at a Brooklyn subway station. Investigators linked the gun allegedly used in the attack to James and an Ohio pawn shop, according to NBC News. A search for James' whereabouts is ongoing.

Frank Robert James is WANTED in connection with firing numerous gunshots inside of a subway car causing serious injuries to 10 victims. There's a reward up to $50,000 for info leading to the arrest & indictment of this person. Any info contact @NYPDTips or call 1-800-577-TIPS. pic.twitter.com/KishVISIW1


A man with connections to Philadelphia has been named a suspect in the investigation of the mass shooting on a New York City subway train, Mayor Eric Adams said Wednesday.

Frank James, 62, who has addresses in Philadelphia and Milwaukee, Wisconsin, rented a U-Haul truck that is connected to the shooting, police said. He previously had been considered a person of interest.

Investigators found a credit card with James' name on it at the scene of Tuesday's shooting, which wounded at least 10 people, police said. They also found a key to the U-Haul James rented in Philly near the Brooklyn subway station where the train stopped.

A U-Haul van matching the description and Arizona license plate sought by police was found Tuesday afternoon parked near the scene of the attack.

The van has a Philadelphia address and the words "Allegheny West" written on one side, according to NBC10. U-Haul has a storage facility located at 2001 W. Hunting Park Ave. in the city's Allegheny West neighborhood.

Police said James had rented the vehicle sometime over the last several days, drove it from Philly to New York City and abandoned it close to the subway line where the shooting took place.

This is Frank James who is a person of interest in this investigation. Any information can be directed to @NYPDTips at 800-577-TIPS. pic.twitter.com/yBpenmsX67

A gunman wearing a gas mask and a construction vest set off a smoke grenade and fired at least 33 bullets in a subway car at around 8:30 a.m. Tuesday in the Sunset Park neighborhood of Brooklyn.

At least 10 people were shot, police said. Nearly 30 people were hospitalized due to gunshots wounds or smoke inhalation. Five people were in critical condition, but no injuries were considered life-threatening. No fatalities have been reported.

A .9-millimeter handgun, extended magazines, a hatchet, detonated and undetonated smoke canisters, a black garbage can, a rolling cart and gasoline also were found at the scene of the shooting, police said.

A magazine jammed in the gun, which authorities say possibly saved lives and prevented the weapon from continuing to fire.

Investigators said that the gunman's motive was unknown and that the attack was not being probed as terrorism.

The search for the gunman remains ongoing. Anyone with information is urged to contact New York City police at 800-577-8477. A $50,000 reward has been posted for information that leads to an arrest.

Philadelphia Police Commissioner Danielle Outlaw tweeted Tuesday that the department was assisting the NYPD and FBI investigators in their search for the shooter.