The 62-year-old, who allegedly rented a UHaul truck in Philadelphia, was captured thanks to a Crime Stoppers tip 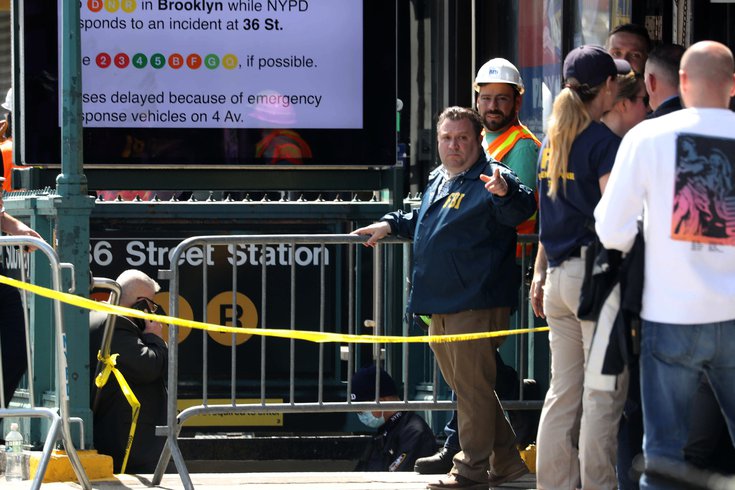 Members of the NYPD work at the scene of the Brooklyn subway shooting on Tuesday morning. Frank James, the man accused of opening fire on the Manhattan-bound train, was arrested Wednesday afternoon amid an ongoing investigation.

The man accused of unleashing a hail of gunfire on a Brooklyn subway was arrested Wednesday after a frantic manhunt that lasted 30 hours.

Frank James, 62, was taken into custody after police received a Crime Stoppers tip from a person who spotted him at a McDonald's in the East Village in Lower Manhattan. Investigators had circulated photos of James online in an effort to track him down.

The attack happened onboard a Manhattan-bound train in Brooklyn's Sunset Park neighborhood Tuesday morning. James allegedly wore a gas mask and a construction vest as he set off a smoke grenade in the subway, firing at least 33 bullets around 8:30 a.m. before he escaped the scene undetected. Ten people were shot; 19 others were injured.

At a press briefing Wednesday afternoon, NYPD officials and federal authorities said James was taken into custody a few blocks away from the McDonald's where a person recognized him. Police found James standing on a street corner and he surrendered without resisting.

Watch as @nycmayor and NYPD Executives provide an update on yesterday’s shooting incident in Brooklyn. https://t.co/x1QIRLVuXt

Information is still being gathered about James' background and how he allegedly carried out the attack, but some details have begun to come into focus.

James allegedly rented a U-Haul with a Philadelphia address that he used to travel to Brooklyn, carrying a range of weapons and supplies that were used in the attack. At the scene of the shooting, police recovered a .9-millimeter handgun, extended magazines, a hatchet, detonated and undetonated smoke canisters, a black garbage can, a rolling cart and gasoline.

The U-Haul, which had the words "Allegheny West" written on one side, was found abandoned on the side of a highway near the subway line where the shooting took place. Investigators found the vehicle after locating the key at the scene of the shooting.

James has ties to Pennsylvania, New Jersey, Wisconsin, Ohio and New York, according to authorities. He had an extensive criminal record including burglary, theft, sex offenses and minor infractions that resulted in a series of arrests in New Jersey during the early 1990s and again in 2007.

The 9mm semiautomatic Glock recovered by police was traced to a licensed firearms dealer in Ohio, where James allegedly purchased the gun in 2011, investigators said. He was able to do so because he had no prior felony convictions.

According to investigators, a magazine that became jammed in the Glock prevented him from wreaking further harm.

Frank Robert James had nowhere else to run or hide — and is now in NYPD custody. The work of our detectives is second to none and the dedication of our patrol officers is never ending. pic.twitter.com/uOXliUvoJ7

In the hours after the shooting, authorities scoured social media and uncovered YouTube videos that featured James making violent threats and ranting about the policies of New York City Mayor Eric Adams, including issues related to mental health services and race.

Authorities said the investigation remains in a very early stage and that a concrete motive for the attack still remains unclear. Witnesses who were onboard the subway have been contacted to share details about how the incident unfolded.

At the press briefing, police said the public awareness created by the photos of James were critical in bringing him into custody.

James is being held at an NYPD facility during the ongoing joint investigation.

"We hope this arrest brings some solace to the victims and the people of the city of New York," NYPD Commissioner Keechant Sewell said. "We used every resource at our disposal to gather and process significant evidence that directly links Mr. James to the shooting. We were able to shrink his world quickly. There was nowhere left for him to run."