Five Below aims to double presence in Philly, triple number of storefronts nationwide

The expansion is part of the youth-centric discount chain's plan to double annual sales to $5.6 billion by 2025 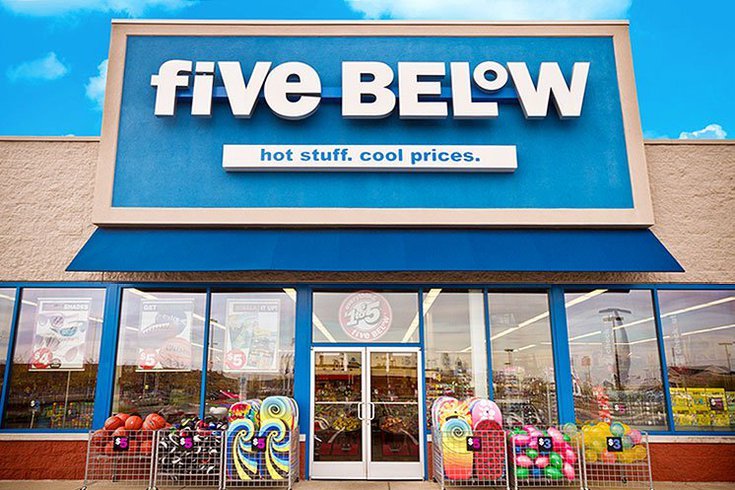 Five Below, a Philadelphia-based chain of discount stores, plans to double its number of locations in the city to 120 and triple its number of storefronts nationwide to 3,500 by 2030.

A chain of discount stores based in Philadelphia that focuses on young shoppers and is known for its wide variety of toys and other items that cost less than $5 has big plans for the next few years.

To accomplish this, the chain will place more of an emphasis on its "Five Beyond" items – which cost between $6-$25 – that appeal more to older shoppers and debut a new prototype layout which prioritizes those items.

Five Below plans to expand into new markets and strengthen its presence in areas that already have stores.

The new stores and 750 existing locations slated for renovations will feature a new "store-within-a-store" for the Five Beyond line and a revamped self-checkout system. They will also offer a wider array of items and services including balloons, room decor, ear piercings and pet products.

The company is also looking to bolster its tech department in accordance with its investments in the video game industry.

Five Below has entered a partnership with popular gaming YouTuber Kyle Giersdorf, who is better known by his screen name "Bugha."

The 19-year-old Pottstown native, who has amassed more than 4 million subscribers since he won the 2019 Fortnite World Cup, has released a line of headsets, keyboards and other gaming accessories at the store under the Bugha Gaming brand.

The company has also invested millions in Nerd Street Gamers, a startup based in Philly which runs a network of mostly in-person esports venues. Although the firm faced setbacks during the pandemic, it plans to open two new locations at Rowan University and Albright College.

Five Below's expansion is part of a broader proliferation of discount stores in the U.S. Other outlets aimed at price-minded shoppers like Burlington, TJ Maxx, Aldi and dollar stores have also expanded in recent years.

But Five Below's targeted focus on teens and tweens is unique for the sector. The low price point means that young people can shop independently with their own money in an environment Philadelphia Magazine characterized as "a little more grown-up than a toy store."

The company opened its first store in Wayne, Delaware County in 2002 and reached $1 billion in sales in 2016.

Founders David Schlessinger and Tom Vellios built the Five Below concept around kids spending their allowances.

Although the company's stock slid 3.4% late last month in the face of what CNBC called a "mixed" quarterly report, Five Below has made up all those losses in the first two weeks of April.