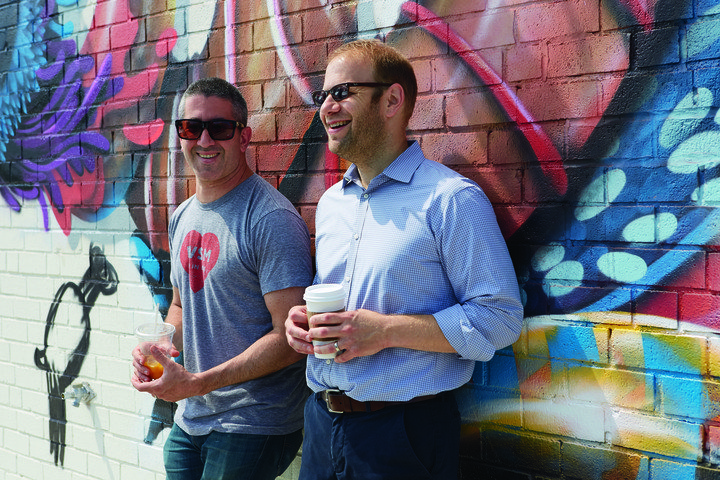 In his first cookbook, Zahav: A World of Israeli Cooking, chef Michael Solomonov reveals the secret behind his acclaimed hummus (“an obscene amount of tehina”) and explains how to recreate the iconic Zahav lamb shoulder at home.

But more than a collection of marquee recipes, the book is a deeply personal look at Solomonov’s life and career, and an effort to demystify Israeli cuisine for the masses.

“I think that Israeli food and Middle Eastern food can seem foreign to a lot of people, but Mike is in a unique position to demystify it and make it approachable,” said Cook. “People respond to Mike and his personality, and we tried to capture that in the book.”

Solomonov was born in Israel but grew up mostly in Pittsburgh as the child of an Israeli father from Bulgaria and an American mother from Ohio.

“The interest I have in Israeli cooking is through a very specific frame of reference,” he explained.

Solomonov’s perspective was heavily influenced by the death of his brother, David, who was killed by snipers on Yom Kippur in 2003, three days before his scheduled release date from the Israeli army. (Solomonov opened up about his struggle with loss and addiction in The New York Times last year.)

After Solomonov teamed with Cook at Marigold Kitchen in 2005, “I began to see cooking as a powerful way to honor David’s memory,” he writes in the book. “I could expose people to a side of Israel that had nothing to do with politics and didn’t ever make the evening news.”

The cookbook also is a tribute to Solomonov’s mother, Evelyn, who passed away just last month.

“She would make honey cakes all the time and have them shipped to the United States,” her son said. “She died on Rosh Hashanah, and she had a jar of honey sitting on her kitchen counter unused. So being able to share her honey cake recipe or her riff on brisket or my grandmother’s borekas [flaky filled pastries] and talk about my brother, it is quite personal and that’s what we wanted the book to be.

“In addition to that, we want people to understand that Zahav is a badass restaurant full of employees who work their asses off and believe in what we do,” Solomonov insisted.

At the nationally lauded restaurant and in the book’s recipes, Solomonov isn’t aiming for absolute authenticity. Rather, the chef seeks to capture what he calls the magic of eating in Israel — pita and hummus; bright vegetable salads; endless plates of mezze; charcoal-grilled meats on sticks; and, perhaps most importantly, warm hospitality. 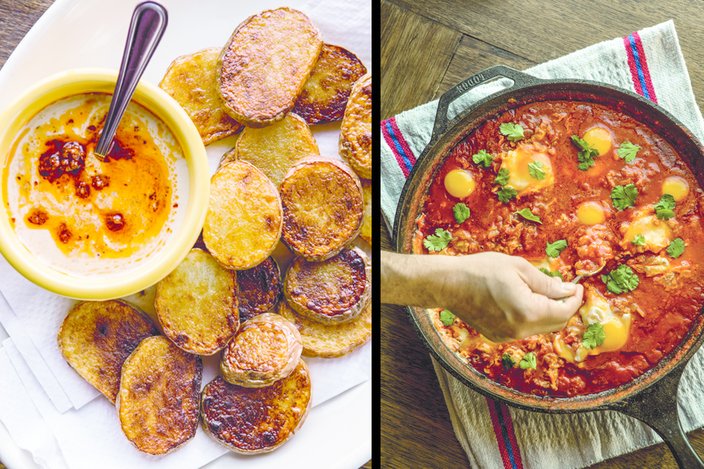 Photograph from Zahav: A World of Israeli Cooking by Michael Solomonov and Steven Cook. Photography copyright ©2015 by Michael Persico.  Used by permission of Houghton Mifflin Harcourt. All rights reserved.

He’s also on a mission to get American cooks better acquainted with products like sumac, freekeh (cracked wheat berries) and orange blossom water.

“Just because an ingredient sounds unfamiliar or exotic doesn’t mean it’s hard to find or difficult to use,” Solomonov writes.

There’s a whole chapter devoted to tehina, that foundation of Israeli hummus that also pops up in countless other dishes at Zahav, like Fried Potatoes with Harissa Tehina.

“Without tehina, Israeli food doesn’t work very well,” said Solomonov, who buys almost 1,400 pounds of the sesame paste a month from Soom, a local vendor. “Good tehina is super, super pure. And it doesn’t sit around that long,” he said, referencing the dusty cans of separated sludge with which many Americans are familiar.

With friendly, conversational head notes, the book’s recipes are geared toward the home cook.

“All of the recipes were really well tested by Joy Manning [local writer and editor of Edible Philly],” said Cook. “We went to great lengths to make sure that they’re doable in a home kitchen.”

They also frequently offer variations, like this one for simple, comforting Shakshouka.

“It can be bedazzled with all sorts of things, from merguez (or any other sausage) to feta or Parmesan cheese,” Solomonov writes.

It’s less about specific ingredients and more about the approach and willingness to try, Solomonov explained about the cookbook.

“I really just want people to be ok with f------ things up; that’s what cooking is. I hope that we made it comfortable and approachable and non-threatening, and I hope that people maybe get a different impression of Israel.”