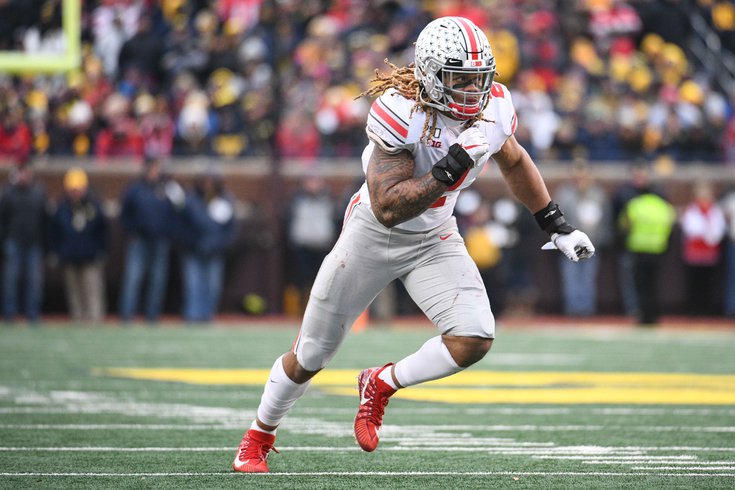 After focusing on the Philadelphia Eagles' draft since last Thursday, let's take a look around at the rest of the NFC East, one team at a time, starting with the cellar-dwelling Washington team.

• Pick 2: Chase Young, DE, Ohio State: There was never any real doubt that the Washington team was going to take Young with the second overall pick. He was the best prospect in college football, and many draft analysts have referred to him as the best pass rushing prospect they've ever studied.

Under the Bruce Allen regime, the Washington team built a solid defensive front with high picks, and Young could take that unit to the next level. This is the fourth straight year they have spent a first round pick on a defensive lineman or edge rusher.

Add in veteran borderline Hall of Famer Ryan Kerrigan, the improving 2017 second-round pick Ryan Anderson, and productive hustler Matt Ionnidis, and Washington really has something up front. They're going to be tough to block.

• No second-round pick: Washington didn't have a second round pick because they traded it to the Colts last year to move up into the first round for edge rusher Montez Sweat. They were widely praised for that move at the time. The details of that trade:

Because Washington finished 3-13 and were picking 2nd overall in this draft, they are giving up 300 points on the draft value chart on that deal, though Sweat did have 7 sacks as a rookie.

• Pick 66: Antonio Gibson, RB/WR, Memphis: Gibson was a versatile playmaker for Memphis, working out of the slot, as a running back, and as a kick returner. He is stoutly built, and he has some juice, as he ran a 4.39 40 at the Combine at 228 pounds.

I think he'll play running back for Washington.

• Pick 108: Saahdiq Charles, OT, LSU: On talent alone, Charles probably would have been a Day 2 pick, but character concerns dropped him to Day 3. He missed six games in 2019 for disciplinary reasons, and several teams reportedly didn't have him on their draft boards as a result.

Charles has good athleticism, but his length is concerning for a tackle. He's only 6'4, with 33" arms, which puts him in the ninth percentile at each measurement. Washington may also view him as a guard.

If they think he's a tackle (or will at least allow him to work there to begin with), with the depth chart as currently constructed, Charles will likely compete with free agent acquisition Cornelius Lucas and 2018 third-round pick Geron Christian for the starting LT job, which is looking like a potential trouble spot for Washington this season.

• Pick 142: Antonio Gandy-Golden, WR, Liberty: Gandy-Golden finished fourth in the nation in receiving, with 79 catches for 1,396 yards and 10 TDs. At 6'4, 223, with an impressive 22 bench reps, he is a big, strong receiver with good hands who wins in contested catch situations. He does not have good speed, as he ran a 4.6 40. He could be a nice complement to the speedy Terry McLaurin.

• Pick 156: Keith Ismael, C, San Diego State: With the injury issues the Washington team has experienced along their OL, it makes sense for them to continue to add depth, and Ismeal is a versatile guard/center prospect.

• Pick 216: Kamren Curl, S, Arkansas: I won't pretend I know anything about this guy.

• Pick 229: James Smith-Williams, DE, NC State: Impressive athlete who was unable to stay healthy in college, and who struggled to produce when he played. This late in the draft, however, he was worth a flier.

GRADE: This team has a loooong way to go before they become Super Bowl contenders. As such, it was sort of a no-brainer to take the sure-fire stud pass rusher over a quarterback with significant injury concerns in Tua Tagovailoa.

Dwayne Haskins will have a chance to show what he can do in 2020, and if he proves that he is not "the guy," then Washington should be in a position to draft a quarterback in what should be another appealing group in 2021. If he does show something, then great.

Obviously, the second overall pick was their biggest decision this offseason, and while I believe it was an easy one, they still nailed it.

Otherwise, I liked the Gibson and Gandy-Golden picks, but the selection of Charles early in Round 4 is a risky one, especially for a team with a new head coach who is trying to re-make the culture.