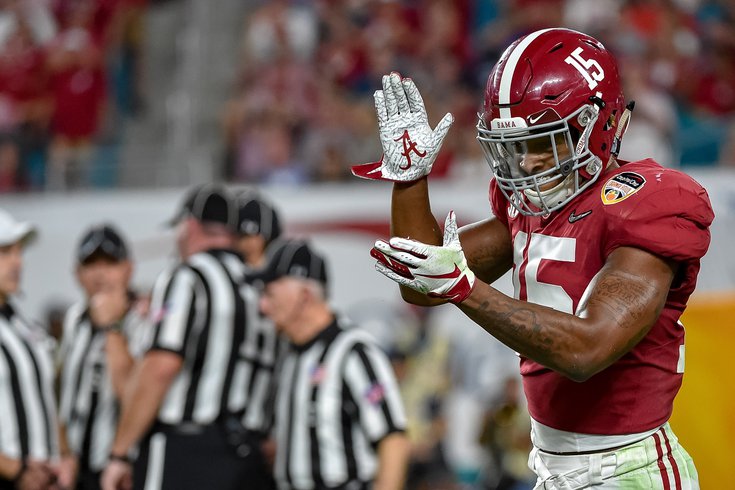 Xavier McKinney should start immediately for the Giants.

After focusing on the Philadelphia Eagles' draft since last Thursday, let's take a look around at the rest of the NFC East, one team at a time. On Wednesday we started with the cellar-dwelling Washington team. Today we'll cover the New York Giants.

He also played both tackle positions at Georgia, so he can play RT as a rookie, and move to LT when the Giants are finally able to get out of Nate Solder's awful contract next offseason. Thomas makes sense, and the Giants are trying to build a quality line that they have lacked for a long time. All that is great; golf claps all around.

However, it was no secret that the Giants wanted to trade out of this pick. After making the pick, it's easy to see why they'd have preferred to get out of that spot and acquire more picks. Thomas was merely one of four talented offensive tackles in this draft that went top 13, and probably the least physically impressive of the four, at least from an athletic measurables standpoint.

The Giants got a good player at a position of need, but it'd be interesting to know what kinds of offers they had to move back. This is a boring, but safe pick. It is probably not going to have the impact you're hoping for when you hold the No. 4 overall pick if you're a Giants fan that had to suffer through a dreadful 4-12 season in 2019, but it's a more sensible pick than a guy like Isaiah Simmons would have been, in my view.

• Pick 36: Xavier McKinney, S, Alabama: McKinney is a versatile playmaker who drew comparisons to another former Bama DB in Minkah Fitzpatrick. McKinney was only a starter for two years in college, but he put up impressive numbers in a defense where there sometimes aren't enough big plays to go around:

McKinney can play either safety spot, and he was comfortable covering running backs, tight ends, and slot receivers. He's also an aggressive tackler, and a savvy blitzer. A highlight reel:

At pick No. 36, that's very good value for a Giants team desperately in need of some leadership on defense.

• No original third round pick: After consecutive losses to the Cardinals and Lions in October, the Giants were 2-6, and their season was basically over. So what did Dave Gettleman do? He traded a third-round pick (which became the 68th overall pick) and a fifth-round pick in 2021 to the Jets for Leonard Williams, essentially for 8 games. Lol.

After being unable to agree on a long-term deal for Williams, who had 0.5 sacks last season, the Giants franchise tagged him. Williams now has the second-largest cap number on the team in 2020, at $16,126,000.

At the 68th pick, guys like OLB Zach Baun or C Matt Hennessy were still available and would have made a lot of sense. I'd sure as hell rather have either of those players than Williams for one year at over $16 million.

• Pick 99 (third round compensatory): Matt Peart, OT, UConn: Peart played for a UConn program that went 9-39 in the four years he was there, and he still managed to get noticed as an NFL prospect competing at the Senior Bowl. In his time there, he racked up a lot of experience starting all four years, playing left tackle for two season, right tackle for two season, and even occasionally filling in at guard.

Peart's floor is as a swing tackle, and he has a chance to develop into a good starter. Really good pick.

• Pick 110: Darnay Holmes, CB, UCLA: Holmes was one of my favorite players at the Senior Bowl this year. He has decent enough athleticism, he competes like hell for the ball in the air, and he plays with swagger. He also brings special teams ability to the table, both as a returner and on kick/punt coverage.

The Giants' corners were a mess in 2019, and Holmes was good value in the fourth round.

• Pick 150: Shane Lemieux, OG, Oregon: Lemieux started all four years at Oregon, with 52 total starts, all of which were at left guard. The Giants already employ a LG in Will Hernandez, who isn't moving to a new position anytime soon, so if Lemieux is to ever crack the starting lineup, it's going to have to be either as a result of a Hernandez injury, or at one of the other interior OL spots.

In that respect, Lemieux's selection by the Giants isn't a perfect fit, but Lemieux was good value in the fifth round, so it's hard to knock it.

• Pick 183: Cam Brown, LB, Penn State: Brown is an excessively tall off-ball LB at 6'5, 233, who will probably have to fill out his frame no matter where he plays in the NFL. The bet here is that the Giants will try to make him into a 3-4 rush LB.

• Pick 255: Tae Crowder, LB, Georgia: Each of the Giants' final three picks were not invited to the Combine.

GRADE: To my surprise, I like each of the first five picks the Giants made. After the first five, they had a 6 and four 7's, and while I'm not a huge fan of most of those later picks, meh, who cares?

Thomas and McKinney will start immediately. On a team as bad as the Giants, Holmes and Lemieux will have a chance to start as well. The only real negative, as pointed out above, is that they didn't have their own third round pick after the absurdly stupid trade for Leonard Williams.

Overall though, the Giants made smart picks, and they got better as a football team.