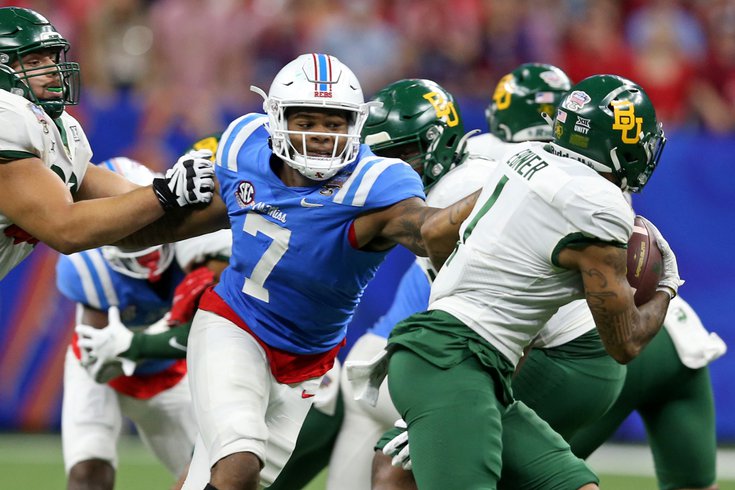 Ole Miss edge defender Sam Williams was destined to be drafted by the Cowboys.

After a free agency period during which the Dallas Cowboys objectively got worse as a football team, Jerry Jones and the gang could have really used a solid draft to help stay atop the crappy NFC East. Let's look at each of the Cowboys' picks and grade them on what they did.

• Pick 24: Tyler Smith, OT, Tulsa: The Cowboys lost two offensive line starters this offseason in LG Connor Williams and RT La'el Collins. Their two OL stars — LT Tyron Smith and RG Zack Martin — are aging, and Smith in particular probably can't be counted on anymore to play full seasons at this stage of his career. He missed five games in 2021, 14 games in 2020, and three games each in 2019, 2018, 2017, and 2016. As such, it seemed like the Cowboys were going to draft an offensive lineman come hell or high water. And that's what they did.

Smith is a considered a raw prospect coming out of Tulsa, but he has an intriguing blend of size and athleticism.

He also has a mean streak, and some fun highlights.

The early plan is for Tyler Smith to work out on the left side, both at LT and LG. That makes sense. He could be the LG initially, with a succession plan to take over for Tyron Smith whenever he is ready.

The Cowboys have been at their best in the draft when they select the best available player. In this case, they filled a need, but they probably left better players on the table.

• Pick 56: Sam Williams, EDGE, Ole Miss: Williams aligned as a 4-3 DE as well as a 3-4 OLB with experience dropping into coverage, and he has rushed from the inside on obvious passing downs. In his senior season, Williams racked up 12.5 sacks and 4 forced fumbles. He also impressed at the NFL Combine by blazing a 4.46 40 at 261 pounds.

So why didn't this guy go Round 1? Well, he's bad against the run, and until he gets that fixed he's going to be a sub-package player only. There are also serious off-field concerns, which makes him a natural fit for the Cowboys.

• Pick 88: Jalen Tolbert, WR, Southern Alabama: Tolbert has decent size and a career 17.6 yards per catch average. Over the last two seasons (23 games), he had 146 catches for 2559 yards and 16 touchdowns. That would be 111 yards per game during that span. Deep threat.

Michael Gallup and CeeDee Lamb will primarily be tasked with replacing Amari Cooper's production, and Tolbert will likely be asked to contribute as a third or fourth receiver. He was decent value at pick 88.

• Pick 129: Jake Ferguson, TE, Wisconsin: Ferguson is a solid all-around tight end with no obvious deficiencies, but also no elite traits. He can block, and he's a decent enough threat in the passing game, making 145 career receptions at Wisconsin.

The Cowboys hit on Dalton Schultz in the fourth round of the 2018 draft. Ferguson should be able to step in and immediately be the TE2 alongside Schultz.

Waletzko competed at the Senior Bowl, and held his own against some highly rated edge rushers. He here is in the game (LT, green helmet):

Wow! Great job @matt_waletzko on the 2nd level LB! 💥 Making the most of his reps!!! pic.twitter.com/jWNqWttalA

I'd be lying if I said I watched any of North Dakota's games, but read any scouting report on Waletzko and they all say the same thing — that he needs to add functional strength, and is a multi-year project.

Biadasz is the only one of those players projected to start for the Cowboys in 2022, and there were no shortage of folks clamoring for Dallas to select Tyler Linderbaum to replace him as the starting center.

I guess you can maybe apply this point to developmental first-round pick Tyler Smith as well.

• Pick 167: DaRon Bland, CB, Fresno State: I'd be lying if I said I'd ever heard of Bland heading into this draft. He was rated as a priority undrafted free agent by Dane Brugler, and he was not among Lance Zierlein's top 60 CB prospects.

The Cowboys are no strangers to drafting relatively unknown corners, with the most notable recent example being Nahshon Wright in the third round of the 2021 draft.

Former LSU LB Damone Clark is undergoing spinal fusion surgery today after an MRI at the combine revealed a herniated disk, per sources.

One of the top linebackers in this year’s NFL Draft, Clark most likely will miss his rookie season, but is expected to make a full recovery.

There were some who thought Clark was a potential Day 2 pick.

The Cowboys have never shied away from drafting players with major injury concerns, and a flier on Clark in the sixth round is a reasonable enough gamble.

• Pick 178: John Ridgeway, DT, Arkansas: Ridgeway is an early-down run stuffer who had 39 tackles and 2 sacks for Arkansas in 2021 after transferring from Illinois State.

Time will tell how good the Cowboys' drafted players will be, but on the surface it doesn't appear that they made value picks, in that they selected players at positions of need significantly earlier than most were projecting. For example, their first four picks:

Only Tolbert could be considered a value pick, relative to pre-draft expectations.

Additionally, the Cowboys' continued gambles on character or injury concern players in the second round is puzzling, given that those gambles have more often gone badly. For example, recent Cowboys second-round picks with character or injury concerns include Kelvin Joseph, Trysten Hill, Jaylon Smith, and Randy Gregory. If it's not working, why continue to go down that path?