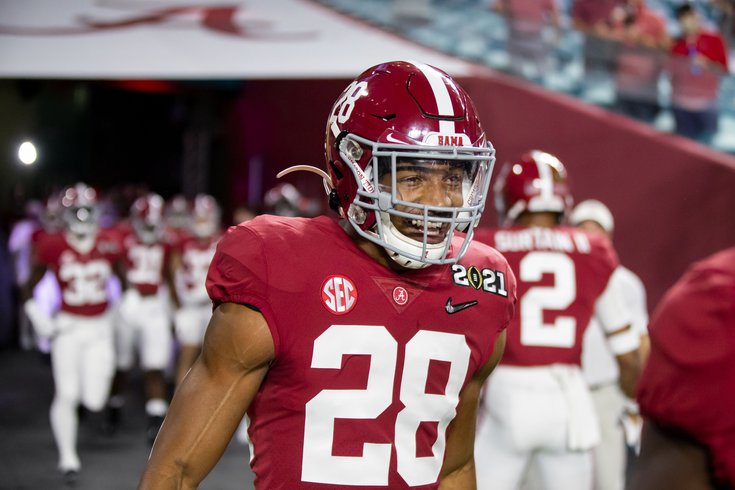 During the 2022 NFL Draft, the Philadelphia Eagles made five draft picks. After it was over, they reportedly added an additional 11 undrafted free agents. As a disclaimer, while reports of UDFA signings are usually correct, there are occasions in which a player is initially reported to have signed with one team, but instead they end up with another.

The chart below shows a snapshot of the Eagles' reported signings, and their rankings/grades via Dane Brugler of The Athletic and Lance Zierlein of NFL.com. We'll update this if/when more reported signings trickle in.

Because the 2020 college football season wasn't played in full, many prospects chose to stay in school for another year in 2021, when they otherwise might have declared for the draft. As such, the 2021 NFL Draft was a little more watered down than usual, both in terms of players who got drafted on Day 3, and ones that will became undrafted signees. In other words, the undrafted free agent class that year wasn't very intriguing.

This year, because so many players stayed in school an extra year, the undrafted free agency phase of the 2022 draft is thought to be loaded with draftable players, and the Eagles (reportedly) found some noteworthy additions. (H/t to Brandon Gowton of BGN for tracking down all these signing reports.)

Jobe is a rather well-known corner from a major program who was being projected as a possible Day 2 pick after a strong junior season in 2020 when he had 55 tackles, 11 pass breakups, and 2 forced fumbles. However, a down season in 2021, partly due to injuries, hurt his draft stock. A look:

It's interesting that Zierlein guessed that Jobe could move to safety.

Jobe looks the part as a well-built, long-armed perimeter cornerback, but a disappointing senior season ended up leaving scouts with more questions than answers. Jobe's tight hips and below-average pattern-matching attributes limit his chances for success in press man. Below-average instincts might keep him from becoming a playmaker in zone. He's likely to be pegged as a Cover 2 cornerback, but a move to safety might give Jobe his best chance for future success.

That would make sense, seeing as the Eagles signed two other undrafted corners.

Update: My understanding is that Jobe will play CB for the Eagles.

In Strong's three years as Nevada's starting quarterback, he posted the following numbers:

Strong's injury history is no doubt the reason he did not get drafted. He'll have a chance to compete for the No. 3 quarterback job with Reid Sinnett.

Perry is an athletic quarterback who ran a 4.65 40, with other impressive athletic measurables.

At Brown in 2021, he threw for 23 TDs vs. 14 INTs, and rushed for 402 yards and 7 TDs. A lack of quality arm strength will limit Perry's ceiling in the NFL, but he's a guy who can perhaps execute Nick Sirianni's RPO concepts.

UPDATE: Perry is headed to Jacksonville instead:

After an offer from the #Eagles and what appeared headed to an agreement, #Brown QB EJ Perry is starting a new chapter with the #Jaguars, per agent @seanstellato.

A new addition to the Frank Gore Hall of Fame! But seriously, there's no surprise here. Strong and Perry were considered the two best undrafted free agent quarterbacks, so it was odd that they had both signed with the Eagles.

Like Jobe above, Goodrich comes from a major college football program. He did not get much playing time early in his Clemson career, sitting behind a number of corners who are now in the NFL. As a senior in 2021, Goodrich had 42 tackles, 2 INTs (including a pick 6), 9 pass breakups, and a forced fumble.

Goodrich is thought of as a tough tackler who could be a decent enough fit in a zone scheme. He likely didn't get drafted because he ran a 4.52 at 176 pounds.

Imposing space-eater with flashes of physical dominance against a level of competition that hasn't fully tested him. Elliss was a heralded prospect out of high school and began his career at Mississippi State before transferring to Idaho, where his dad (former Detroit Lion Luther Elliss) coached him up on the defensive line. He has the physical tools and power to make a living as a two-gapping, odd-front nose guard but will need to improve his technique and footwork to become a true tree stump in the middle against the run. Ellis has Day 3 potential with starting upside, but weight management will be very important for him.

This is an interesting signing, after the Eagles already added Jordan Davis in the first round.

Sills has been a starter since 2017, initially with West Virginia before transferring to Oklahoma State. While he mostly played guard in college (both at LG and RG), it's easy to see why the Eagles had interest, from Brugler:

Sills is one of the few players in this draft class with college starting experience at all five offensive line spots, but he must play with better control to counterbalance his aggression.

The Eagles love them some OL versatility. Sills is thought of as a physical, body-moving run blocker who need work in pass pro.

Aggressive guard with broad, powerful frame but limited upside. Dunkle lacks the desired range as a run blocker and in his pass sets. He has decent knock-back pop in the early stages of the block but struggles to close the distance and consistently stay connected as a man blocker. Pass protection might be a bigger concern due to imbalance when asked to mirror counters and control the air space from gap to gap. Athletic opponents will cause him to struggle, but his size, strength and toughness give him a shot to find future starting reps even though his grade and tape is more in line with a backup role.

In his three years at Oklahoma, Brooks had an excellent yards per carry average.

Of course, those numbers were no doubt helped by the Sooners' explosive offense. A highlight reel:

Brooks doesn't have great speed or any obviously elite traits, but he has good vision, runs with patience, and when there are yards he should get, he gets them.

Obviously, the Eagles' return game has not been good.

Blackwell had 0 career INTs at Duke, but a 4.34 40 at Duke's pro day was certain to get him a look in someone's camp. From Zierlein:

Press-man cornerback with excellent speed and short-area quickness, but a lack of desired ball skills and instincts. At this point, Blackwell is a better athlete than cover corner and he lacks desired size for the perimeter. He will need to level up the technique and get tougher against the run before he is ready to play slot corner in the NFL. Speed and explosiveness will be intriguing, but his tape just isn't there yet.

Blankenship is a player that we profiled in each of the last two seasons, so he's a guy from a small school who has been on our radar for a while. He played five seasons at MTSU. His first three were highlighted by his takeaway numbers (8 INTs), while his last two were noteworthy for his high number of tackles (186 of them in 22 games).

The Eagles have some obvious needs at safety, and Blankenship felt to me like a late-round type of player who can contribute immediately on special teams and grow into a role in the regular defense. And yet, he's probably the lowest rated player among the Eagles' undrafted free agent class. Sleeper.

Fayad is undersized and he isn't athletically gifted (4.88 40 at WMU's pro day), but he had a very productive final season, collecting 12 sacks and 2 forced fumbles. Over his collegiate career, he had 28.5 sacks and 8 forced fumbles.

Tommy watched him and seems to think he's a player worth developing.

Williams began his career at Houston and then transferred to Miami. He started at RT for both schools. Williams is an agile, athletic blocker. He ran 5.16 in the 40 and had a vertical of 31 inches. That shows up on tape, not just workouts. The Eagles aren’t set at RT behind Lane Johnson. Williams has a chance to earn a roster spot if he plays well. He could also be a good developmental prospect, spending 2022 on the practice squad and then competing for a spot in 2023. Williams must learn to use his hands more consistently. His pad level can also be an issue at times. He has good tools to work with, but definitely needs work.