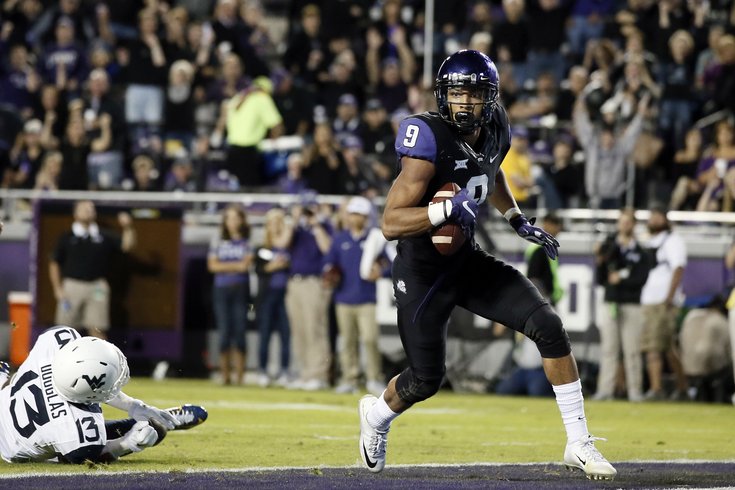 Josh Doctson will give Kirk Cousins another good option to throw to, along with DeSean Jackson and Pierre Garcon.

Continuing on with the final installment of our NFC East grades, we turn to the Washington Redskins. In case you missed any of our three previous NFC East grades posts, you can find them below.

Doctson is nice receiver prospect, but he's not a guy opposing defenses are going to be terrified of on Sundays. Unfortunately for Washington, this was a draft where there was a dropoff in talent once you got into the teens, and it wasn't a particularly good wide receiver draft.

In 2016, four receivers were taken in the first 23 picks -- Corey Coleman, Will Fuller, Doctson, and LaQuon Treadwell.

Cooks went 20th overall while Doctson went 21st. Doctson is nowhere close to as good a prospect as Cooks was when he came out. The value here reminds me a little of what the Eagles got a year ago when they selected Nelson Agholor 20th overall.

Still, when I look at the players taken after Doctson, I can't really find fault with the pick. It was just the wrong year to be drafting 21st overall.

As a player, Cravens is one of the trendy LB/S hybrids in the same mold of the Cardinals' Deone Bucannon. His mental makeup, however, has both been praised and criticized. On the one hand, Cravens is thought of as a highly instinctual player with a nose for the football. On the other hand, I was told he interviewed horribly, and even told teams that he did not like practicing.

Cravens' production at USC was good:

The Redskins need help at all three levels of their defense. Assuming he can stay focused during the looooong grind of an NFL season, Cravens can be a productive player.

Heading into this past college season, I thought Fuller was just as good as his brother Kyle Fuller, who was drafted 14th overall by the Bears in the 2014 NFL Draft. The two brothers have similar styles of play in that they're both physical corners, who are also sticky and make plays.

Unfortunately for Fuller, he tore his ACL Week 3 last season, hence his slide into the third round. If Fuller recovers fully, this could be a good value pick.

This isn't a splashy pick, but it's solid, as the Redskins needed interior defensive line help, and Ioannidis played multiple spots along Temple's defensive line. He'll be a little undersized heading to the pros but he has good quickness and hustle. In 2015, Ioannidis had 42 tackles, 3.5 sacks, and 5 batted passes.

During the offseason, we published about a dozen or so quarterback profiles, but never got around to Sudfeld, so any analysis here should be taken with a grain of salt.

That said, I remember being turned off after watching a great Indiana-Michigan overtime game in November of last year. With 3:38 remaining and Indiana down 7, the Hoosiers ran the ball 8 straight times, and scored to send it to overtime. On their first overtime possession, they ran it 5 straight times again, and once again scored.

To note, Indiana was not exactly gashing Michigan's defense on these runs. They had to earn every yard they were getting. In the second overtime, it was run-run-run-run, bringing it to 17 consecutive runs before Sudfeld threw incomplete on 4th down to end the game.

It just struck me as odd that Indiana was taking the ball out of the hands of a soon-to-be professional quarterback in such a big spot, so I just never bothered profiling him.

Daniels is a player I really liked heading into the draft, and I was surprised he fell to the seventh round. In 2013, Daniels finished third on his team with 88 tackles. In 2014, he was second with 72 tackles. And in 2015, he led the Eagles' defense with 82 tackles.

Bleh. Undoubtedly, that is why he was available in the seventh round. However, he's a good football player who can thump.

Marshall ran the fastest 40 time at the NFL Combine, at 4.31, which got him drafted. However, his production was limited at Georgia because of severe durability issues. Over the course of his four-year collegiate career, Marshall had just 253 total carries, 46% of which came in his freshman season way back in 2012. By comparison, there were 18 players who had more carries last year alone than Marshall had over his college career.

Still, in terms of height-weight-speed measuarables, Marshall is absolutely worth a seventh round flyer.

The Redskins needed help at all three levels of their defense, and they could get immediate contributions from Su'a Cravens, Kendall Fuller, and Matt Ioannidis. They also gave Kirk Cousins another weapon in the passing game to help him build on a surprisingly effective season a year ago that earned him the franchise tag.