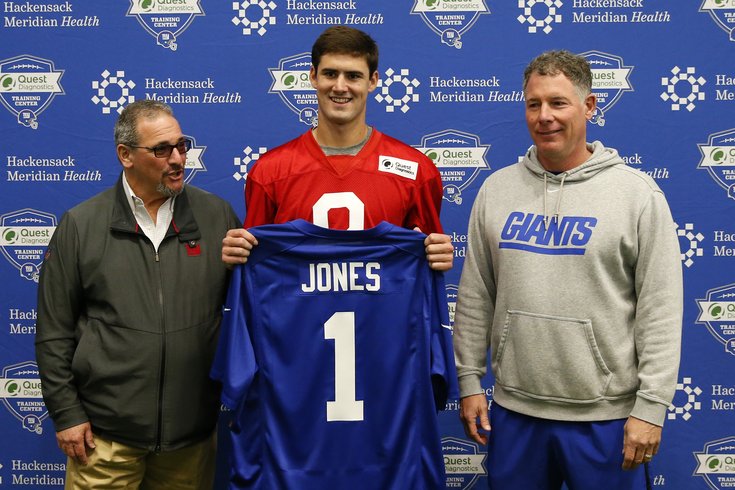 This GM-QB-HC trio does not rank among the league's elite, in my opinion.

Week 9 of the 2019 NFL regular season is in the books, and this is the time of year when teams start dropping from contention like flies. This week, we have our fourth obituary of the season. That would be the New York Giants, who we easily could have killed off weeks ago.

Giants (2-7): This offseason, rather than spell out 10 reasons the Giants are a dumpster fire in a traditional way, we instead laid out how Dave Gettleman was bumbling his Giants roster-building at literally every individual positional group. That piece ended up being almost 4,000 words, and it could have easily been much longer if I got real nit-picky.

Anyway, I thought it'd be a fun exercise to revisit their dumpster fire piece, and see how each positional group has gone.

• Quarterback: Gettleman spent all offseason saying how great Eli Manning still is, and that there was some absurd "narrative" that he isn't good anymore. Eli started all of two games, both losses, bringing his career record to an even 116-116, before he got benched for Daniel Jones.

Of course, Gettleman took a lot of heat for drafting Jones sixth overall, and he even admitted that the moment he knew Jones was his guy was when he was wowed by Jones' performance in a college all-star game in which he played three series, lol.

Jones had Giants fans all fired up after an impressive debut as a starter in Tampa, but the rest of the season has not been good. He has turned the ball over 16 times (8 INTs, 8 fumbles lost), which ties him with Jameis Winston for the most turnovers in the NFL, even though, again, Manning started two games.

Meanwhile, the Giants could have released Manning this offseason and saved $17 million on the salary cap. Instead, he's sitting on the bench, taking up $23,200,000 on the 2019 salary cap. Gettleman may as well just be flushing that money down the toilet.

• Running back: That "tick tick tick" sound you hear is Saquon Barkley's odometer rising in a lost season, with more to follow.

• Wide receiver / tight end: Gettleman took a ton of heat for trading Odell Beckham, and some Giants fans are no doubt pleased to see Beckham suffering through a bad season of his own with the 2-6 Browns. That doesn't change the fact that (a) Beckham is still counting for $16 million in dead money on their salary cap in 2019, (b) Golden Tate got suspended for four games after signing a big deal, and (c) Sterling Shepard, through no fault of the Giants in this case, has already suffered a pair of concussions after signing a big deal of his own.

• Offensive line: During the 2018 offseason, Gettleman made Nate Solder the highest-paid offensive lineman ever at the time his deal was signed, and he has been (we'll be kind) a bottom half of the league starting offensive tackle. That was an extremely easily identifiable terrible signing then, and it hasn't disappointed. He'll probably be gone this upcoming offseason after getting paid $35 million for two bad seasons.

• Edge rusher: The Giants traded away Jason Pierre-Paul and Olivier Vernon in consecutive offseasons, paying $23 million in dead cap to do so. They had the second-fewest sacks in the NFL in 2018, and while their sack total is up in 2019, this is still a bad pass rush.

Oh, and they also just traded third-and fifth-round picks to the Jets for Leonard Williams, a guy on the final year of his deal that the team could have just signed this offseason without giving up picks for him.

• Linebacker: Alec Ogletree still stinks, and he's counting for $11,750,000 this season. He'll be gone this offseason.

• Defensive backs: The Giants spent a first-round pick on Deandre Baker, who the Monday Night Football telecast seemingly had like 30 different ways of saying how bad he has been as a rookie.

Anyway, I guess this is the part where we post the infamous "Gettleman mocking analytics nerds typing" gif? Yes. Yes it is. 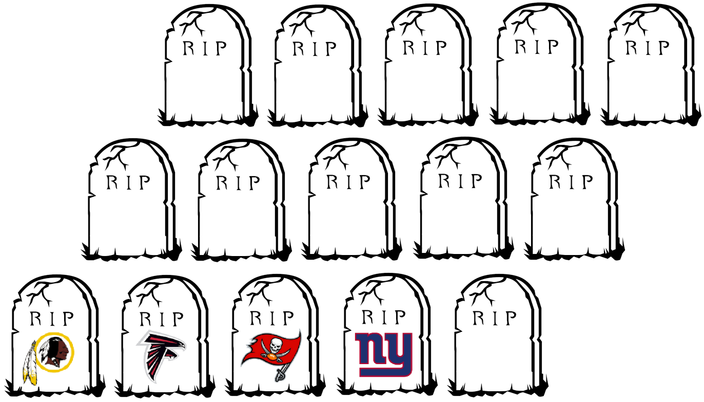 12) Bears (3-5): Obviously, we all saw how bad the Bears' offense looked behind Mitchell Trubisky, a bad offensive line, and lackluster skill players on Sunday. But they're also not being helped much by their head coach.

During the week leading up to the Eagles-Bears game, I asked Nagy a question in our conference call with him that centered around analytics, and if they're applied to in-game decision-making.

"We're not as big as some teams on the analytics," Nagy responded. No kidding.

11) Cardinals (3-5-1): Kyler Murray has gotten to face a lot of good teams in his first season in the NFL. Here are the five teams the Cardinals have lost to this season:

The combined record of those five teams: 33-8, or a winning percentage of 0.805. Murray will be better in 2020 and beyond having faced good competition in his rookie season, and not falling on his face.

• The Lions invested heavily in tight end T.J. Hockenson, when they used the eighth overall pick of the 2019 NFL Draft to select him.

So what did the Lions call on 4th and Goal at the end of regulation with a chance to tie the game in Oakland? A play in which none of the above players were on the field, and a pair of backup tight ends with a combined 15 catches on the season were the only guys out on routes.

Attention, play callers: It's not about you. It's about your best players.

Christian McCaffrey is on pace for 2,488. I mean, he's going to be dead by the time the playoffs come around if the Panthers make it that far, but it's at least fun to watch during the regular season.

8) Eagles (5-4): "A win is a win?" Even the Eagles' social media team realizes that their outlasting of the Bears on Sunday was super ugly, lol:

Also, DeSean Jackson is probably done for the rest of the regular season with his abdomen injury, and the Eagles did nothing at the trade deadline to find a receiver who can run a sub-4.8 40 and occasionally catch a football.

It was a bad bye week for the Rams on the NFC West front, as the 49ers improved to 8-0, and the Seahawks eked out a home win over the Bucs in overtime to get to 7-2. With an 0-2 division record, the Rams' chances of winning the NFC West are slim and none. On the wildcard front, the Rams were helped by a Vikings loss in Kansas City.

Perhaps here is the appropriate place to show a snapshot of the wildcard race after Week 9? Is it too soon for that? Ah, screw it. Here you go:

6) Cowboys (5-3): The Cowboys were unimpressive in New Jersey for three quarters against the horrendous Giants, until the game eventually went their way as a result of a pair of bad pass interference calls.

The pass interference call (or rather, lack thereof) should have been on Dallas' defense inside their own five yard line. It went uncalled initially on the field, and was then laughably upheld after Pat Shurmur threw his challenge flag. The NFL's owners agreed that pass interference calls could be reviewable calls, and they are allowing Al Riveron and the league's officials to simply ignore those rule changes, and uphold every clearly wrong pass interference call that gets challenged.

Anyway, the Giants settled for three points instead of having 1st and Goal inside the Cowboys' 5.

On the ensuing possession, facing a 3rd and 6 from their own 15, the Cowboys were gifted a very weak 26-yard pass interference call that allowed them to continue their drive instead of punting from deep in their own end. They would later score a touchdown on that drive.

That was a massive swing of points, and the Cowboys maybe don't win that game without the help of the officials.

5) Vikings (6-3): There's a stat floating around, and I don't know who to attribute it to, but apparently Kirk Cousins is now 0-10-1 in his Vikings career when trailing at any point in the 4th quarter of games.

Cousins actually did lead a drive that ended with a touchdown with 11 minutes left to play that gave the Vikings a three-point lead. However, on their next two drives (which were also their last two drives of the day) Cousins was 1 for 4 for -7 yards on a couple of three-and-outs.

4) Seahawks (7-2): Only seven quarterbacks in the NFL history have finished with a passer rating of over 115 in a single season (minimum 100 attempts). And yes, I know passer rating isn't a nerd-certified stat, but whatever. Five of the seven were named league MVP:

After a five-TD performance on Sunday, Russell Wilson has now thrown for 22 TDs and 1 INT this season. He has a passer rating of 118.2.

3) Packers (7-2): It sounds like the Packers enjoyed escaping the boredom of Green Bay when they went to Southern California this past weekend to take on the Chargers.

While Matt LaFleur said there were no curfew violations in LA, he did not disagree with what QB Aaron Rodgers said after Sunday's loss to the Chargers about the team not handling the 48 hours in California right.

Said LaFleur on Monday: "I think any... https://t.co/iNIJV1GpHA

2) 49ers (8-0): When the Niners played on Monday Night Football in Week 5, Booger McFarland wouldn't stop talking about FB Kyle Juszczyk for four hours. This was among my favorites from Booger:

Just realized the Niners are on MNF again next week. Booger gonna be fired up. pic.twitter.com/HJEBZ53nOn

Juszczyk should be back from an injury he suffered in that game Week 5, which should make Booger a very, very happy man.

1) Saints (7-1): The Saints had a bunch of guys out and few who were still pretty banged up for their last game against the Cardinals. This past weekend was good time for them to have their bye. They don't have a compelling matchup until Dec. 8, when they'll play the Niners at home.