Heading into Week 10 of the NFL season, we had only killed off five teams -- the Giants, 49ers, Bears, and Buccaners. In a special Hierarchy/Obituary with the NFL week already underway, we'll post one new obituary, the Arizona Cardinals. 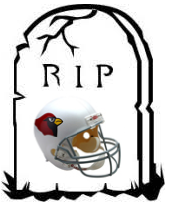 The four teams the Cardinals have beaten in 2017 have a combined record of 5-30. They were:

In their other five games, against legitimate teams, the they've been outscored 152-63. The Cardinals lost David Johnson Week 1 for a substantial period of time, thus ruining my (and many others') fantasy football season(s). They also lost Carson Palmer for the season, and are now rolling with Drew Stanton the rest of the way.

The Cards were recently a Super Bowl contender, but they got old. In fact, they were by far the oldest team in the NFL heading into this season. It's time for that team to rebuild. As for 2017, they are done.

11) Packers (4-4): The Packers are on life support heading into their Week 10 matchup with the Chicago Bears, where they are 5.5-point underdogs. If they lose, I think we can go ahead and pull the plug on them.

10) Redskins (4-4): The Redskins would have been considered for an obituary if they lost last week, but they pulled out a thrilling win in Seattle.

9) Lions (4-4): For those of you still alive in your survivor pools, the Lions feel like a no-brainer call on Sunday at home against the Browns.

8) Falcons (4-4): The Falcons are in big trouble if they can't take care of business against the Zeke-less Cowboys this week.

7) Panthers (6-3): Are the Panthers good or not? This team is really inconsistent, but still in pretty good shape to make the playoffs.

That is not going to be the same defense, obviously, without Richard Sherman.

4) Rams (6-2): The Rams' turnaround this season has been nothing short of amazing:

Doug Pederson has done a hell of a job, but I'd give my Coach of the Year vote to Sean McVay.

3) Vikings (6-2): Operating out of desperation, the Vikings traded for Sam Bradford when they lost Teddy Bridgewater for the season with a gruesome injury. On the same week they brought Bridgewater back to the 53-man roster, they placed ol' Sammy Sleeves on IR. In his 17 games with the Vikes, Bradford went 9-8, and once again, no playoffs. Hope that was worth a 1 and a 4 to Minnesota.

2) Saints (6-2): If I were to rank the most dangerous teams to the Eagles' chances of getting back to the Super Bowl this year, the New Orleans Saints (specifically in New Orleans) would top my list.