In a special 'Week 12 already in progress' NFC Hierarchy/Obituary, let's go ahead and take the opportunity to shovel more dirt on the Dallas Cowboys' grave, as they are the latest dead team to be eulogized. 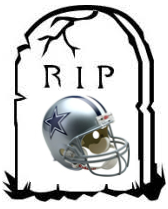 As you may or may not know, every year I publish my "dumpster fire series" in which I lay out 10 reasons each team in the NFC East could be a dumpster fire that season. They're meant to point out all the flaws of each team (every team in the NFL has them), in sort of a fun way.

Every year, without fail, there is severe backlash from fans who do not like hearing the negatives about their team. This year was no different with Cowboys fans, who strenuously objected the points that were laid out.

Anyway, let's take a quick look back at the 10 reasons we gave for why the Cowboys may be a dumpster fire this year:

1) The Cowboys are choke artists: Check. In their biggest game of the season, in a do or die matchup with the Eagles, the Cowboys folded faster than Superman on laundry day in the second half. They followed up that putrid performance with an embarrassing loss at home to the Los Angeles Chargers on national TV on Thanksgiving.

2) The Cowboys still don't have a pass rush: Well, they do have the NFL's sack leader in DeMarcus Lawrence, so we missed on that one.

3) The Cowboys are replacing most of their secondary: Check. They've given up the fourth-most TD passes in the NFL, and were God-awful on Thanksgiving against the Chargers.

4) Ezekiel Elliott seems like a jackass, and he may eventually pay for it: Check. I don't believe there's an explanation necessary here.

5) Elliott's body takes (and dishes out) a lot of hits: Meh. At the time he was suspended, Elliott was on pace for 382 carries, although he hadn't been injured at any point.

6) The Cowboys' OL suddenly has some potentially glaring holes: Check. La'El Collins is a clear downgrade from Doug Free at RT, and Jonathan Cooper is a downgrade from Ronald Leary at LG. Even before the Cowboys lost Tyron Smith, their offensive line wasn't impressive.

8) Jason Witten continues to decline: Check. His numbers continue to decline, and he's averaging a useless 8.6 yards per catch. He has 50 catches and only 20 first downs. Jason Witten is the poster child for Dak Prescott's unwillingness to take shots down the field. Even worse than Witten has been the plummeting career of Dez Bryant, who has looked like 'just a guy' all season long.

9) Dak Prescott had EVERYTHING going for him his rookie season: And at the slightest hint of adversity, he has stunk.

Anyway, the Cowboys have three straight losses and have scored one touchdown in their last 29 drives. They are indeed a complete and total dumpster fire. Thankfully, Cowboys fans are taking it well.

A look at the updated NFC standings:

To note, the teams who have not yet played this week were copied and pasted from Tuesday's edition.

9) Packers (5-5): The Packers have won four playoff games against NFC East teams (Cowboys twice, Giants and Redskins) in the last three years. They'll be dead after they lose in Pittsburgh next week.

8) Lions (6-4): TheLions now have a hurt quarterback and a divisional loss to the Vikings after Thanksgiving, however, they don't play another opponent the rest of the way that currently has a winning record.

7) Seahawks (6-4): The Seahawks are now a very flawed team with the losses of Richard Sherman and Kam Chancellor for the season. However, watching their game last night against the Falcons was a reminder that Russell Wilson is still really freaking good. This is a team that could play the part of the Packers this season, in that they have a quarterback that makes plays and can mask an otherwise shaky roster.

6) Panthers (7-3): This is a hot and cold team that is presently hot and on a three-game winning streak. After a road game this weekend against the Jets, they'll play the Vikings and Saints. If they can win one of those two games against the Vikings or Saints, they should be in good shape to get into the playoffs.

5) Rams (7-3): The Rams had a chance to really make a statement on the road against a good Vikings team, and then they put just 7 points on the board.

4) Falcons (6-4): Atlanta has an underrated defense, a quarterback who was the 2016 MVP, a star wide receiver, and great complementary skill position players. This is the team you do not want to have to face in your first playoff game coming off a first-round bye if you're the Eagles.

2) Saints (8-2): New Orleans looked vulnerable at times on Sunday, but they gutted out a big comeback win over Washington that'll help them build character. That offense is a handful.

1) Eagles (9-1): The entire roster has elevated their game, and this is the most complete team in the NFL.