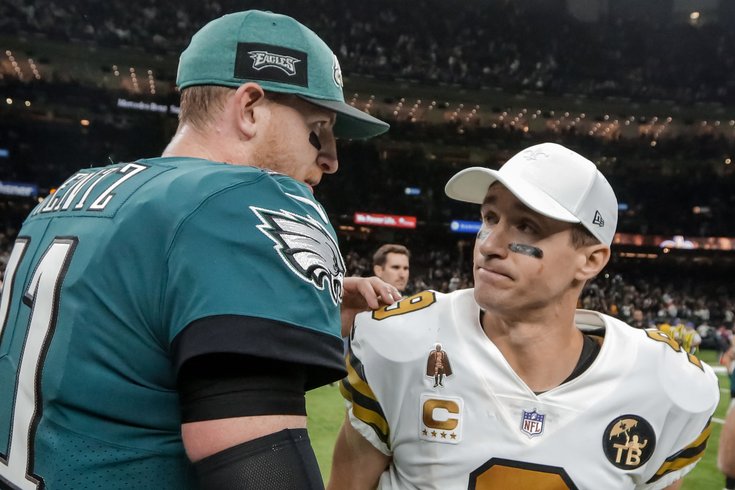 Thanksgiving is just a few days away, and the landscape of the NFC has clearly taken shape. The New Orleans Saints and Los Angeles Rams are in one category, a handful of teams are a few tiers below, and the rest is slop.

This week, there are no new obituaries, though I strongly considered killing off the reigning champion Philadelphia Eagles.

11) Eagles (4-6): The offense stinks, the defense stinks, the coaching staff has stunk, the front office has made ill-advised moves, the franchise quarterback is suddenly struggling, the team is banged up, and they're currently playing like one of the worst teams in the NFL.

The fall from grace from Super Bowl champions to the mess that Eagles fans had to witness on Sunday is truly remarkable. How did it get from being so good to so bad so quickly? The outcome of the season to date would have seemed impossible a few months ago, barring some sort of season-ending injury to Carson Wentz.

10) Packers (4-5-1): Aaron Rodgers has thrown for 19 TDs and 1 INT this season, and the Packers still have a losing record. That just goes to show you how crappy the rest of this roster and coaching staff is. If I'm Green Bay's front office, I'm finding a new staff this offseason. One Super Bowl win, eight seasons ago, with the best player on the planet, simply isn't good enough. It's time.

9) Falcons (4-6): I had the Falcons beating the Eagles in the NFC Championship Game before the season began. Oops. The NFL is weird.

8) WASTEAM (6-4): They were already without Trent Williams as well as starting guards Brandon Scherff and Shawn Lauvao. After Alex Smith's gruesome injury on Sunday, it's Colt McCoy's turn to run for his life behind that devastated offensive line.

And of course, just when things are looking their bleakest, that's when the football gods strike. WASTEAM will have to face the Dallas Cowboys on a short week on the road on Thanksgiving, and a loss would cede power in the NFC East to the Cowboys.

7) Seahawks (5-5): The Seahawks are just kind of quietly staying relevant, and would be the 7 seed, a half-game out of the playoffs, if the season ended today. They're not a threat to win a Super Bowl, however, after losing to the Rams by 2 in November and by 5 in December, they could perhaps serve as Ram-killers in the postseason, should they make it there. If I'm the Rams, I'd want no part of them.

6) Cowboys (5-5): Give them credit. After falling to 3-5 and half the internet dunking on Dak Prescott, the Cowboys beat two "should-be-good-but-aren't" teams on the road in the Eagles and Falcons, and have a chance to take control of the division this Thursday against the walking wounded Redskins. What can go wrong?

5) Panthers (6-4): Just like the Packers above, in Carolina, it's Cam Newton and not much else. The Panthers are frauds.

4) Vikings (5-4-1): After their loss to the Bears on Sunday, Mike Zimmer hinted that offensive coordinator John DeFilippo is installing too much into the playbook.

"Let's just play football," Zimmer said. "You run a really good out route, you run the out route. He runs a good curl, you run the curl. You know what I mean? So, maybe we just need to focus a little bit on not trying to trick the other team quite so much.

I was wondering when Zimmer would stifle DeFilippo. Seemed like only a matter of time.

3) Bears (7-3): One of the most underrated players in the NFL is Akiem Hicks. Against the Vikings he had 5 tackles for loss, a sack, and a couple of QB hits. The combination of him and Khalil Mack is really difficult for offensive lines to block. While the Bears are nowhere near the Saints or Rams in terms of Super Bowl aspirations, I do wonder what can happen if their front seven can make a few big plays in the passing game in the playoffs against either team.

2) Rams (10-1): Now that the Rams have gotten past the Chiefs in spectacular fashion Monday night, I can't see the Rams or Saints losing any more games, so it would appear that we're steamrolling toward an epic NFC Championship Game in New Orleans in late January.

1) Saints (9-1): After effortlessly putting 48 points on the board on the hapless Eagles on Sunday, the Saints are on pace to score 605 points this season. That would now be the second-most points in NFL history. Let's go ahead and update the following chart, in which the Saints, Chiefs, and Rams are on pace to score the second-, fourth-, and fifth-most points in NFL history.

They're 13-point favorites over the Falcons this week.