Week 2 of the NFL season is in the books, and while the Arizona Cardinals, Detroit Lions, and New York Giants are all probably one week away from having their obituaries written, we'll hold off for one more week before we dig their graves.

16) Cardinals (0-2): Sleevie Wonder's completion percentage is up around 61 percent, and yet, he's averaging 3.98 yards per pass attempt. According to the NFL's Next Gen stats, Sleeves' average throw lands 3.1 yards short of the sticks.

Five Cardinals players have receptions this season. Here are their stats, with their yards per catch highlighted:

That's pathetic. And yet, there's this:

Cardinals coach Steve Wills said the offensive play book will be scaled back to help players not have to think when they're on the field. https://t.co/i18AYbgr0e

How many different routes can there be where all five guys run around within five yards of the line of scrimmage?

15) Lions (0-2): In case you missed it, old friend LeGarrette Blount got ejected for coming off the bench and hitting 49ers linebacker Elijah Lee, who (legally) hit Matthew Stafford near the sideline.

The following is a clinic in hilarious announcing. First, Thom Brennaman, even with the advantage of replay, thinks Stafford was hit late when he's clearly still in bounds during the hit. Meanwhile, listen to how animated Chris Spielman gets about Blount hitting Lee after the play was over:

The Lions, to that point in the season, had already lost at home 48-17 to the Jets, and were down 30-13 to the Niners. If I'm a Lions fans, I'd just be happy to see that one of the players still has a pulse.

14) Giants (0-2): With a 7-0 deficit in the first quarter Sunday night, Pat Shurmur faced a fourth and inches decision from his own 48. And by inches, we mean just that: 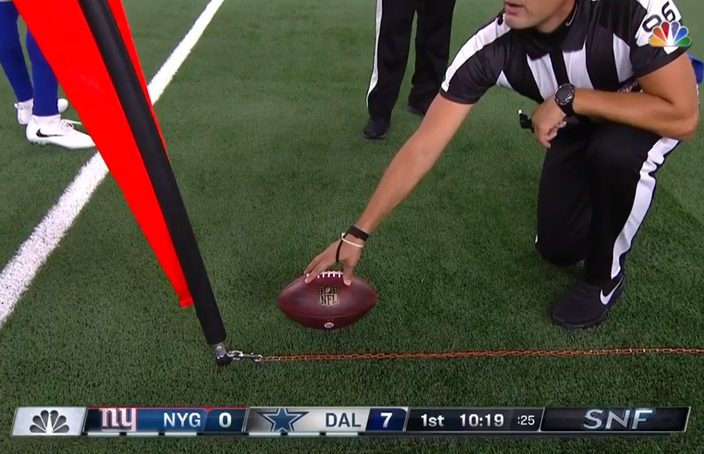 Despite selecting a 233-pound stud running back second overall in the 2018 NFL Draft, signing LT Nate Solder to the richest offensive lineman contract ever (at the time they did it), and taking a big, mauling LG in the second round, Pat Shurmur decided to punt!

Remember when the Seahawks and Cardinals owned the NFC West? Well, they could both be 0-3 when they face each other Week 4.

12) Saints (1-1): The Saints only beat the Browns, at home, because the Browns' kicker missed two field goals and two extra points. The Seahawks and Cardinals are done and on the way down. Did we maybe also miss that New Orleans could be joining them?

11) Cowboys (1-1): I'm guessing that the Cowboys fan at your job who is fired up about Dallas' win over the garbage Giants was sure to point out to you on Monday that the Cowboys have the lead in the NFC East on the strength of a divisional win.

The Cowboys may also win Week 3 and Week 4 over the trash Seahawks and Lions.

If they do, remind your office dork of this, from our non-Eagles rooting guide on Sunday morning:

• Giants at Cowboys: We covered this in a mailbag on Thursday, but in my view, neither team is a threat to win the division, so ideally you want each team to win some games to avoid having one of them picking in the top 5 of the 2019 NFL Draft.

The ideal scenario for an Eagles fan would be if Dak Prescott has enough positive moments this season where the Cowboys talk themselves into him as their long-term answer, and sign him to a huge franchise-crippling contract extension. No such thing is going to happen with the Giants and Eli Manning, presumably (though I can’t fathom how they still think he’s an answer even in 2018).

So I think you want the Cowboys to win, with Dak shredding the Giants defense. Cowboys fans will be annoying for a week if that happens, but it’ll be worth it in the long run.

Because really, that team is going nowhere with that offense.

10) WAS TEAM (1-1): I have heaped praise on this team in the early part of the season, which was perhaps ill-advised, as evidenced by a gross 21-9 loss to a bottom five NFL team at home.

8) Panthers (1-1): It's impressive that Cam Newton went 32/45 for 335 yards and 3 TDs, but it's going to be very difficult for him to sustain that level of play with both of his starting offensive tackles out.

7) Bears (1-1): In two games, Khalil Mack has 8 tackles, 2 sacks, 2 forced fumbles, a fumble recovery, and an interception that he returned for a touchdown. But it's not just Mack. Look at what they did to the Seahawks on Monday night:

Mitchell Trubisky looks shaky, but he's going to helped enormously by a Bears defense that looks like it's going to be very good for the foreseeable future.

6) Vikings (1-0-1): The standings will say otherwise, but the Vikings lost on Sunday. The following roughing the passer call on Clay Matthews negated a Packers interception with under two minutes to go:

It was only a matter of time before a call like this, as a result of some ridiculous rule changes, affected the outcome of a game. And there it was. The Vikings should rightfully be 1-1.

What has to be even more infuriating for Packers fans is this:

Clay Matthews called his critical roughing the passer penalty “a terrible call”, but I’m told the NFL is actually going to include that play — and #Vikings LB Eric Kendricks’ similar penalty — on a teaching tape that reiterates the “scoop-and-pull” technique is a foul. pic.twitter.com/psqwjN6N9q

GTFOH. I don't know why the NFL goes out of their way to hurt their own product.

4) Buccaneers (2-0): OK, I'm sold. That offense is explosive, they're fun to watch, and they're going to be difficult to stop. Enjoy your seat on the bench, Jameis.

3) Eagles (1-1): A 1-1 start wouldn't have surprised anyone with Nick Foles starting the first two games, though maybe the order in which they won/lost them was unexpected.

Anyway, Carson Wentz will return Week 3, and while Foles is a Super Bowl MVP, the difference in skill level between him and Wentz is night and day. Of course, Wentz will be throwing to guys like DeAndre Carter, Kamar Aiken, Shelton Gibson, and Josh Perkins, so there's that.

2) Falcons (1-1): The Falcons bounced back in a big way Week 2 against the Panthers, and Matt Ryan perhaps quelled some fears that he was on the decline. And hey, the Falcons actually targeted some other guys in the offense other than Julio Jones, as 8 guys caught passes, while Jones' targets were down from 19 (!) Week 1 to 9 Week 2.

I'm way higher on this team than most, but the Falcons can make a big statement in the NFC South Week 3 if they can win at home over the sluggish Saints Week 3.

1) Rams (2-0): So far, so good with all the talent the Rams added this offseason. After two weeks, the Rams lead the NFL with a point differential of +54, albeit against the Raiders and Cardinals. They'll have their first real test of the season against the Chargers Week 3.