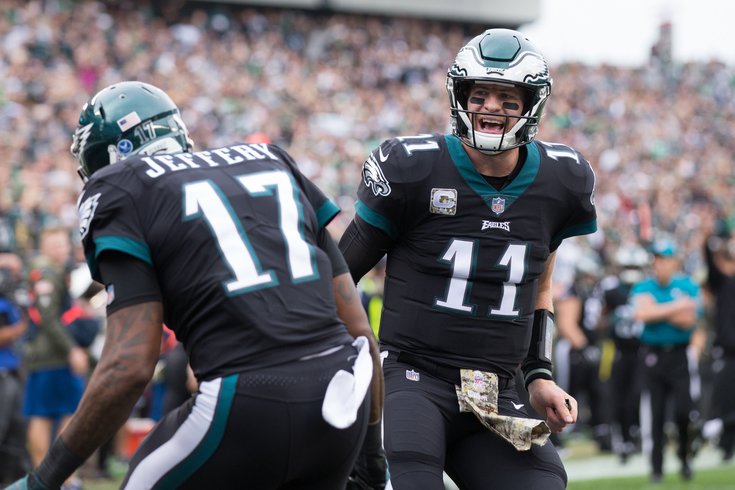 Typically, a Eagles' loss is treated like an apocalyptic event in Philadelphia. But just a day removed from a 27-21 loss to the Buccaneers in Tampa, Birds fans seem to be looking up — and not because they're afraid the sky is falling.

It's because head coach Doug Pederson finally made the announcement the city had been anxiously awaiting, even more so now that Super Bowl MVP Nick Foles’ preseason struggles seem to have carried over to the regular season:

Carson Wentz is back.

“You’ve been waiting on this day forever," Pederson said with a smile. "He’s been cleared, and we’re all excited about that."

Pederson also added that there was never a doubt Wentz would start as soon as he was medically ready.

"I mean he's cleared, he goes. I've said all along that he's our guy," Pederson told reporters at the NovaCare Complex. "We drafted him to be our guy. It's kind of like Week 1. I mean a lot of your starters, guys like Jason Peters, [Darren] Sproles, haven't been used to a lot of contact, a little bit in camp. But, yeah, we're cleared to go, and we'll go."

That being said, Pederson, a former quarterback himself, knows what it takes to get up to game speed, and understands that this isn't going to be a completely seamless transition back into the starting role.

"I think there's going to be maybe an issue or two," Pederson admitted. "It's going to take some time to get back into the rhythm and the flow of the game. The speed of the game is different than the speed of practice. We do everything we can to try to simulate that during the week and try to prepare him that way.

"And listen, he's a guy that will be totally prepared. He comes in early, studies the tape as do all the quarterbacks, stays obviously late in the day, asks a lot of questions, and has a lot of ideas. He's going to be prepared mentally.

"Now it's just a matter of the physical part taking over."

Wentz, sidelined since tearing his ACL and LCL back in Week 14 of last season, led the NFL with 33 touchdown passes in 2017, despite missing the final three games of the year. And when training camp opened in late July with Wentz participating in 11-on-11 drills, there was a surge of positivity suggesting the 25-year-old QB, against all odds, could be ready for Week 1.

MORE: It sure sounds like the Eagles are going to add a WR

As training camp progressed, however, and Wentz’s participation level waxed and waned according to the plan laid out by the medical staff, it became clear that Foles would be the guy to start the season.

Throughout camp, the only thing holding Wentz back from playing was final medical clearance from team doctors that would allow him to take part in contact drill in practice — and, obviously, in games. On Sunday, just prior to the Eagles loss to the Bucs, ESPN's Adam Schefter reported that Wentz was "on track" to get final clearance this week and would likely start against the Colts.

That “I’m back” feeling 🙌🏻 #FlyEaglesFly pic.twitter.com/0VFEAX8KsK

Despite the long rehab process, Wentz, known for being aggressive — sometimes to a fault, depending on who you ask — isn't about to change his style of play. Because Pederson isn't going to ask him to.

"But there are no limitations."

As for Foles, 29, it appears his time in the spotlight is coming to a close (at least for now). But what he did over the course of his last eight games won't ever be forgotten — at least not in Philadelphia.

Now, the Super Bowl MVP, through no fault of his own, returns to his life as a backup.

"The greatest thing for me is that [quarterback] room has no egos, and Nick all along has understood that this is Carson's football team," Pederson said. "We drafted Carson to be the guy. And we owe a lot of gratitude to Nick Foles for what he's done, what he has done, obviously what he's done this season and how he's led this football team. And he's a pro's pro. So, no egos. They check them at the door, and he'll be very supportive, has been very supportive, and will be that way from here on."

If Foles, who nearly retired a few years ago, never plays another snap again, he'll still be able to retire a Super Bowl champion and MVP. In the meantime, however, Foles seems content to go back to doing what he was doing last season, before that life-altering moment that thrust him into the spotlight in the first place.

“I’m grateful and blessed to have played this game as long as I have. Whatever the team needs of me, I’m going to do. I will help in anyway possible”#FlyEaglesFly pic.twitter.com/w2vNYKNJp3

Now, with wideout Alshon Jeffery's status still in doubt and fellow receiver Mike Wallace sidelined with a fractured fibula, the next question is whether or not Howie Roseman and Co. go get their quarterback some help.